“I love the people in the band! Everybody has a splash of creative mental illness.”

That’s how Boston underground scene mainstay William “Des” Desmond sums up the group of experimental artists and musicians who comprise his long-running audio/visual maelstrom, The Bentmen. For decades, the heavily costumed ensemble has amazed and befuddled audiences with multimedia live performances and an aural buffet that is equal parts Captain Beefheart, The Tubes, Tool and Killing Joke. This Friday, The Bentmen will hit the stage at the ONCE Ballroom in Somerville for their first full live performance in 11 years. No matter how many R. Crum comics and/or Zappa albums you might own, nothing – NOTHING – will prepare you for what you’ll witness when you make it out to the show.

Boasting a body of work and an inter-personal history worthy of a book, The Bentmen have spent 36 years slapping a warped smiley face on some of the more unpalatable elements of the American experience. Whether they’re crafting a song about Ted Kennedy’s doomed ride on a bridge on Chappaquiddick Island (“Lobster Bib”) or delivering an ode to a family of serial killers from Kansas (“The Bloody Benders”), the group guarantee an experience that will make you laugh while you wince.

While The Bentmen’s intense visuals are the stuff of legends and nightmares, the band’s greatest weapon is the extraordinary musicianship that drives the madness. In addition to Des, the current incarnation of the group includes Frank Coleman (drums/samples/interactive videos/vocals) “Crazy Eddie” Nowik (guitar), George Hall (guitar), Ross Kennedy (“human prop”/crowd agitation), Andrew Padua (bass), Scott Collins (guitar), Chris Burbul (backing vocals and antics), Tracey Stark (further antics), Geoff Chase (drums), Paul Robicheau (percussion) and Desmond’s wife, Katherine (keyboards). As a Google glimpse at the performance and album credits of these folks readily reveals, The Bentmen represent the cream of the crop of the New England music scene past and present. 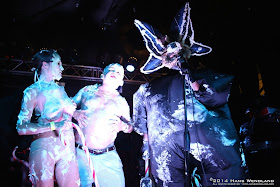 The Bentmen story began in 1982, when Desmond and his old high school buddy Woody Trenholm would get together and mess around with synthesizers and various outboard gear. While these get-togethers were based around having a little fun, the compositions the two created were far from typical party music.

“Immediately, it was evident that we were going to go in a very, very dark direction with it,” Desmond recalls. “Maybe that’s where our spirits were; I have no idea, really. I like very heavy music with a little bit of a cerebral touch, and society always irritated Woody. He had many complaints – and rightfully so – about human beings and how they treated each other. We started started writing songs based on the angst that we both had for society. We developed these silly songs; some of them were very, very twisted. It was a social commentary, really.”

The duo’s bizarre musings on the world around them first found a home on The Bentmen’s debut cassette, A Number of Beast-Like Forms.

“We found an ad for life insurance that was in this old magazine. There was this cartoon of this Blob-like creature sitting there gobbling up people’s money. It was warning people, ‘You want to buy insurance from us and not from the other monsters out there that are gonna suck you dry from your money.’ There was a whole list of different things that you wanted to watch out for, like ‘two-year modified death benefits.’ Well, there’s a title for one of the songs!”

Bolstered by early support from Boston College’s WZBC, The Bentmen quickly became a popular attraction around town thanks to a surrealistic live show that continued to evolve. Desmond’s use of costumes in his live performances was a carryover from his days with the pre-Bentmen band, The Replicant Rubbers, which also included Robicheau. All Bentmen outfits have been handmade since the beginning, making the most out of found objects to keep the budget down.

“I’ve gone across the street from my house and gone in the woods and broken off tress limbs and branches and made costumes out of that! It’s just there; it’s free.”

Along the way, the lineup expanded to include some of the most gifted players the city had to offer.

“I think Woody and I were onto something with this band early on. It’s not for everybody, but some of the better musicians in town really wanted to be a part of it. It wasn’t hard to get them.”

The sonic circus would eventually welcome Reeves Gabrels, then-guitarist for local heroes The Dark. Gabrels later found global acclaim by the close of the decade for his vibrator-as-plectrum exploits with David Bowie’s Tin Machine.

“Reeves is a wonderful player; nobody quite sounds like him. Frank Coleman always says, ‘What other band around Boston can brag that Bowie stole their guitarist?!’”

Gabrels returned to The Bentmen in the ’90s for the album Patient Zero, which also boasted appearances by Adrian Belew and The Lounge Lizards’ David Tronzo. As of this writing, a long-awaited Bandcamp re-release of the album was only days away. 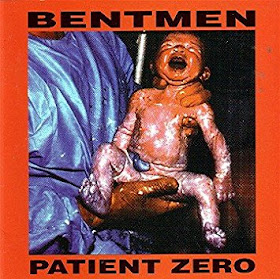 For Coleman, performing live with The Bentmen later this week is the continuation of a journey with Desmond and Co. that began all the way back in 1990. At that time, he was hired to video record a Bentmen show at Axis in Boston. A former child actor with opera singer parents, he was instantly blown away by the theatrics that greeted him at the other end of the camera.

“That whole thing was just pushing all my buttons!”

About a decade later, a ringing telephone changed his life forever.

“Des called me up and said, ‘Listen, we’ve got this gig coming up, and two of the drummers are out of town. We never play with less than two drummers. I’ve never heard you play, but I understand you’re pretty good. Would you be interested in coming down and sitting in on the gig?’”

Ten days later, he performed with The Bentmen in front of 40,000 people at the Central Square World’s Fair in Cambridge.

Aside from an abbreviated set at the Brighton Music Hall in 2014 as part of WMBR’s “Pipeline! At 25: 50 Years of Boston Rock” festival, little has been seen or heard from the Bentmen until now – which makes the upcoming ONCE Ballroom show truly special.

“The Bentmen work on their own strange atomic clock,” Coleman says. “We do things when the mulch is aligned with the light of the moon in just the right way, and then we start to grow out of the pumpkin patch and sprout!”

So what can audience members expect from Friday’s extravaganza? Even Coleman’s not entirely sure.

“I’m reminded of one of my favorite quotes by Leonard Bernstein: ‘Greatest requires two things: A plan and not quite enough time.’ That’s usually how we find ourselves. We have a plan, and I try to create structures or at least boxes to put things – there are a lot of moving parts to this show – but the best plan never survives the first encounter with the enemy. You do your best.”

Fans are encouraged to arrive early in time to catch the opening set from CMB, which features Desmond’s daughters, Casey and Mary Lee.

“Isn’t that cool? It’s amazing!” shares proud dad Des. “Casey’s had a really incredible run herself; she’s written so many songs. My younger daughter, Mary, is joining her, She’s a talented songwriter as well, and she plays multiple instruments like Casey. This is the very first time that the girls are opening for their parents’ band.”

An accomplished solo artist, Casey was first encouraged to have a go at being an onstage performer through the supportive words of Bentmen collaborator Tiny Tim.

Yes, you read that right; TINY TIM played with The Bentmen and inspired Casey’s career. Here’s the CliffsNotes version of her father’s sprawling tale of this pivotal event:

Des goes out to buy Katherine a Mother’s Day gift.
Des stops at a yard sale.
Des spots a canoe.
Des buys the canoe for Katherine.
Des discovers that the guy holding the yard sale is Victor "Moulty" Moulton, the famed hook-handed drummer from The Barbarians.
Des and Moulty become friends.
Moulty invites Des to his show at a VFW hall. Ernie Valens – Ritchie Valens’ cousin – is also on the bill. So is Tiny Tim.
Des meets Ernie, Tiny and the real-life inspiration for Ritchie Valens’ “Donna.”
Des invites Tiny to appear at a Bentmen show.
Tiny says yes.
The show happens. Rumors of mass audience-member LSD consumption abound.
The show is a success.
Tiny and a very young Casey meet in the dressing room and sing “Tiptoe Through The Tulips” together.
Tiny is impressed.
Tiny tells Casey: “Casey, you have a wonderful voice! You should take up songwriting and music.”
Casey dutifully follows her new friend’s advice.
Fin.

Fast-forward to the here and now, and Des and his family – as well as his extended family of musicians and inventive souls – are gearing up for an evening like no other. While The Bentmen’s future is unwritten, Friday’s show is sure to be a blast.

“I don’t know if I can do it much more,” Desmond admits. “I keep saying this is my last one, but then I get the addiction. When you have a good show and there are people into it, it’s an addiction to keep performing and not just give up something that you’ve created and put your heart into. But you are chasing ghosts; you never quite reach that pinnacle of feeling that you may have gotten one or two times, but those one or two times keep you at it.”

A special GoFundMe “Bentmen Slush Fund” has been set up to help the band cover the costs of the upcoming performance. Details - including information on some unsurprisingly bonkers perks - can be found in the video below: