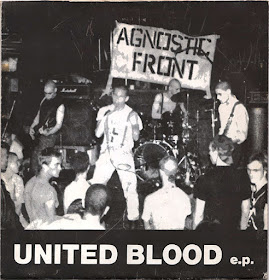 (Author’s Note: Due to scheduling, I was only able to catch Agnostic Front’s full set at the Black N’ Blue Bowl. I strongly encourage you go here to find out who else played that weekend and give those bands your support.)

This past weekend was quite possibly the most important two days in the history of New York Hardcore.

On Saturday, the Glenn Danzig-fronted version of legendary NJ/NY horror punks The Misfits played the Garden State for the first time in 35 years (review here). In addition to long-running West Coast Hardcore/Metal crossover giants Suicidal Tendencies, the ’Fits brought in NYHC veterans Murphy’s Law and Harley “Cro-Mags” Flanagan to add to the festivities. It was a smart move, as both acts were on the ground floor of the scene that sprouted from places like A7 and CBGB’s at the same time the original Misfits were hand-folding seven inch sleeves and writing songs at Danzig’s house a few miles away in Lodi, NJ. Murphy’s Law and Flanagan’s bands The Stimulators and the Cro-Mags were critical to the formation of the Northeast underground music scene, and the Misfits show at the Prudential Center would not have been as memorable as it was without their inclusion. The night proved that NYHC – a genre created decades ago by outcasts to reflect the reality of their surroundings – had not only survived, but thrived to the point of becoming a global phenomenon. After years of abuse by crooked record labels and promoters, public outcries against it from TV reports and talk shows, members losing their lives to crime and addiction and the gentrification of the culture that helped define it, the scene had won.

But the celebration wasn’t over yet.

On Sunday, Agnostic Front headlined the second day of the annual Black N’ Blue Bowl (held this year at the Brooklyn Bazaar) for a special set commemorating the 35th anniversary of their debut EP, United Blood. A record as raw and grimy as the city and era that spawned it, United Blood offered 10 songs (in less than seven minutes) that set the foundation for a band that is still going strong today – with founding guitarist Vinnie Stigma and long-serving singer Roger Miret (who’s appeared on every official AF release) still in tow. United Blood also has the distinction of featuring future Warzone singer Raybeez – who passed away in 1997 – on drums. To make the show even more special, the band pressed up a limited number of United Blood records that were personally sold by Miret at the band’s merch table.

True to the evening’s nostalgic vibe, the band’s set was comprised of United Blood and 1984’s Victim In Pain in their entirety (plus an explosive show-closing cover of Iron Cross’ “Crucified”). While nothing will replace the fire of their original versions, the United Blood songs benefitted from the musically precise power of the band’s current lineup (which is completed by 18-year AF veteran Mike Gallo on bass, former Leeway/Both Worlds drummer Pokey Mo and Slapshot guitarist Craig Silverman.) Every second the band was on stage was intense, with circle pits and group singalongs at every turn. (Vinnie and Roger are no longer young men, but you wouldn’t know it by the passion and enthusiasm they brought to each song – even those tunes that lasted less than a minute.) The highlight of the set came when Roger coaxed original AF singer John Watson on stage to provide backing vocals on a few tracks.

As a drummer, Raybeez was an incredible frontman. That said, his spastic and primitive beating on the original United Blood recording added to the EP’s overall crazed vibe – and presents an interesting challenge to a solid timekeeper who actually knows what he’s doing. Fortunately, Pokey Mo had the chops necessary to turn the maelstrom into solid punches that added an elevated musicality to the proceedings (especially on “No One Rules” – see below).

Capping off an unforgettable weekend, Agnostic Front’s time on the Brooklyn Bazaar stage proved that the New York Hardcore scene is as real and inspiring as ever. Vinnie and Roger were there at the beginning, and they’re far they’re finished. Trends come and go, but this band’s music and integrity are timeless.

A personal note:  Back when I was a long-haired 13-year-old nerd (as opposed to the bald 40-year-old nerd I am now), I went to my first Agnostic Front show. Roger was standing at the band’s merch table, so I went up to talk to him. He gave me the time of day and answered all of my young fanboy questions. He was present in the moment, engaging and - very important to an awkward kid like myself - respectful. Later in the evening, he walked over to me, said, “Thanks again for coming to the show,” and handed me a free t-shirt. I highly doubt he remembers that event, but I certainly will never forget it. It had a huge impact on me and introduced me to the spirit of inclusiveness and community that define Hardcore and the other forms of underground music that I’ve been involved in ever since. Fast-forward nearly 30 years to Sunday’s show, and Roger’s right there behind the merch table, meeting people, giving them his time and thanking them for their support. He was also courteous and giving in that way when I interviewed him back in 2007. That’s what it means to be the real thing.