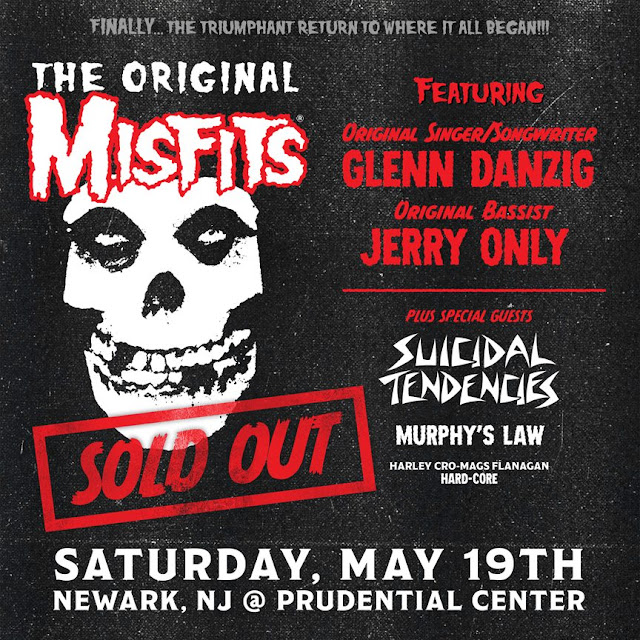 This was the show that mattered.

For their fifth reunion show since reconvening in 2016, “The Original Misfits” (a.k.a. singer Glenn Danzig and bassist Jerry Only with long-serving guitarist Doyle Wolfgang von Frankenstein, second six-stringer Acey Slade and legendary drummer Dave Lombardo) finally touched down in their original home state of New Jersey for a sold-out show at Newark’s Prudential Center. Considering that most of the band’s classic material was written in a Lodi, NJ home about 14 miles from the venue, anticipation for the Danzig-fronted incarnation’s first local show in 35 years was incredibly high. Fans poured out cash for high-priced tickets and merch, while more than a few of them also made the critical pilgrimage to Lodi Pizza to take in some relevant local history. This was a big fucking deal, and the inclusion of openers Suicidal Tendencies, Murphy’s Law and Harley “Cro-Mags” Flanagan made the whole thing even sweeter.

Compared to the band’s previous performance at the Forum in Los Angeles (reviewed here), The Misfits’ time in the Garden State was a less cohesive affair. “London Dungeon” was the evening’s bona fide train wreck, with Doyle often playing his guitar parts a good 10 seconds ahead of his bandmates (after Danzig came in late with the vocals). While the onstage feedback was not as prominent as it was at the Forum show, the gaps between songs were even longer this time around. (It must also be said that Danzig’s voice was clearly strained for a good chunk of the set.) But when the band hit the target, they were bulletproof: Doyle’s guitar work on “Where Eagles Dare” was the most intense thing this writer’s even seen the guy produce, and the crowd singalong during a vicious and victorious “Skulls” made every hardship the band endured over the last 41 years absolutely worth it. Lombardo, whose playing was noticeably more subdued than his fill-heavy theatrics at the Forum, kept the beats simple and strong. It was also nice to hear a solid version of “All Hell Breaks Loose,” which had limped off the tracks at the LA show after Danzig flubbed a verse.

Of course, none of the show’s sonic shortcomings meant a fucking thing. The Misfits were never about perfection (as the continued reverence for the forever-awesome Evilive - one of the most dogshit-sounding and-performed live recordings in history – clearly demonstrates). This show was about three irreplaceable performers and personalities putting their differences aside and getting on with their horror business in the place where it all began.

(The day after the show, word spread that Danzig’s mother passed away just hours before the gig. The guy still hitting the stage for what already had to be a high-pressure gig was one of the most Punk Rock things anyone has ever done. Respect and condolences.)

Although California’s Suicidal Tendencies are quickly approaching the 40-year mark in their career, the band’s high-energy set showed no signs of age and was by far the evening’s tightest. Bouncing between old-school gems like 1983’s “I Shot The Devii” and late  ’80s/early ’90s crossover tunes like “War Inside My Head” and “You Can’t Bring Me Down,” singer Mike Muir and company provided the perfect atmosphere to get the audience – who sported just as many Thrash/Metal band shirts as they did Crimson Ghost-emblazoned apparel – ready for the main event. Respect must be given to outrageously talented fill-in drummer Brandon Pertzborn, who sat in for regular ST timekeeper Lombardo. The guy’s been absolutely killing it in recent years (with a growing list of acts including “reunion”- era Black Flag, ho99o9 and Doyle’s solo band), and his precise playing for Suicidal was another exciting chapter in what is sure to be a long and successful career.

Murphy’s Law have always been New York Hardcore’s party band, so it was no shock that singer Jimmy Gestapo and crew brought a spirit of mischief to the stage. Naturally, the band’s set featured extended breaks that saw Gestapo goof around with the crowd (which included a little kid who was brought up on stage for the festivities). When the guys actually got around to playing music, they were completely on point, with the pro-pot anthem “Quest For Herb” being particularly, well, blazing. Few bands from the typically stone-faced New York scene could succeed in doing what Murphy’s Law have done for decades now, and their good-humored set was a reminder that Hardcore is as much about fun as it is about fury.

Considering that the entire show was a celebration of underground music’s glorious past, there was no way to do this thing right without having Harley Flanagan on the bill. Of everyone who hit the stage at the Prudential Center, Harley’s been in this game the longest – first as a little kid hanging out at CBGB’s before those letters meant anything to anyone and later as the young drummer for first-generation NY punks The Stimulators. Of course, he made his greatest mark in NYC and the world as the leader of the classic-era Cro-Mags, whose groundbreaking music was prominently featured in his blistering (if frustratingly brief) opening set. Already sonically intense on record, Cro-Mags staples like “We Gotta Know” and “World Peace” absolutely soared in an arena setting, a feat helped along by Danzig/Samhain mainstay Steve Zing’s guest turn behind the soundboard. Full marks go to drummer Gary “G-Man” Sullivan, who effortlessly matched the fire of ’80s-era Cro-Mags drummers Mackie Jayson and Petey Hines with impressive ease. (Sullivan’s live performance on “Death Camps” off 1989’s Best Wishes most intensely captured his gifts behind the kit). While the Cro-Mags continue to be a source of controversy due to their notorious in-fighting and fluctuating lineups, Harley made it clear that he still excels at what’s truly important – delivering the goods with music that could crack ribs all the way in the nosebleeds.

While it is true that the evening delivered four hours of unforgettable music, it offered an even greater meaning to those who remember seeing these bands when the phrase “back in the day” meant running the risk of getting knifed on the way to a show. Every act on this stage built something for themselves by doing it their way, and none of them were embraced by the mainstream in their early years. These groups formed during a time when it was excruciatingly difficult and often downright dangerous to be a Punk or Hardcore band. Now, they’ve sold out a frigging arena. Seeing all of these guys – and the surviving members of their original crowd – have this experience was a magical thing. Every single person who stepped on that stage Saturday night was right all along.

More on The Misfits:

My Life with The Misfits