On a very special edition of the Glory Is Noise online radio show, host Joel Gausten welcomes his wife, canine behaviorist Shannon Gausten, and Ministry frontman Al Jourgensen for an in-depth discussion on the importance of dog rescue. The hour-long episode, which also features music from Ministry's upcoming album Relapse as well as Jourgensen's recently-released Buck Satan & The 666 Shooters album Bikers Welcome! Ladies Drink Free, is available for free and on-demand at http://www.radiofreesatan.com/blog/glory-is-noise-episode-26-dog-rescue-edition-w-al-jourgensen/.


Dog rescue is a long-running concern for Jourgensen, who in December of last year released a limited-edition, hand-numbered “Buck Santa Xmas Bundle” in support of Rockstar Rescue (www.rockstarrescueaz.org). A limited edition of 365, the bundle includes a three-song CD (signed by Jourgensen), a Ministry Xmas koozie, a Ministry Eco Shopping Bag, a Buck Satan guitar pick and other goodies. With each sale of a bundle, $7 is donated to Rockstar Rescue, who need that amount of money per dog, per day. So with each bundle, Ministry fans are supporting one dog for one day. Once all the bundles are sold, one dog will be supported for an entire year. Additionally, Al and Angie Jourgensen will do matching funds to whatever monies are raised by Ministry fans – meaning that two dogs will be supported for one year! More information on the bundle is available at http://www.thirteenthplanetshop.com/2011-buck-santa-bundle-limited-edition/.

In addition to her work as a canine specialist, Shannon Gausten is a lifelong advocate of dog rescue organizations and currently oversees the operations of the dog park in her hometown of Concord, NH.

Glory Is Noise is a show on listener-supported Radio Free Satan (http://www.radiofreesatan.com). Each episode, host Joel Gausten offers an eclectic mix of music and exclusive interviews with mainstream and underground recording artists. The show’s Official Facebook Page is at http://www.facebook.com/pages/Glory-is-Noise-Radio-Show/117651034954730?ref=ts. 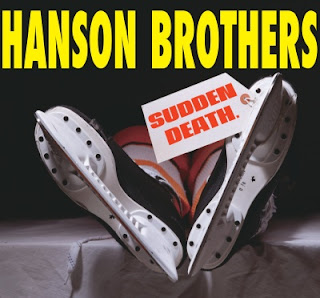 Appropriately named after characters in the legendary 1977 hockey flick, Slap Shot, The Hanson Brothers skated onto the scene from Canada in 1992 with their first album, Gross Misconduct. A blatant (and rather proficient) musical tribute to The Ramones with an unsurprisingly-high lyrical focus on the game that inspired their moniker, the band (originally launched as the alter egos of longtime Canadian cult heroes NoMeansNo) offered cheeky “puck” rock served up with cover art that mimicked The Ramones’ Road To Ruin.
Listeners who stuck around past the initial joke soon discovered that there were actual songs underneath the hijinks – and damn good ones at that. In fact, Gross Misconduct was one of the best Punk albums released in the ’90s. (Just take a listen to “No Emotion” and “A Night Without You.”) One has to wonder what would have become of The Hanson Brothers had they been based in Berkeley, CA instead of Victoria, Canada. After all, their music easily rivaled – and often exceeded - the likes of Screeching Weasel and the rest of the Lookout! Records clan. Too bad their work has been lost to history – until now.

Originally released in 1996 (and re-released by Southern Records in 2012), the band’s sophomore release, Sudden Death, keeps the better-with-each-listen joke going with 15 more hokey hockey hits. Highlights include “We’re Brewing,” "I Never Will Forget Her” and, ahem, “Hockey Song.”

While nothing on this album will change the world of music as we know it – or come close to matching the band that it shamelessly emulates – Sudden Death remains a satisfying dose of goofy mid ’90s Punk that still sounds great all these years later.