“One might factually say that Chronic Town was the sound of an expedition, ready for anything, setting forth.” – Mitch Easter

In late 1981 (or, depending on whom you ask, early 1982 – more on that later), four young men from Athens, Georgia calling themselves R.E.M. entered Drive-In Studio – a garage in Winston-Salem, North Carolina that had been converted into a modest recording facility – to put down tracks for their debut EP a short time after causing a local stir with an indie single called “Radio Free Europe”/“Sitting Still.” When released in the summer of 1982 on I.R.S. Records, the five-song 12-inch record/cassette Chronic Town signaled the true arrival of what would eventually become the first Alternative Rock band to break in America and beyond.
Four decades later, this pivotal release has been given a much-deserved second life for its 40th anniversary. 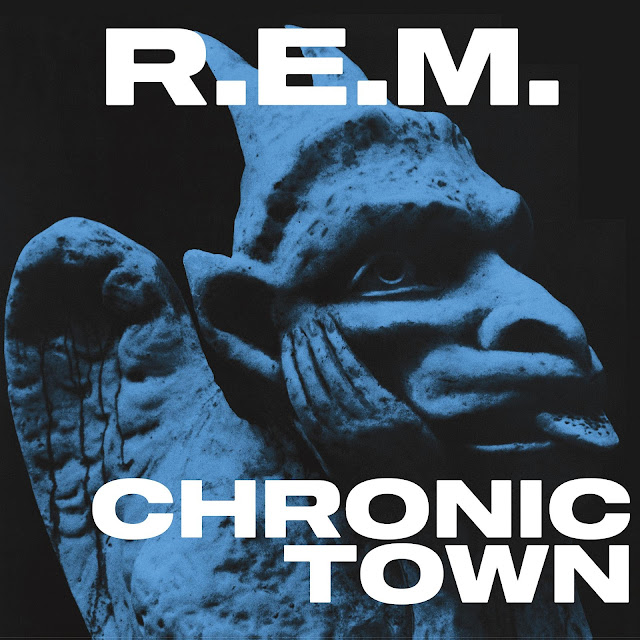 Last August, Chronic Town was finally released as a stand-alone CD (as well as issued as a 12-inch picture disc and a reissued cassette – along with a now-sold-out Chronic Town-branded cassette player) after previously appearing as part of the awesome 1987 odds-and-sods collection Dead Letter Office and the UK boxset The Originals (1995).
And it’s still utterly gorgeous after all these years.
Produced by the band and Mitch Easter of Let’s Active, Chronic Town proves that all the ingredients that would eventually turn R.E.M. into one of the biggest groups on the planet were already intact at the beginning of its 31-year career. Simply put, every note in these five tunes is a stunner. Guitarist Peter Buck’s signature sound was already fully formed and in full force in the opening notes of “Wolves, Lower,” while Michael Stipe’s trademark unintelligible vocals – perhaps the most intriguing element of the band’s 1980s run – function more as instrumentation than as clear messaging. Naturally, Bill Berry’s drumming is flawless (and beautifully recorded – especially by 1982 indie standards), while bassist Mike Mills – R.E.M.’s secret weapon – was already making his indelible mark on the group’s sound through his colorful musicianship and characteristically strong backing vocals. (Although Mills is always the reserved Southern gentleman in interviews, I’ve always sensed that he was the biggest rocker of the bunch.) The new 40th Anniversary Edition of Chronic Town features extensive liner notes by Easter, whose wordy (but by no means pretentious) prose provide the kind of in-depth gearhead speak that only a producer can offer. (“Others can write the socio-cultural analyses, but when I buy a record I want to know about the guitars and the studio,” he shares.) Curiously, his essay also introduces a conflicting viewpoint to the official narrative of the Chronic Town era. Thrice in his liner notes, he cites January 1982 as the start date of the Chronic Town sessions despite the fact that the original pressing’s sleeve – as well as the promo sticker attached to the 2022 edition – claim that the EP was recorded in October 1981. It’s an inconsistency that should have been clarified before this new edition hit the manufacturing plant. Considering Eater’s concise, almost academic approach to chronicling the sessions in the EP’s new packaging, I’m apt to embrace his version of events.
At its best, R.E.M’s music was simultaneously dark and uplifting – the kind of sound that young social outcasts (like yours truly) could find solace in by turning the radio dial to the left during the Reagan era. (As Easter so eloquently states in his liner notes, “You could rock out at a show with the people or listen in your bedroom and feel like only you or they were in the same secret world.”) With a boatload of memorable hooks and a splash of sexual ambiguity from Stipe thrown in for good measure, R.E.M. delivered the perfect sonic respite for this pubescent loner back in the day. (And I certainly wasn’t the only one.) The band was "alternative" long before that word became a marketing buzzword; consequently, it spent nearly 10 painstaking years building a loyal audience in a music industry that was slow to fully embrace four awkward-looking guys from Athens who largely sounded like a caffeinated version of The Byrds. (For perspective, consider that the group delivered the forlorn “Fall On Me” the same year Bon Jovi released “You Give Love A Bad Name.” Guess which single sold more.)
Of course, R.E.M. would eventually make it to arenas in the decade that followed, but I mostly checked out on the band by then. To my ears, there’s a world of difference between “Orange Crush” off 1988’s excellent Green, and, say, that goofy and overplayed 1992 song about Andy Kaufmann that I couldn’t stand then and can’t stand now. This is not typical hipster “I liked them better when nobody else did” sour grapes; the simple fact is that R.E.M. lost its edge when its music went right of the dial, and the raw spirit that fueled its first handful of releases was never truly recaptured. (To be fair, I have all the time in the world for “Low” and “Texarkana” off 1991’s mega-selling Out Of Time – as well as the majority of 1996’s underrated New Adventures in Hi-Fi – but I still found most of R.E.M.’s other post-breakthrough output to be an absolute bore.)
Despite the ebbs and flows that came after it, Chronic Town still holds up. It’s the sound of a new band growing into its own sound – a short document marking the beginning an exciting new era of American music. It’s primitive and perfect at the same time.
As Easter says in the liner notes, “It’s deep, and it’s fun. Everybody’s contribution is distinctive, and nobody ever sounded like them.” 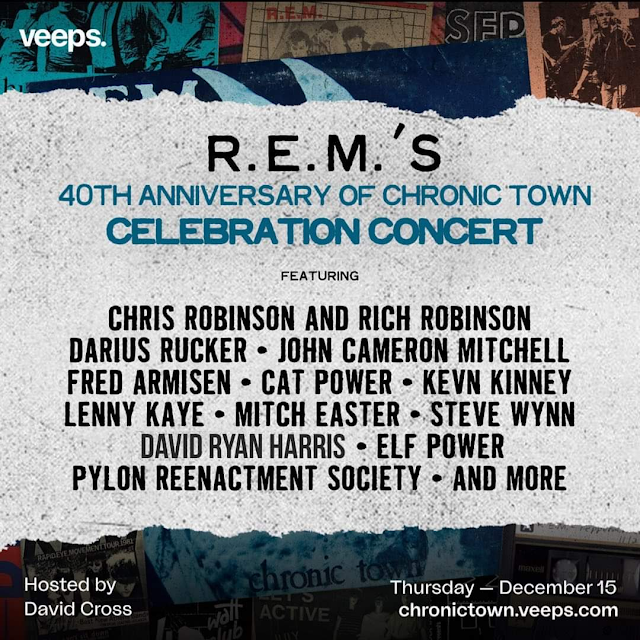 The reissue of Chronic Town is worthy of massive celebration, and we’re about to get two. On December 14 and 15, all-star concerts paying tribute to the EP will take place at the 40 Watt Club in Athens and the Coca-Cola Roxy in Atlanta, respectively. Artists scheduled to appear include Easter, Darius Rucker, John Cameron Mitchell, Fred Armisen, Kevn Kinney, Lenny Kaye, Steve Wynn, David Ryan Harris, Elf Power, Pylon Reenactment Society, Screaming Trees’ Barrett Martin, Gang of Four’s Hugo Burnham and more. Both events, which will be emceed by comedian David Cross, will benefit Planned Parenthood. Although both are already sold out, a livestream of the Atlanta show is available for preorder.
Purchase the 40th Anniversary Edition of Chronic Town
R.E.M. HQ
JOEL GAUSTEN ON FACEBOOK 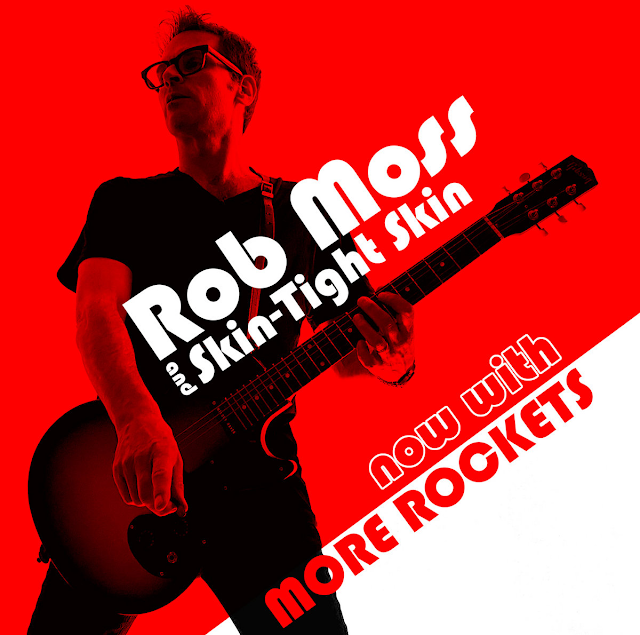 Currently based in Massachusetts, musician/songwriter Rob Moss is the Rip Van Winkle of American Hardcore.

As ground floor as you could be possibly be in the Washington, D.C. underground music scene in the early ’80s, Moss provided backing vocals (including the “moooo!” in the intro to the track “Cowboy Fashion”) on Government Issue’s 1981 Legless Bull EP – the fourth-ever release on Dischord Records. As a bassist, he cut his teeth in the bands Assault & Battery and Artificial Peace before joining Government Issue for its 1983 summer tour. (For an ear-melting example of Moss-era GI, check out the recording of the band’s July ’83 gig at CBGB on the Government Issue Live Bootleg Series Bandcamp page.)
And then… nothing. For a long, long time.
It would more than 35 years before Moss returned to music after devoting decades to educational, career and family pursuits. When he finally resurfaced, it was to serve as the singer and guitarist for his own project, Rob Moss and Skin-Tight Skin. His surprise reappearance yielded 2020’s appropriately titled We’ve Come Back To Rock ‘n’ Roll, a 14-song album that boasted 14 different lead guitarists and featured guest spots by musicians from Generation X, Government Issue, Wilco, Velvet Monkeys, Dinosaur Jr, Scream, Foo Fighters, Tav Falco's Panther Burns, Fear, The Four Horsemen, Willie Alexander and the Boom Boom Band, Smash Fashion, D.C. cult legends The Slickee Boys and many others.
Bolstered by a much beefier production than its predecessor (and also helped along by Moss’ overall stronger vocal and musical performances), the recently released Now With More Rockets finds the resurrected rocker joined by another who’s who of guest lead guitarists ranging from Fu Manchu’s Bob Balch to Greg Strzempka of the criminally underrated Raging Slab. Vocally, Moss falls somewhere between Lou Reed and Shriekback’s Barry Andrews with shades of Camper Van Beethoven’s David Lowery thrown in for good measure. Musically, the album is an eclectic mix of sounds that runs the gamut from Roots Rock (“Rip Van Winkle ’85,” the fantastic “Ink Blue Smoke”) to something that resembles a mashup of The Pixies and Girls Against Boys but somehow smooths out and streamlines both bands’ esoteric approaches without sacrificing any of their sonic quirkiness (“A Rocket Ship To You,” “I’m On A Rocket Ship [Heading My Way Back Home]”).
If you’re looking for a loud and fast Hardcore album based on Moss’ exploits in decades past, then Now With More Rockets isn’t for you. But if you admire the spirit of artistic evolution that is so characteristic of the city that spawned the man’s initial run (think Embrace and Rites of Spring over Minor Threat or Deadline), then this record will make perfect sense to your ears. Let’s hope Moss keeps going and we don’t have to wait until 2057 for his next one.
Now With More Rockets is available at Bandcamp.
JOEL GAUSTEN ON FACEBOOK