From Grief to Glory: Bill Ward Conquers His Demons Through Art

“When all you have is gone/It’s time to carry on.”
- Bill Ward, “Tall Stories”
Copyright 1990 Aston Cross Music

When legendary Black Sabbath drummer Bill Ward wrote the above words for his 1990 solo album Ward One: Along The Way, he exposed the heart of a man who had spent most of the previous decade battling – and eventually defeating – drug and alcohol addiction. During one particularly devastating point on his road to recovery, Ward – a man who scaled the heights of fame in the 1970s as one of the fathers of Heavy Metal – was reduced to panhandling for change in Huntington Beach. As anyone who has heard it knows, Ward One: Along The Way was Ward’s rise from the ashes, a breathtaking musical document born of pain, struggle, hope and the will to survive. But nearly a quarter century after the album’s release, Ward found himself facing a new kind of darkness.

On November 11, 2011, Ward joined the other three founding members of Black Sabbath at a special press conference to announce the recording of a new album – the original lineup’s first since 1978 – and a world tour. Fast-forward six months, and Ward was out of the picture amidst public claims that he was presented with an “unsignable contract” to participate in the latest reunion. Black Sabbath soldiered on without him, releasing the album 13 in June 2013 and currently charging through an American tour as this feature hits the Web. But as the rest of Black Sabbath went on with their plans, Ward was preparing to reveal perhaps his most personal and profound artistic statement to date, Absence of Corners, on August 1.

Boasting 15 fine art pieces and billed as “a collection of rhythm on canvas,” Absence of Corners was created by Ward in collaboration with the Los Angeles-based visual art team SceneFour. As described on the project’s extensive (and aesthetically amazing) website (www.billwarddrumart.com), Ward “utilized a sophisticated formula to create the collection’s visuals, using an array of drumsticks and rhythmic accessories that produce light, much like a painter utilizing brushes and oils. The movements featured within the captured rhythms are then studied and developed into abstract artwork that showcases a dimension not normally seen by the human eye.” Each numbered piece in the collection comes signed by the man himself.

“[The project began] as a request for me basically to show up on a nighttime session with a full kit of drums,” recalls Ward. “As a matter of fact, I played on the same kit that I was rehearsing on – which would have been the kit, had things worked out, that I would have taken to Lollapalooza and Download last year, so I actually played on a Sabbath kit.

“It started out as me thinking, ‘Okay, I’m going to show up and play drums, and somebody is going to take pictures of me and let me know if they need anything special or different or what have you,’” he continues. “I didn’t know that there was more, but it turned out there was quite a lot more. The entire project now has become far more than I had originally realized was going on, in a lot of different ways. It’s been quite an adventure, and a very good one.”

Ward was greeted at the session by “a number of people doing lots of strange things,” including handing him lighted brushes and drumsticks to use. Then, he was asked to play drums in the dark while surrounded by photographers.

“It was quite different to be completely in the dark playing,” he reveals. “All I remember was that there were different flashes of light. Different lighting was placed in and around my drum kit. At one point, there was someone with a ladder above my head, and someone on a ladder to the left of me, and the same thing to the right of me and down below…so many different angles.”

Ward ended up playing for 90 straight minutes in that darkened room, unleashing some considerable pent-up emotions in the process.

“We started out by having a PA set up, which was just putting out the music that I normally play to,” Ward explains. “After about six or seven songs, it was decided not to do that any longer. I was asked to just got ahead and start playing just to play. I said, ‘Do you mind if I just kind of go at it a little bit?’ They went, ‘No, just go at it. Do whatever you want to do.’ That’s exactly what I did. I didn’t know why I wanted to go at it; it just felt like the right thing to do. I kicked the shit out of the drum kit! Something was inside, and I just needed to completely get everything out…It’s as if that night, I had something to prove. I’m sure I was upset; I’m sure I was angry.”


(Click the player below to hear Bill talk more about the emotional aspects of Absence of Corners):

Following a second drum session with SceneFour a couple of weeks later, Ward was presented with the results of his efforts and tasked with naming each piece. Some pieces (like the sinister “Hello, I Don’t Think We've Met [Yet]”) clearly show the demons exorcized by Ward during the session, while others, such as the somber “Grief,” display a more subtle intensity.

“When I first saw the picture, I had no idea what it was,” remarks Ward on the piece.  “I looked and I thought that I saw a face – and in fact there is a face on it. It’s so distinctive, it’s uncanny. When I saw it, all it felt like to me was grief.”

Not surprisingly, the experience of creating Absence of Corners has greatly informed Ward’s other creative pursuits.

“If anything, it’s allowed me to know that I can diversify,” he offers. “I’ve taken some time out to work on this, but at the same time I don’t think I’ve dropped a stitch at all with what I’m trying to with [song]writing. I’m waiting to go into the studios to finish mixing Accountable Beasts, which is [my] new [solo] album. While I’m waiting, I’m writing something else for further down the line. It’s given me a feeling that I know I can diversify and pay my attention to something, and come back and settle back down into my writings – which tells me I’m a lot more relaxed about myself. I’m very loose about everything, and that’s not such a bad thing. I got tightened up last year on a lot of things I was feeling, but I’m allowing myself to relax and just enjoy the ride.”

(Click the player below to hear Bill talk about the response he's received to his art):

When Ward is asked where he’d like to be in a year’s time, his mind goes straight to his first love.

“I’d like to be playing more drums in a band,” he says. “If it could be Black Sabbath, wonderful. But if it isn’t Black Sabbath, I do have something else in mind where I can still get to play drums. As much as I love writing and everything, I miss being out on the road. I miss playing live and I miss traveling. As much as I like everything else I’m doing, it would be very nice to be there in a year’s time, being busy on a stage somewhere.”

(Click the player  below to listen to Bill talk about his art piece, "This  Evening," which can be viewed at www.billwarddrumart.com):

Just as Ward triumphed over tremendous personal obstacles to complete Ward One: Along The Way all those years ago, he worked through considerable inner turmoil to create Absence of Corners. Looking over the pieces that resulted from this process, he cites “We Focus. We Persevere.” as the one that currently gives him the most strength – especially when it comes to drumming.


(Click the player below to hear Bill talk about his art piece, "We Focus. We Persevere."):

While Absence of Corners and the in-progress Accountable Beasts album certainly bring Ward happiness these days, his greatest joy will undoubtedly come this January when he celebrates 30 years of sobriety. No matter what happens to him down the line in the always unpredictable – and often political – world of Rock ‘N’ Roll, Ward has already won.

“I’m really enjoying most of the days that come my way,” he says. “It’s been a long time since I was in Hell.”

To view all the pieces in Absence of Corners (and to request pricing), visit www.billwarddrumart.com. Additional information on Bill Ward is available at www.billward.com.

Bill Ward is also featured in the book From Satan To Sabbath: The METAL Interviews 2000-2009 by Joel Gausten, available HERE. 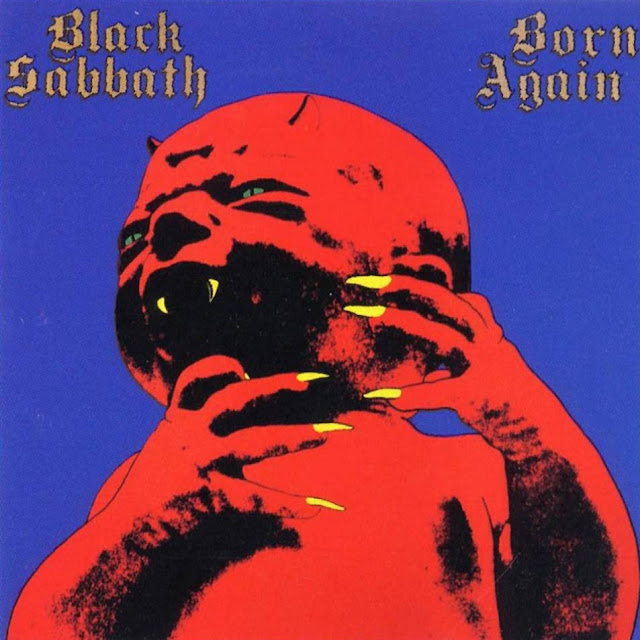 In honor of the 30th anniversary of BLACK SABBATH's Born Again album, here's audio of a chat that Bill Ward and I had about it back in 2011 on the Glory Is Noise radio show, around the time of the album's re-release as a two-CD deluxe edition: