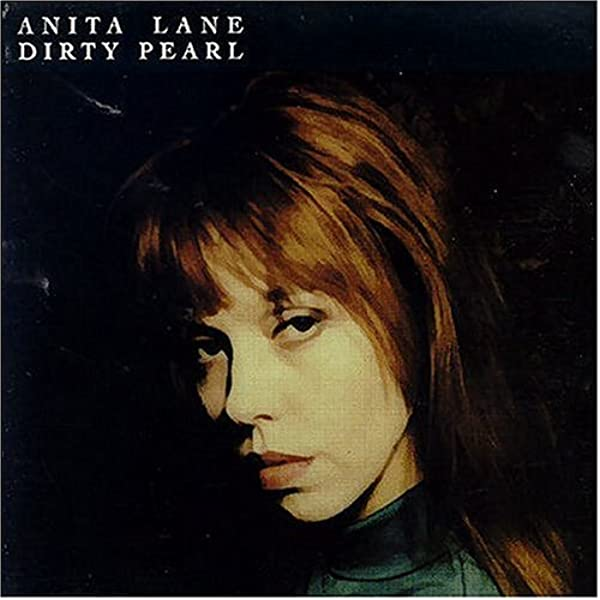 My morning was greeted by the very sad news that Anita Lane had passed away.

Most people have no idea who Anita Lane was. To a select few, she is best known as Nick Cave’s former muse and the woman who co-wrote his song “From Her To Eternity.” That alone should tell you plenty about her. She was also the haunting babygirl voice on Einstürzende Neubauten’s “Blume.” Perhaps most significantly, she wrote the lyrics to Nick Cave and the Bad Seeds’ “Stranger Than Kindness” – a still-stunning marriage between the sordid and the serene.
Although she was obscure, she also gifted us with a small but extraordinary personal discography that’s worth seeking out. Just be prepared for a ride that would make Marianne Faithfull and Nico blush.
It’s no surprise that Anita was nicknamed “Dirty” and her absolutely essential 1993 album was called Dirty Pearl. Watch her video for "Jesus Almost Got Me,” a song that effortlessly eclipses “WAP” and other considerably more blatant mainstream expressions of female sexuality with a delivery that rarely rises above a whisper. Her music was the soundtrack to the feminine side of film noir, the workings of a sonic witch whose image and output suggested she would have been fantastic company for late-night sinning before leaving her companion dizzy and disheveled in a hotel room and wondering what the hell happened.
Earlier this year, The Quietus published a lengthy feature on Anita’s work. Such a piece was long-overdue.
Of course, no new quotes from Anita were featured in the story, nor had she been truly visible in the media even at the height of her creative output. She remained an enigma, a shadowy songstress represented on Facebook through a fan page with few revelations about her life and the real-world circumstances and processes that may have driven the world she showcased in her music.
Anita’s passing comes at a time when there was finally a hint of more to come. Her most recent solo album, 2001’s Sex O’ Clock, is set for a first-ever vinyl release on Mute Records later this year. There was newfound interest in her past and even word of new music. In a way, it’s poetic that she’d leave us now in spite of this – still largely a mystery, still leaving us with little to go on than a handful of utterly perfect songs to break our hearts and challenge our imaginations.
Like most true artists, Anita created work that didn’t speak to everyone, but it will forever slay the right people at the right time – and leave them desperately wanting more insight into a story that will never be fully told.
Well played, dear. Farewell and thank you.
JOEL GAUSTEN ON FACEBOOK 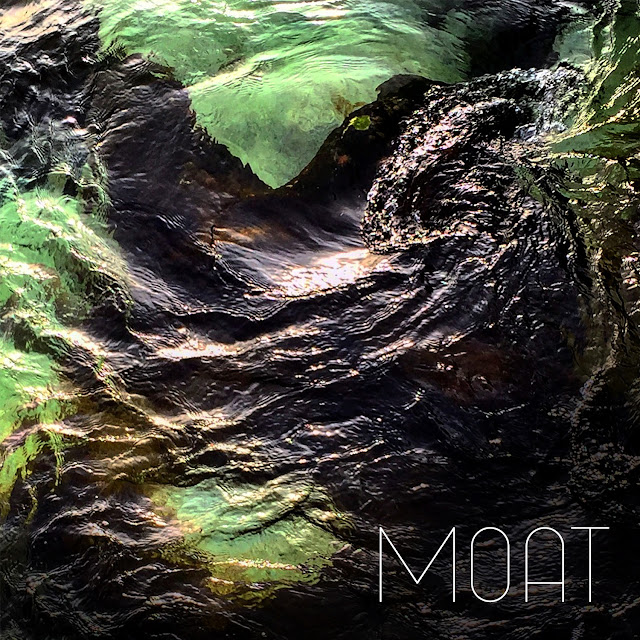 Sipping a cup of black coffee alone in a diner at 3am while dialing a cell phone that never picks up. Spending a downcast afternoon walking through a tired carnival with creaky and rusty rides that were surely something in their time. Facing another sunrise with a full ashtray and an empty bottle of wine. Staring at pictures of the one who got away – or the one in the other room who’s packing up to leave. There are moments in everyone’s life when they are confronted with the reality of a promise that never quite worked out. And now, those moments have a perfect soundtrack.

Wryly released two days before Valentine’s Day, Poison Stream, the first album in seven years from MOAT – a collaboration between Marty Willson-Piper (formerly of The Church) and Niko Röhlcke of Weeping Willows – is the kind of album that breaks your heart right out of the gate. From the morose opening keys to Willson-Piper’s concluding croon of the song’s title, the album's late-2020 single, “Gone By Noon,” was a decidedly somber affair that hinted at what was to come. While Willson-Piper’s past work with The Church often hid lyrical gloom behind shimmering arrangements (1988’s “Reptile” is a prime example), there were no grey shades – neither musically nor lyrically – found on this tune. The sense of loss and disillusionment was direct and palpable:
Silence spills like a wave in the dark
The films you play
Black and white
A final scene – crying
And you’re gone.
If that kind of sonic snapshot of disconnection is up your street, you’ll find more of the same on the album-opening “Acid Rain,” which uses a more upbeat musical presentation to cushion another Willson-Piper waltz through lyrical melancholia:
You flick the pages
Of your book
Trying to find
The right line
Then there it is
That famous quote
That explains
Away your life
You flip a coin
You laugh out loud
As it’s lost.
However, “Acid Rain” is far from a complete downer, as the song’s arrangement (highlighted by the simple but highly effective charge of drummer Eddie John) flavors its sentiments with hooks that last for days. Synth player Torbjörn Svedberg and backing vocalist Dare Mason add just the right amount of light to the proceedings, while Willson-Piper’s guitar work is instantly recognizable and characteristically pristine.
Then comes “Helpless You” – the best song Tom Waits never wrote. I mean, this is the opening verse:
The light slips through
You're alone in your room
With your secrets and pain
And it's happening again.
If you hang on long enough, you’ll encounter a gorgeously composed chorus that will compel you to sing along despite what it’s telling you:
And you cry as you slide away
In the light see the sign of your decay
So goodbye, we'll deny your prey
Your desires and lusts have locked you away
So sad, helpless you.
Once you pick yourself off the floor after that, you’ll be greeted by seven more songs pretty much in the same spirit as the preceding three. But even when reaching their dirgiest depths, the songs are rescued from complete despair by stunning (and sometimes even uplifting) instrumentation by a cast of other supporting characters, including (among many others) Willson-Piper’s wife, Olivia, whose harmony vocals and violin/cellolin on “The Ballad of Sweet Marie” add just enough sweetness to flavor the otherwise bleak narrative. The addition of tenor sax and trumpet (courtesy of Jonas Wall and Jonas Lindeborg, respectively) on “The Roadmap to My Soul” delivers a similar effect. Multi-instrumentalist Röhlcke – the album’s not-so-secret weapon – is heard and felt all over the place as the proceedings play on.
Of the remaining album tracks, “The Folly” is the peak of Poison Stream’s gripping power, with the strings of Malin-My Wall and Madelene Johansson meeting Röhlcke’s classical guitar in just the right way to expertly carry Willson-Piper’s crestfallen delivery.
And how do Willson-Piper, Röhlck and company wrap up this 10-song affair for the dutiful listener? With a song called “Tears Will Come.” For fuck’s sake!
Quips aside, Poison Stream is a truly masterful work – easily one of Willson-Piper’s most captivating releases and proof that his union with Röhlcke is a deeply successful formula. Every syllable the man sings utterly shatters you in the best possible way, but what do you expect from a guy who wrote the lyrics for this thing while spending time in the Swedish countryside?
Poison Stream will not speak to everyone, but nakedly honest art never does. However, those who possess the requisite disposition and bent to take it on will be rewarded with an album both serene and soul-crushing. It’s ultimately quite beautiful, even if it’s possibly the first recording since Nick Cave and the Bad Seeds’ Skeleton Tree to warrant the need for a safeword.
Devastation and cynicism have rarely sounded so lovely.
Order Poison Stream
More on MOAT on this website
More on Marty Willson-Piper on this website
MOAT on Facebook
JOEL GAUSTEN ON FACEBOOK 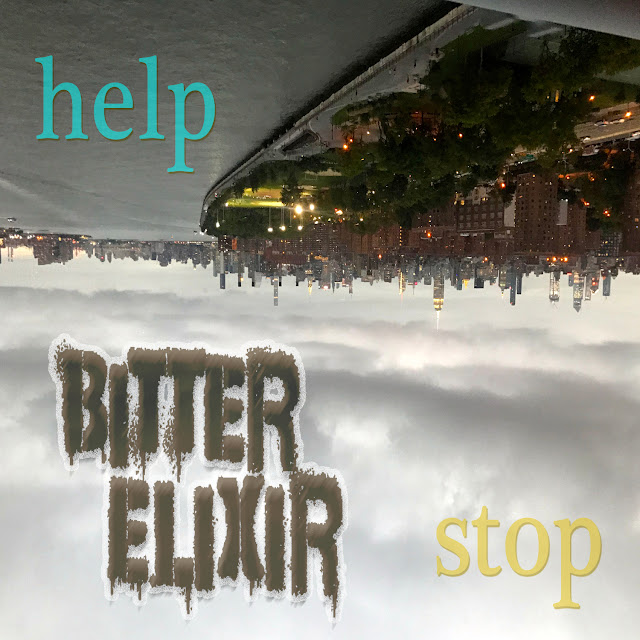 Nothing about Bitter Elixir – the newly unveiled collaboration between Chicago-based multi-instrumentalist Roger Ebner and veteran New York underground noise merchant Christoph Liggio (a.k.a. Krztoff) – should work.
Ebner is a soft-spoken, sixtysomething sonic traveler whose musical journey has included explorations in (among many other things) Jazz and World music. Liggio is best known as the leader of long-running Industrial Metal savages BILE. This is clearly an odd pairing, but it’s one that makes all the sense in the world when considering that these two disparate characters first met as participants in the “25th Anniversary” incarnation of Pigface in 2016.
The spirit of Pigface’s aural alchemy is all over Bitter Elixir’s debut single, “Help”/”Stop,” out today via Bandcamp. “Help” reinvents the classic Beatles track as a dystopian dirge accented by plenty of vocal effects (which thankfully don’t overshadow Liggio’s surprisingly soulful voice) and sax blasts. Bitter Elixir’s reimagining is equally dreamy and dreary – a perfect reflection of what Ebner and Liggio call “the sense of urgency and uncertainty of ‘the new normal.’”
The mostly instrumental “Stop” is the Skinny Puppy-meets-John Zorn jam you never knew you needed until now. While the heaviness of Liggio’s contribution is expected, those unfamiliar with Ebner’s more abrasive tendencies will certainly be brought up to speed once his pummeling shrieks come in. (If wild sax playing is your thing, be sure to track down Bluewolf Bloodwork, Ebner’s exceptional 2008 album with the brilliant avant-garde collective Snarling Adjective Convention.)
Perhaps the most magical thing about the Pigface experience is that it allows musicians who wouldn’t otherwise meet to subsequently branch off and create captivating sounds of their own. Bitter Elixir is not the first example of this phenomenon (nor will it be the last), but it is certainly one of the best.