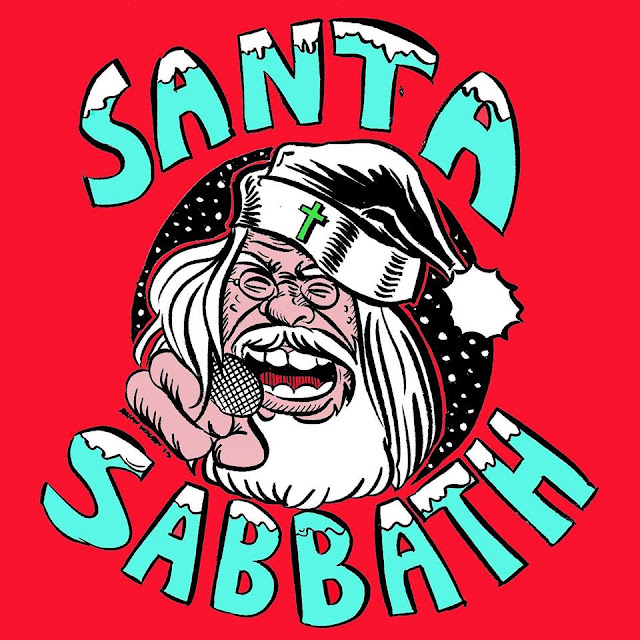 As you can figure out by its moniker, Santa Sabbath is a holiday-themed Black Sabbath cover band. The Los Angeles-based group is comprised of singer Bob Lee (The Freeks, The Amadans, Clawhammer, Mike Watt), guitarist Jonathan Hall (Backbiter, The Freeks, Angry Samoans, Motorcycle Black Madonnas), bassist Pat Hoed (The Black Widows, Brujeria, Down By Law) and drummer John Collinson (Legal Weapon, Leather Hyman, Motorcycle Black Madonnas, The Golden Rulers). Boasting Lee's powerful Ozzyesque vocals, the group is currently funding the release of a six-song CD through Kickstarter. The release is slated to feature cover art by legendary artist and photographer Edward Colver and include the tracks “Santa Sabbath,” “Sled In The Sky,” “Electric Hanukkah,” “Children of the Sleigh,” “Frosty The Snowman” (done to the music of “Paranoid”) and “Sweet Tree.”

While it is tempting to simply dismiss Santa Sabbath as a silly gag, doing so would rob you of some genuinely great music. I've heard several reinterpretations of/tributes to the mighty Sabbath over the years (the awesome Brownout Presents Brown Sabbath instantly comes to mind), but Santa Sabbath is without question the very best one that's hit my ears. Yes, the lyrics are obviously corny and the holiday theme gets a bit tired after repeated listenings, but you'd have a hard time finding a stronger, more respectful representation of Sabbath's classic music than what Santa Sabbath put down on this EP.

I had the pleasure of hearing a pre-mastered version of this EP last September when I was visiting Ed Colver in LA and he asked John to swing by and play it for me. I was instantly floored by every second of it, but I was especially blown away by John's drumming, which beautifully recreates Bill Ward's often-intricate percussion with jaw-dropping skill.

The Santa Sabbath Kickstarter ends in a couple of days, so check it out and contribute to making this amazing recording a reality. Ho Ho Ho!