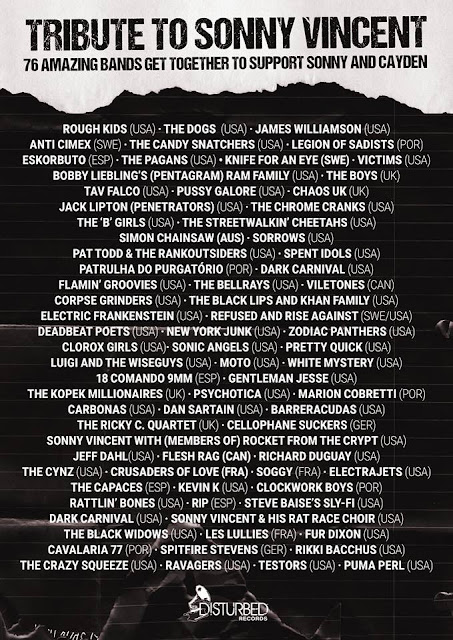 I’ve played on nearly 50 releases in my lifetime, but this just-released 3-CD collection is the one that’s most important to me.

On January 3, 2016, Sonny Vincent’s son, daughter-in-law and grandson were injured in a gas explosion/fire. When Sonny arrived in North Carolina to see them, they were all on life support. The hours, days, months and years that followed saw regular surgeries, rehabs and struggles for these members of Sonny’s beloved family. He put his music career on hold to help his loved ones through these difficulties and take care of his grandson, Cayden, full time. The recovery for all involved has been slow and painful – both physically and mentally.

A few months ago, Sonny asked me if I would be interested in contributing a track to a benefit release. While my answer was immediate and positive, I didn’t have any new material ready in the tank that I could give him. What I did have was an awesome song I recorded with Electric Frankenstein in the ’90s called “Welcome To My Town” that had been out of print for nearly 20 years (and only currently available on an album that sells for $300-plus on Amazon. Yikes!) I figured if people were willing to shell out that kind of dough to hear it, then they’d likely pay a helluva lot less to have it and help out a great cause at the same time. After getting the blessing from Dan from EF to move forward, I hit up my buddy Dave Ingram (Benediction/Bolt Thrower/a million other bands) to help me get the 20-plus year-old song into a proper file format for a 2019 release, and off it went to Sonny.

Now, it’s part of a three-CD, 70-plus band release that exists to help one of our own and those closest to him. There’s a ton of incredible artists on this thing – James Williamson from The Stooges, The Pagans (miss you, Mike), The BellRays, The Flamin’ Groovies, Pussy Galore, Bobby from Pentagram, The Dogs, Dark Carnival, The Chrome Cranks, Richard Duguay, Fur Dixon…Christ, the list just goes on and on! It’s an honor to be a part of something that makes the listener rock the ever-loving fuck out while offering hope to those who need it – which, of course, is exactly why we all do music in the first place.

Here’s how to order the compilation (which is also available in digital format):