A Beginner’s Guide to Twisted Roots


Twisted Roots was the brainchild of keyboardist Paul Roessler, a musical alchemist who had already built a sizable history with The Screamers, Nervous Gender, Geza X and The Mommymen, Nina Hagen and a slew of other acts by the time he started his own project in early 1981. In addition to providing a vehicle for his creative ideas, Twisted Roots gave Roessler (and, ultimately, the other members who later comprised the initial lineup) a way out of the grief he was experiencing over the recent death of close friend and Germs frontman, Darby Crash.
“There was a lot of healing involved, because Darby was a friend of all of ours,” recalls Roessler, who soon set out to recruit former Germs guitarist Pat Smear for the new band.
“Pat was really depressed and shook up about [Darby’s death],” he says. “It seemed like he was shutting down and not playing with anybody. I didn't think he'd want to do it, but I gave him a call and he was interested.”
Before long, Roessler and Smear recruited friend Maggie Ehrig to sing, a skater kid named Emil McKown to play drums and Roessler’s sister, Kira, to play bass.
“It was a small scene; we all knew each other,” Roessler says. “Maggie had never sung in a band before. She had a great look and a great personality, and I just wanted to see what would happen.”
A self-described “angry teenager,” Ehrig first began kicking around LA’s underground music scene in 1978.
“I hated the rules society was enforcing,” Ehrig recalls. “I decided I wanted nothing to do with being ‘civilized.’ I started making my own clothes - dying them, chopping them up…I would cut off the leg from a bellbottom pant and wear it as a super-tight mini skirt. At night, I would listen to an AM transistor radio under my covers because my record player had been taken away for playing Led Zeppelin’s new album over and over at full blast. One midnight in 1978, I heard The Sex Pistols being played on KROQ, and it totally got my attention. My ears wrapped themselves around that tiny radio and hung on for dear life. The music soothed me in a way…urged me …motivated me. The music and my anger were a perfect match.”
When not learning about new music via KROQ, Ehrig received an education on bands like X-Ray Spex, Roxy Music, The Weirdos, The Buzzcocks and other groups thanks to Hollywood High School friends Amy Albany and Kira Roessler.
“Kira was in Home Economics class with me and I sat down next to her,” Ehrig shares. “She would wear wildly-painted mens suit coats with safety pins, badges and a case of birth control pills on her lapel. She was in a band called The Monsters at the time. She and Amy were the only ‘punk rockers’ on the Hollywood High campus at that time. Kira showed me the Masque on Hollywood Blvd. I was in awe of the girls with REALLY SHORT hair who dressed like boys or really tomed-up gals. At that time, I also met the very sweet and talented Tomata Du Plenty [of The Screamers] on the Franklin Ave. bus. He lived right down the street from me at the time. Messy, spiky hair…torn-up t shirt, tight skinny pants. Back then, when you saw someone dressed interesting and/or different…they were interesting and different. Mind you, the fashion back then was beige bellbottoms and Laura Ashley dresses. Yuck! Tomata welcomed me in by acknowledging me and adding that he liked my pegged green pants tucked into my cowboy boots. I started to belong to a very special club that really became a movement. I chopped off my waist-length brown hair down to one inch long and dyed it black. At 17, I left home with the clothes on my back and three dollars in my pocket. I had nowhere to go, and I didn’t spend one night on the street. The music bound us together, and our visual expression told us apart. I found a tribe; the rest is history.” 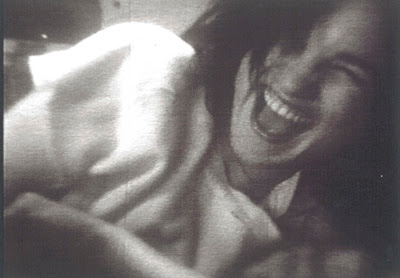 With its first lineup in place, Twisted Roots hit the ground running as a live act in the summer of 1981 – sounding absolutely nothing like you’d expect from a band comprised of ex Germs and Screamers members.
“A lot of the bands coming out at the time were really hardcore and angry, but we had been through a very dark and angry time and were struggling not to be part of that cliché,” Roessler says. “The reaction [from audiences] was mixed. I think people thought we were going to build on The Germs and The Screamers, which is a stupid idea because The Germs were perfect, and the Screamers were perfect. There's no point trying to improve upon perfection, and we had no inclination to do what we had already done…I think all of us took 'punk rock' as a license to experiment.”
Twisted Roots released a three-song 7” (“Mommy’s Always Busy In The Kitchen,” “Pretentiawhat” and “The Yellow One”) and also had a track (“Snaked”) on the Rodney On The Roq Vol. 2 album on Posh Boy Records before McKown split (later to play drums in Black Flag during 1982) and was replaced by Gary Jacoby. Shortly thereafter, the Roessler/Roessler/Smear/Ehrig incarnation of Twisted Roots ran out of stream.
“While the chemistry was incredibly creative and powerful, it was also incendiary and difficult to keep together," Roessler admits.
Kira later joined Black Flag, touring and recording with the band during their most productive period (1983-1985), while Jacoby later worked with Smear in The Death Folk. Jacoby would also gain notoriety in the late '80s/early '90s as a member of the criminally-overlooked LA band Celebrity Skin, whose 2003-ish reunion show at the Roxy in LA remains one of the most surreal visuals this writer has ever witnessed.
Roessler kept the Twisted Roots name going for the better part of the ’80s, enlisting an impressive array of musicians ranging from The Weirdos’ Dix Denny to Black Flag’s Dez Cadena to keep the spirit alive. But it just wasn’t the same.
As Ehrig says, “The original [lineup] was the best, and always will be.”
The classic version of Twisted Roots finally appeared on CD in 2004 thanks to Dionysus Records, who issued a self-titled, 12-song collection including the 7”, the Posh Boy track and previously-unreleased songs.
“I'm glad that when we reissued [the music on CD], we really put the initial band back as the band that deserves that name,” Roessler says. “That's not to say that a lot of the other things weren't cool, [but] I think the original band was larger than the sum of its parts.”
These days, Roessler maintains an active career as a producer, working with a number of acts including Josie Cotton, Nina Hagen and Elephant. On the musical front, he has been seen performing around Los Angeles with reformed Masque-era punks The Deadbeats as well as Fancy Space People with former Germs drummer Don Bolles. Most recently, he completed recording “The Arc,” a 47-minute piece he originally wrote in 1975. In addition to hosting intimate “listening parties” of the work at his Echo Park home for friends, Roessler has expressed interest in releasing “The Arc” commercially in the near future.
Twisted Roots re-entered the public eye in April 2011, when the original lineup (sans McKown, again replaced by Jacoby) reconvened for a live performance at a Los Angeles screening of Dave Travis’ film, A History Lesson: Part 1, which features footage of the 1984 lineup of the band alongside live clips of The Meat Puppets, The Minutemen and Redd Kross.

“I just did [the reunion show] for pure fun,” Ehrig says. “I am really thankful to Pat, Kira, Paul and Gary for participating in the fun. We all had a blast.”
“I just can't believe that even happened!” adds Roessler. “I don’t know if we'll do it again, but I have to say that when we walked off, Pat came up to me and said, 'When can we do it again?'”
This article is dedicated to the memory of Twisted Roots manager Rick Van Santen.