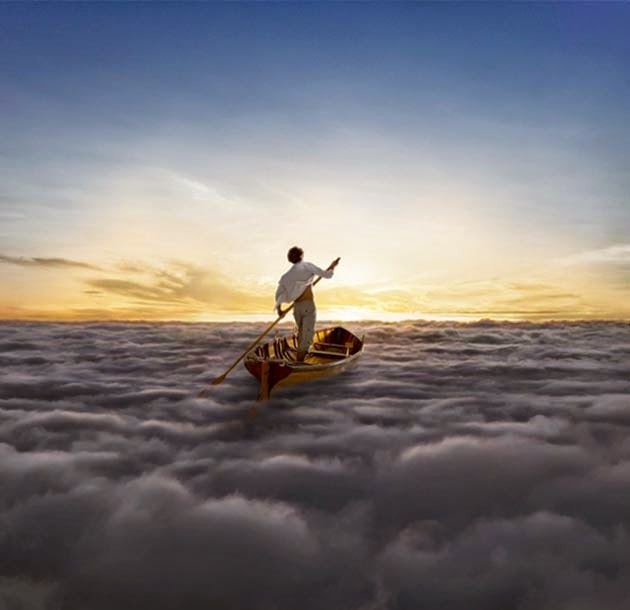 This review of Pink Floyd's The Endless River is being posted nearly a month after the album's release. While that's not exactly the sort of thing that record labels and publicists like to see, rest assured that the gap between the album's premiere and this piece was intentional. Simply put, I needed time to live this album before writing about it. A band with a nearly 50-year history unveiling their first new music in a generation is something that warrants a high level of contemplation. We're not talking about a random band shooting out a clump of tunes here; we're talking about the self-proclaimed “final” album by one of the most innovative and influential groups in music history. While the Web was immediately filled with knee-jerk reactions to the album once it hit retailers (with some reviews being especially vitriolic), it is important to note that this is a Pink Floyd album. One can't possibly “get” an entire album experience by this band in a single sitting. In an era of Mp3 instant gratification and the supposed death of the LP format, here comes Floyd to give us an album that we actually have to stop and listen to all the way through to understand and appreciate. The bastards!

Of course, the structure of The Endless River isn't the only thing about the album that makes us think of the past. Pink Floyd's previous album was released in 1994 – and a helluva lot has happened since then. Sadly, in the case of Pink Floyd, the decades that followed the release of '94's The Division Bell have seen the band face the painful truth of mortality. Syd Barrett, the band's original sonic genius whose much-chronicled mental health issues resulted in years of seclusion after his 1968 departure from the band, died in 2006. Two years later, fellow original member Richard Wright succumbed to cancer. And although Hell froze over long enough to see long-estranged bassist/vocalist Roger Waters rejoin his former cohorts for a brief performance at Live 8 in 2005, this fleeting reunion was never meant to last. Considering how cruel the hands of time have been to these men in the last two decades, a new Pink Floyd album was the last thing anyone expected to receive in 2014.

But here we are.

Before this review goes anywhere else, let's address what has quickly become the primary bone of contention among some fans and critics regarding this album. Yes, the foundation for The Endless River was built on hours of unused instrumental recordings from the Division Bell sessions. (The various photos from the 1993 sessions found in the hardback digibook edition serve to drive home this fact.) Yes, these mostly instrumental recordings were eventually whittled down to an album's worth of material with the help of a trio of producers (Andy Jackson, Roxy Music's Phil Manzanera, Killing Joke's Youth). Yes, some additional instrumentation and vocals were added to 20-year-old sounds to give the proceedings a more complete feel. Yes, the Pink Floyd left standing to finish The Endless River is one original member (drummer Nick Mason) and the man who replaced Syd Barrett (guitarist/singer David Gilmour). Are fans really supposed to accept this thing as a legitimate Pink Floyd album?

Yes. The Endless River is a true and deeply important addition to the Pink Floyd discography. And the reason for that comes down to one person: Richard Wright.

With The Endless River, Pink Floyd have finally – and gracefully– righted one of the greatest wrongs in their history. Completely absent from 1983's The Final Cut and reduced to sideman status after his return for 1987's Waters-less A Momentary Lapse Of Reason, Wright would finally regain his full standing in Pink Floyd for The Division Bell. With Wright's presence in the band fully restored by the time of his passing, it is appropriate that Gilmour and Mason chose to use material already featuring the man (including a piece recorded all the way back in 1968) instead of recording an entirely new album without him. By building The Endess River around Wright's invaluable contributions, the surviving duo have succeeding in confirming and celebrating the keyboardist's importance to the band's longstanding magic. After getting short shrift for much of his tenure, Wright is posthumously given the spotlight he so richly deserved. Simply put, anything new released under the Pink Floyd name without him would be a crime. (And as far as the complaints regarding Waters' absence from The Endless River are concerned, consider the fact that an entire generation of music fans – this writer included – were kids when Waters split. The first time many of us heard of Pink Floyd was when we saw the “Learning To Fly” video on MTV in 1987. We're used to Roger not being there. It's fine.)

While The Endless River is not the greatest Pink Floyd album ever released, it is certainly the most cohesive and adventurous collection of music they've produced since The Wall. Far from a mere collection of Division Bell castaways, the album offers an array of moments that meet or even far exceed the quality of that release. Presented as 18 tracks spread over four sides (which each side representing a complete piece), the album starts at a meditative place. Mellow album opener “Things Left Unsaid” conjures The Orb before flowing into “It's What We Do,” which introduces Gilmour’s trademark pristine soloing to the album. Side A closes with the soothing “Ebb And Flow.”

The adrenalin kicks in considerably on Side Two, which finds Mason showcasing a percussive fury more powerful than anything he delivered on The Division Bell. When the drummer lets loose on “Skins,” the tribal-flavored results are sensational. Without even reading the liner notes, you just know that this track involved Youth (who unsurprisingly receives a performance credit on the track for “effects”). The album's second piece closes with the urgent Wright composition “Unsung” and the soaring “Anisina,” a number made all the more beautiful thanks to Gilad Atzmon's tenor saxophone.

The Endless River loses it way a bit on Side Three – the piece on the album most glaringly derived from disparate musical fragments. While the content on this side is often fascinating (especially the Wright-penned “The Lost Art Of Conversation” and “Autumn '68”), it is also frustratingly brief. For example, “On Noodle Street” shows tremendous promise (highlighted by the sterling bass playing of longtime Floyd associate Guy Pratt) before disappearing after a mere 1:42. Naturally, the side's longest number,“Talkin' Hawkin'” (featuring a guest vocal turn by the legendary physicist and author himself) actually feels like a complete, coherent song – a feat accentuated by the soulful backing vocals by Youth's one-time Blue Pearl collaborator, Durka McBroom.

While Side Three is jumbled, Side Four is sublime. The uplifting “Calling” leads into the exceptional “Eyes To Pearls,” which finds a Nick Mason/Andy Jackson rhythm section delivering just the right amount of tension to add intriguing color. “Surfacing” is Gilmour's Endless River masterpiece, showcasing the same effortless grace that has defined his playing for decades. Pink Floyd wrap up The Endless River – and, presumably, their career – with “Louder Than Words,” which finds the album's sole lead vocals (sung by Gilmour, with lyrics by his wife Polly Samson) paying tribute to the band itself:

Inspired by an absent friend, The Endless River takes us on one final trip through the creative minds of a unique combination of players and songwriters that left an indelible mark on the world of music. If this is indeed the end, this album is an extraordinary way for Pink Floyd's light to go out.