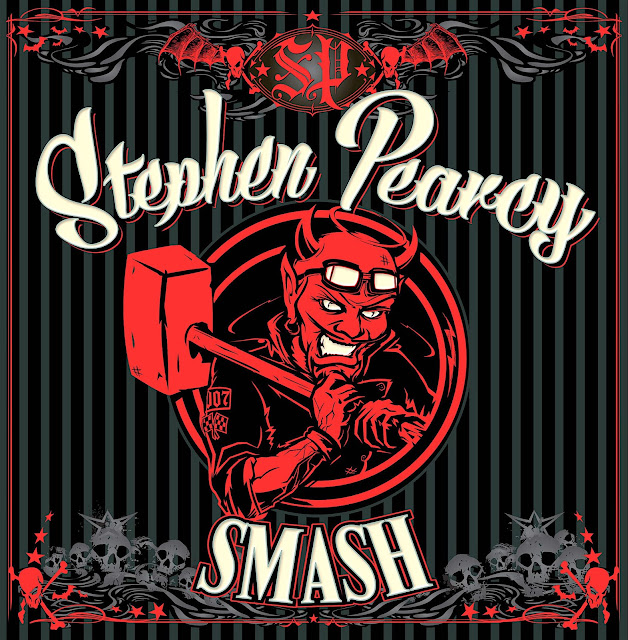 “Every now and then, you’ve got to step outside of the box to stay in the game.”

These wise words were spoken to me a few days ago by Ratt frontman Stephen Pearcy while he was discussing his new solo album, Smash. Out January 27 on Frontiers Music Srl, the 13-song release features some of the most varied and unexpected music of his career. While tunes like “Ten Miles Wide,” “Jamie” and “I Can’t Take It” boast the same vibe that characterized Ratt’s ’80s heyday, it’s left-field tracks like the brooding “I Know I’m Crazy,” the Folky “What Do Ya Think” and the intense ballad “Summer’s End” that give Smash its edge.

Two years in the making, Smash was recorded during breaks on the road and originally conceived as a series of EPs. After being approached by Frontiers, Pearcy jumped at the opportunity to turn the tracks into a full-length record.

“There are great songs that didn’t even make it on the record,” Pearcy says. “I still have one in the can with [legendary Ratt producer] Beau Hill, mixed and mastered.”

“There’s some heavy stuff in there. Consciously, and especially lyrically, I really wanted to touch on certain things. Open you eyes, look up at the skies and take a look around; it’s not all what it seems to be. There’s an underworld; there’s other stuff going on.”

This outlook comes through loud and clear on Smash’s best moment, “Passion Infinity,” a complex number that offers a considerably more cerebral take on the world than most Pearcy fans might expect.

“We’re being led around; nobody wants to talk about things and speak up,” says the singer on the song’s subject matter. “The arrangement’s just crazy; it’s just in your face... It was one of the later ones we got into. My guitar player brought me that music, and I wanted to really talk about something interesting.”

“I really didn’t want to [include the lyrics on Detonator], but [Frontiers] asked me to do it with this one, and I happily agreed and said, ‘Yeah, I think I need the lyrics in here. There’s too much going on here; I want people to kind of understand what’s happening.’”

The album’s musical strength is due in large part to guitarist Erik Ferentinos, who’s been Pearcy’s co-writer and right-hand man for the past 15 years.

Smash is an intriguing new adventure for a man whose life in the music business spans nearly four decades. Pearcy first gained attention as the leader of Mickey Ratt, which originally operated in San Diego for a handful of years before relocating to Los Angeles in 1980. In addition to Pearcy, Hager and Thorr, Mickey Ratt’s extensive list of fluctuating members included future Ozzy Osbourne/Badlands guitarist Jake E. Lee and late drummer David “Rock Vodka” Thum (Tex and the Horseheads/Funeral/The Celestials). By 1982, the band had shortened their name and morphed into a preliminary version of Ratt, later solidifying their “classic lineup” of Pearcy, guitarists Warren DeMartini and Robbin Crosby, bassist Juan Croucier and drummer Bobby Blotzer in 1983. The ensuing eight years saw Ratt sells millions of albums on the strength of MTV staples including “Back For More,” “Round And Round, “Wanted Man,” “Dance” and “Way Cool Jr.” At the end of ’91, Ratt experienced the first of many breakups. The next quarter-century saw the band reform numerous times, both with Pearcy (on 1999’s Ratt and 2010’s excellent Infestation) and without him. In addition to an ongoing solo career, Pearcy’s non-Ratt activities have included fronting the bands Arcade (with Fred Coury of Cinderella/Chastain/London), Vertex (with Al Pitrelli of Megadeth/Trans-Siberian Orchestra fame on guitar and the great Bob Daisley on guest bass) and Vicious Delite.

Shortly after Smash arrives in music stores and online platforms, fans will also be able to experience Pearcy’s latest return to Ratt. Currently based around the vocalist and fellow “classic-era” members DeMartini and Croucier with later-period Ratt guitarist Carlos Cavazo (ex-Quiet Riot), the band will be making their return to the stage on February 11 at the Treasure Island Resort Casino in Welch, MN. Pearcy says that a drummer for the rejuvenated band will be announced shortly.

Of course, fans have been seeing a completely different version of Ratt – led by classic-era drummer Bobby Blotzer and featuring a revolving door of members – hit stages across the country since the fall of 2015. The media hoopla and legal warfare between the two camps can fill a book, but the short version is that Pearcy and Co. are carrying on as Ratt and intend to record a new album in the not-too-distant future.

“The dust is settling; it’s pretty much settled. We’re moving forward as the real band – thank God – in every aspect…I don’t need to bad rap, bash or even dwell into it. We’re just letting the dust settle, and so be it. It is what it is now, it’s the real deal and we move ahead.”

The fact that Pearcy, DeMartini and Croucier have been able to regroup for yet another round of Ratt is a miracle considering their decades-long history of bust-ups and personality clashes. But at the end of the day, Pearcy believes that what this often combustible combination of musicians is able to produce together on stage and in the studio is still worth the craziness that has occurred between them throughout the years.

“[If] there’s one thing that keeps us coming back for more – no pun intended – it’s the music, but it has to be the right time and place. That’s why when somebody stepped out of bounds and went off running doing what they did, it was inappropriate…Ratt has been around a long time, so we tend to like to do things a little carefully these days [and] not just throw it out there and grab a buck, so to speak. There has to be some kind of reason for it. If we don’t do it collectively, then there’s no reason to do it. It has to be done right. Just going out there and doing it just to do it doesn’t really make sense. We know that people still want to hear it, but it has to be the right time. That’s why we took some hiatuses and regrouped. Fortunately, the three of us were able to see eye to eye on this and where we were going and what we wanted to do. That’s why we’re here again – the music.”

No matter where the latest Pearcy-fronted incarnation of Ratt ultimately ends up, he anticipates a comfortable and casual experience for all parties involved.

“It almost killed us [doing] the same thing for 10 years. That was the first sign of implosion for Ratt in ’91 – not giving ourselves the time to unwind, regroup and think. I’ve learned that if you’ve got to step outside of the box to get your ya-ya’s out, do it. It doesn’t mean we’re going anywhere because we take a break; it doesn’t mean it’s over. Although some people may go out there and try to preach that, it’s not the facts. The fact is we’re ready when we’re ready. We have that opportunity; we have that privilege. We’ve been doing this [so] long that we can actually say, ‘Hey, we’re not doing something for a couple of years.’ Is that cool? Well, it’s cool with us. (laughs) If it makes things better for us, it’s better for you when you get it the next time around.”

Smash and the Ratt reunion is not all that Pearcy aficionados can expect from the man in 2017. At the time of this writing, he was putting the finishing touches on the upcoming third volume in the Before & Laughter series of odds-and-ends compilations from various eras of his musical life. The collection will be released on Top Fuel Records, the indie label that Pearcy has run since 1995.

Thirty-four years since the formation of Ratt in Los Angeles and nearly four decades since the early days of Mickey Ratt in San Diego, Stephen Pearcy remains an enthusiastic songwriter and performer ready and willing to hit as many stages as he can.

“I still get excited to go out there and have a good time and see the smiling faces. I don’t go out there for adulation; I go out there to get off and get you off. As long as people want to keep hearing it, I’ll step up.”