Although Depp is best known as a world-class actor, the guy’s history as a musician dates back decades. Long before he became a king of the cinema, he was an early member of Rock City Angels, legit and brilliant (and, naturally, criminally underrated) Glam Metal almost-weres who had a sound that mixed the filthy swagger of Appetite For Destruction-era Guns N’ Roses with the pristine songwriting sensibilities of Hanoi Rocks. A few years and a few million dollars later, Depp joined forces with Butthole Surfers singer Gibby Haynes for P, a short-lived project that issued a one-and-done album (produced by Pigface/Butthole Surfers/Rollins Band bassist Andrew Weiss) in 1995. In more recent times, he has played alongside Alice Cooper and Aerosmith’s Joe Perry as a member of the supergroup Hollywood Vampires. More than just a famous actor indulging his inner rock star, Depp is actually the real deal who was writing and performing music long before he found fame on the big screen (and even on the small screen, as his stint with Rock City Angels roughly coincided with the early days of his eventual breakout role on the show 21 Jump Street).
Now, Depp is making music-related headlines via his collaboration with none other than Jeff fucking Beck. After first meeting six years ago, the duo quickly bonded over cars and music. Beck soon urged Depp to strap on a guitar and record some music with him. The result is 18, an album of covers (plus two original Depp compositions) recorded over the past three years and out July 15. The album’s track listing is as unexpected as the collaboration itself: Covers range from The Beach Boys (“Caroline, No”) and The Everly Brothers (“Let It Be Me”) to The Velvet Underground (“Venus In Furs”) and (get this!) Killing Joke (“The Death And Resurrection Show”).
“When Johnny and I started playing together, it really ignited our youthful spirit and creativity,” Beck says. “We would joke about how we felt 18 again, so that just became the album title, too.”
To drive the point home, the album cover – drawn and designed by Beck’s wife, Sandra – is an illustration of Beck and Depp as 18-year-olds.
Naturally, Depp is quick to express his enthusiasm over working with such a musical giant.
“It’s an extraordinary honor to play and write music with Jeff, one of the true greats and someone I am now privileged enough to call my brother.”
Beck wastes no time in returning the compliment.
“I haven’t had another creative partner like him for ages! He was a major force on this record. I just hope people will take him seriously as a musician, because it’s a hard thing for some people to accept that Johnny Depp can sing rock and roll.” 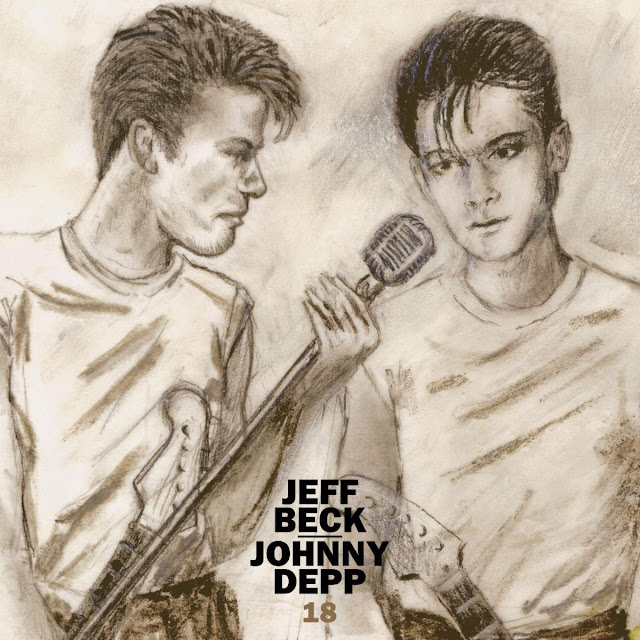 So…what does this record actually sound like? Well, based on the two advance tracks supplied to this writer, not bad at all. The pair’s rendition of “Venus In Furs” pays due respect to the primitive eeriness of the Velvets’ original while simultaneously restructuring it in more palatable terms for mass consumption. The track also features some of the most incendiary playing that Beck has put on disc in quite some time (especially once the tune hits the 3:16 mark). And while Depp is certainly no Lou Reed, his Gothy vocal delivery adds enough dark charm to make the whole thing work.
The album’s first single, the Depp-penned “This Is A Song For Miss Hedy Lamarr,” finds the former Edward Scissorhands channeling Hunky Dory-era David Bowie as he ruminates on the downside of fame. (As Depp forlornly sings in the song’s chorus: “I don’t believe humans anymore.”) While it’s not quite a Tom Waits-quality lyrical examination of a fallen lady, it’s still a fascinating listen that shines a worthy spotlight on a revolutionary actress whose life was utterly fascinating in and out of Hollywood. (Love having WiFi? Well, Hedy’s largely responsible for its very existence. Really. Look it up.)
The verdict so far? These two tracks are certainly good enough to pique my interest, and I look forward to hearing the rest of this album. Also, anything that gives due props to Hedy Lamarr and Killing Joke deserves an approving nod. (Despite being largely underwhelmed by the recent live video of Beck and Depp taking on the Killing Joke number, I’ll reserve my final judgment on the merits of this Herculean effort for when I hear the recorded version on 18. Godspeed, gentlemen.)
Johnny Depp has seen his fair share of controversy in recent years. If nothing else, 18 will give him (and his supporters) a welcome palate cleanser and an opportunity to simply rock – something the guy’s been doing for decades with or without the glare of the media’s spotlight.
Bring it on, Captain Jack.
Pre-Order 18
JEFF BECK AND JOHNNY DEPP: 18 – Track Listing:
1. Midnight Walker (Davy Spillane cover)
2. Death And Resurrection Show (Killing Joke cover)
3. Time (Dennis Wilson cover)
4. Sad Motherfuckin’ Parade (Johnny Depp original)
5. Don’t Talk (Put Your Head On My Shoulder) (Beach Boys cover)
6.This Is A Song For Miss Hedy Lamarr (Johnny Depp original)
7. Caroline, No (Beach Boys cover)
8. Ooo Baby Baby (The Miracles cover)
9. What’s Going On (Marvin Gaye cover)
10. Venus In Furs (The Velvet Underground cover)
11. Let It Be Me (The Everly Brothers cover)
12. Stars (Janis Ian cover)
13. Isolation (John Lennon cover)*
*Available on digital and CD version only
Jeff Beck
http://jeffbeck.com
https://www.facebook.com/jeffbeck
https://twitter.com/jeffbeckmusic
https://www.instagram.com/jeffbeckofficial
Johnny Depp
https://www.facebook.com/JohnnyDepp/
https://www.instagram.com/JohnnyDepp/
JOEL GAUSTEN ON FACEBOOK