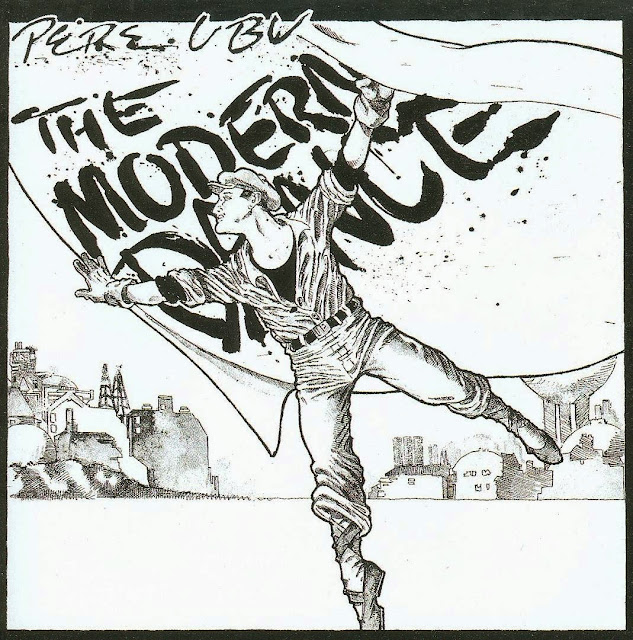 There is no other band quite like Pere Ubu.


The kind of musical group that forces scribes to beg the heavens for the right adjectives (I'll go with “brilliant”), Pere Ubu rose in the mid 1970s from the ashes of Cleveland pre-punks Rocket From The Tombs. Former Rocket singer David “Crocus Behemoth” Thomas and guitarist Peter Laughner were the engines behind Ubu's original incarnation; this lineup debuted with the still-bulletproof single “30 Seconds Over Tokyo” (a reworking of an earlier Rocket number) in December 1975. Thomas and Laughner were an intriguing sight to behold: Thomas' hefty frame made his high-pitched wails all the more shocking, while Laughner's reckless, substance-abusing escapades risked obscuring the ridiculously talented musician and writer within. As for the music of this early (and, dare I say, best) version of Ubu...well, you'll have to do some homework and form your own opinion. (Hint: The 1985 singles compilation Terminal Tower is a good place to start.)

Laughner's self-abuse led to his death in 1977. John Thompson, who has designed the majority of Pere Ubu's album covers since the very beginning, remembers Laughner's days working at Drome Records, the Cleveland music hub that Thompson once owned.

“My favorite memory of Peter was his arrival at a lame Cleveland Heights wine-and-cheese party, wearing a full length SS-style leather jacket, waving a bottle of Remy in one hand and a loaded Luger in the other. Really sent everyone in this polite get-together running for the exits,” he recalls. “Another was when he brought a shotgun to work, shredding all our phone books with it. And another was when a neighborhood lady was forcing her elementary school son to buy the Roots soundtrack when the kid really wanted to buy Kiss' Rock and Roll Over. She asked us to play the Roots LP in the store, and Peter did, but not before nearly giving her a heart attack when he whipped out a switchblade to open the shrinkwrap.”

Carrying on after Laughner's sad demise, Pere Ubu released their debut album, The Modern Dance, in 1978 and haven't looked back since. Those who take their rock with a dash of esoterica will certainly appreciate 1978's Dub Housing and 1982's Song Of The Bailing Man, while fans of more conventional (but no less exhilarating) forms of expression are encouraged to experience the many gems found on 1991's breathtaking Worlds In Collision.

No matter where on Pere Ubu's lengthy discography you happen to begin your journey, I guarantee you that you will be awed by David Thomas' voice - an instrument that will simultaneously take your breath away and leave you scratching your head. A few years ago, I asked Thomas,  the only member still in the band from the “30 Seconds” days, what drives him to keep creating Ubu music after nearly four decades.


"An overwhelming sense of failure and utter dread of public humiliation, basically,” he answered. “I don't think I've done anything right, so I don't want to quit until I get it right. I'm tired of the humiliation of not getting it right. That's what keeps me going. If I ever get it right, I'll quit that day."