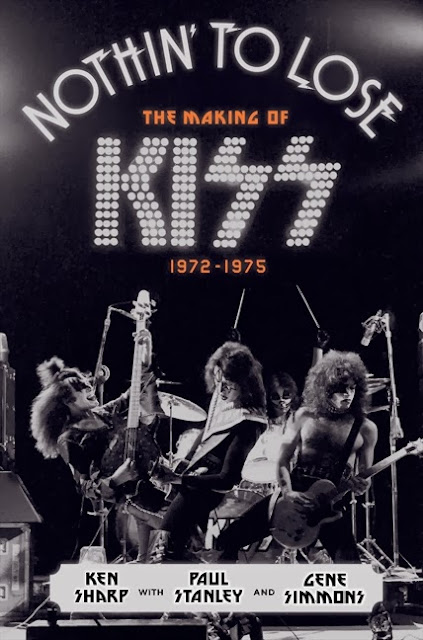 KISS always does it bigger, louder and with more intensity than everyone else, which of course means that Nothing To Lose: The Making Of KISS (1972-1975) (It Books) is as excessive as it is entertaining.
Compiled by Ken Sharp (co-author of 2003’s stellar KISS Behind The Mask: The Official Authorized Biography) with help from Paul Stanley and Gene Simmons, Nothing To Lose presents a 550-page (!) oral history of the first three years of KISS’ explosive run. From the very first meeting between Stanley and Simmons to the career-saving success of Alive!, no facet of the group’s formative years is left unexplored. The book’s many highlights include a look inside KISS’ strong friendship with early openers Rush (complete with an insane onstage pie fight between the bands at the conclusion of a tour), Casablanca Records’ tireless upstream efforts to get the band noticed by radio and Kiss/Hotter Than Hell producer Richie Wise’s admission that he failed to capture the band’s true sprit on the latter release – a transgression that contributed to the album’s initial poor sales and the band’s arduous climb to success. Additionally, the book features several acknowledgements of original KISS choreographer/creative consultant Sean Delaney’s impact on the group’s early image and stage presentation. Often overlooked in KISStorical presentations, Delaney (who died in 2003) gets an overdue spotlight in Nothing To Lose, even sharing the book’s dedication page with original KISS manager Bill Aucoin (1943-2010) and Casablanca Records founder/marketing genius Neil Bogart (1943-1982).
In addition to these departed allies, Nothing To Lose features memories from dozens (and dozens) of crew members, radio programmers, club employees, promoters, opening bands, famous fans, family members – you name it. In fact, the book’s list of contributors is so exhaustive that I half-expected the janitors at Cobo Hall to appear at any moment to share their experiences. This devotion to allowing so many background figures to take center stage makes Nothing To Lose not only a truly unique addition to the ever-growing library of KISS-related titles, but also a book that will appeal to the most hardcore of KISS fanatics.
If you are a casual fan looking for a view into every era of KISS’ celebrated career, stick with Behind The Mask. But if you’re a decorated member of the KISS Army who wants to know what everyone from a promoter in Canada to the girl who counted the money at a KISS club show in Long Island in 1973 thought of your heroes, Nothing To Lose is the book for you.
Go HERE to order your copy of Nothing To Lose: The Making Of KISS (1972-1975).