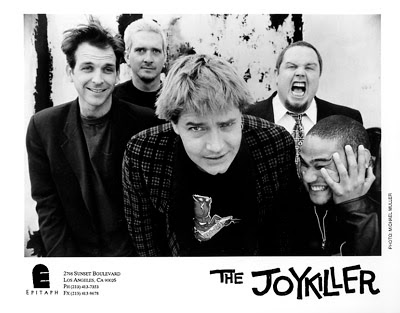 TSOL. Tender Fury. The Joykiller. Cathedral Of Tears. Some of the music made by these bands changed lives. All of this music featured the vocals of Mr. Jack Grisham.

Whether he's fronting the current incarnation of TSOL (boasting most of their original '80s lineup since 1999) or indulging in a variety of extracurricular projects both musical (including the extraordinary Songs For An Up Day by The Manic Low and last year's release of archival Vicious Circle recordings) and literary (including 2011's An American Demon: A Memoir), Grisham consistently delivers the goods. This is especially true of Grisham's involvement in what this writer believes are two absolutely flawless albums: TSOL's Beneath The Shadows and Tender Fury's If Anger Were Soul, I'd Be James Brown. Now, he is working to resurrect the recorded life of his mid '90s act, The Joykiller.

Signed to Epitaph Records, The Joykiller released three studio albums (The Joykiller, Static and Three) from 1995 to 1997 and a compilation called Ready Sexed Go! in 2003. As with everything else Grisham has done musically, The Joykiller presented an intriguing mix of street-level danger and undeniable Pop sensibilities. If you've never heard them, you need to make the investment in their albums. They were one hell of a band.

Recently, Grisham uncovered a number of forgotten Joykiller rehearsal tapes of unreleased material. Inspired by what he heard on them, he decided to get the band together again to record these tunes for a new album tentatively titled Music for Break-ups. The band currently has an Indiegogo campaign going until September 9 to raise funds to complete the project. Rewards include everything from test pressings to a turntable to use to play the album. To make the deal even cooler, the album will be produced by Paul Roessler, the man responsible for the best album of 2013.

There is no way Music for Break-ups is going to suck.


Go here to learn more about the project and donate money towards the album's creation.

UPDATE: Just received word from Paul Roessler that the great Rikk Agnew (Christian Death/Adolescents) will be contributing guitar to the recording. Amazing...