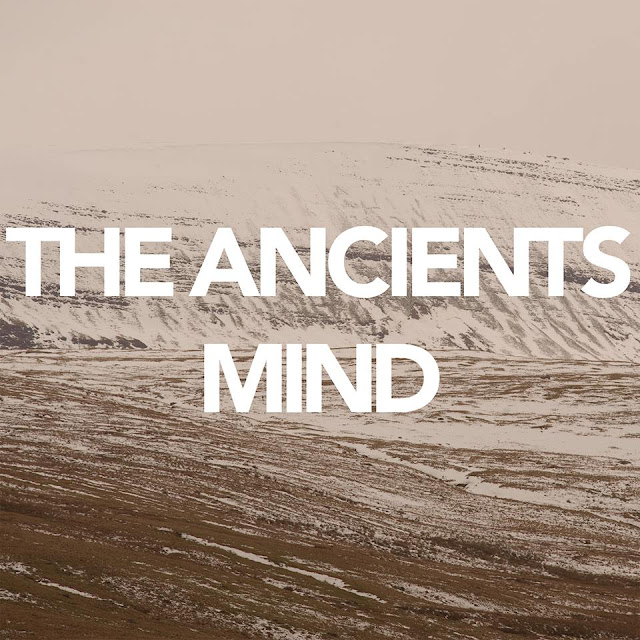 It's impossible to review Mind, the first release from The Ancients in nearly 25 years, without diving into how this album got here in the first place.

Anyone who was a part of (or – like yours truly at the time – too young to do more than just read about) the late '80s/very early '90s underground music scene in New York/New Jersey surely remembers what a glorious hodgepodge the whole thing was. Grab an old EC Rocker from the time period, and you'll see shots of poofy-haired Glam bands sharing space with Goth groups in the paper's “Banding Together” section, ads for Punk and Metal bands (or, as the case often was, Metal bands comprised of old Punks) sharing the stage at The Pipeline or Studio One... and sporadic mentions of a small number of bands that were starting to make some interesting noise way out in Seattle. It was a beautiful time when everything seemed to blend together, resulting in bands that looked like Sonic Temple-era Cult but sounded like The Sisters Of Mercy (or Hardcore Punk guys who suddenly started looking and sounding like Circus Of Power).

One of the more intriguing characters to come out of this era was Fred Schreck, whose strong, Peter Murphy-esque voice first won over listeners during his stint as leader of Shoot The Doctor, a criminally underrated New York band best remembered for their appearances on the TV talent show Star Search in 1990. (Videos of these impressive performances are available on YouTube courtesy of keyboardist John Foster.) Despite this national attention, Shoot The Doctor dissolved after failing to secure a record deal, leaving Schreck to forge ahead with a solo project called “The Ancients.” Championed by major fan Joey Ramone, The Ancients quickly built a strong reputation in New York City's Lower East Side. With assistance from NYC club impresario Rob Sacher (Sanctuary, The Mission, Luna Lounge), Schreck brought The Ancients to the studio, resulting in a brilliant 1991 eponymous CD. The record's greatest track, “Release Me,” stands alongside Peter Murphy's “Cuts You Up,” The Mission's “Deliverance” and The Sisters Of Mercy's “More” as one of the strongest songs of the time period.


Schreck's working relationship with Carruthers and Ferguson would grow in significance two years later, when the singer was invited by the two to front their East West Records-signed act, Crush, after the band (originally known as Pleasurehead and signed to Island Records) saw the departure of original singer Michael Bramon. With Schreck completely re-recording the lead vocals at the last minute with great aplomb, Crush (completed by exceptional Lloyd Cole/Cats On A Smooth Surface bassist John Micco) released their fantastic self-titled album in 1993 – and nothing happened. Despite being a solid release (and boasting a should-have-been-hit with “The Rain”), the album – and the band – swiftly fell victim to the weight of the Grunge era, leaving Crush to sit in various cutout bins ever since. (A hunt for the album is highly recommended, as tracks like “The Rain,” “Mary [Sing],” “She Came Down,” “Days Of Joy” and “We- The Love Child” are absolutely essential listens.)


Shortly after the release of Crush, Schreck found himself in the studio working on a second Ancients album with a new co-pilot. Initially involved with The Ancients when he mixed “Release Me” on the first album, British multi-instrumentalist and producer Morgan Visconti became a crucial part of The Ancients' second chapter, co-writing songs with Schreck and contributing keyboards, strings, backing vocals and drum programming. Others who contributed to the recordings included Ferguson, drummer John Socha, guitarist Chris Sokolewicz, backing vocalists Diva Gray and Robin Clark (best known for their work on David Bowie's Young Americans) and Schreck's former Shoot The Doctor bandmates Albert Zampino and Dave Tsien. Over the next four years, Schreck and Visconti worked to piece together the sessions into a full-length album.


And then... silence. By the time the 14 songs were completed, Schreck and Visconti found their personal and professional lives being pulled in different directions. For Schreck, this meant starting a new life in Nashville, where he raised a family and launched the popular Alternative Country group, The Billygoats, with old cohort Zampino. Visconti stayed in New York, building a career as a composer of ad music and releasing a solo album, Ride, in 2014.

With the duo splintering off into successful-but-separate lives, it appeared that The Ancients' lost second album would remain one of a long list of promising music projects that never left the ground. However, the surprise digital release of the collection, christened Mind, comes as the latest chapter in Schreck's unexpected second life in the Rock world. In 2012, Schreck resurfaced (at old friend Rob Sacher's suggestion) in familiar musical territory as a member of Satellite Paradiso, an all-star project helmed by former Psychedelic Furs guitarist John Ashton and featuring (among others) Sara Lee (Gang of Four/ The League of Gentlemen), Jonathan Donahue (Mercury Rev/The Flaming Lips), Cheetah Chrome (The Dead Boys/Rocket From The Tombs) and – interestingly enough – Big Paul Ferguson. With Satellite Paradiso's stellar 2014 debut album gaining well-earned attention, the timing was perfect for Schreck and Visconti to finally unleash Mind to the masses.

Not surprisingly, Mind boasts numerous highlights. As soon as an acoustic guitar kicks off album opener “Dope,” it is clear that Mind is an infinitely more organic affair than its drum machine-driven predecessor. (For those familiar with the first Ancients album, the groove found on the track “Rain” - not to be confused with the similarly titled Crush song - is indicative of what to expect on Mind.) Highlighted by Schreck's soaring vocals (comparable to his unforgettable highs on “The Promise” off the first album), “Dope” gives way to Big Paul's driving pulse on the mid-tempo “Things Fall Apart.” The irresistible “Circa 1977” mixes Low-era Bowie and “Fade To Grey”- era Visage with amazing results, while the chest-hitting drumming on “Shovel” finds timekeeper John Socha delivering a potent beat originally conceived by Ferguson in the Crush days. (Socha's performance on “Divine” is equally impressive).

“Wonder Element” is perhaps the track on Mind that most resembles the Crush days, with Schreck, Ferguson, Visconti and Tsien offering strong performances that could have easily found a comfortable place on the East West album. With Visconti putting down impressive drum programming, the stellar “Nowhere Bound” finds Schreck and Zampino joining forces to produce a driving Rock number reminiscent of The Mission's better moments. Anchored by Schreck's tasteful bass playing and Ferguson's solid groove, the gorgeous title track alone is enough proof that this album's release is an overdue gift to the world.

Mind is one of those truly special albums that gets better with each passing song - a collection of music clearly made by passionate people committed to producing genuine art. The greatest star of the show is Schreck's ever-versatile voice, an instrument that reaches its zenith when the man sings his heart out on “Free.”

Brimming with brilliant ideas that are far from dated, Mind truly sounds like an album recorded in the here and now. The album's release is even more important considering that many of the places (and at least one very special Punk singer) that helped shape The Ancients' original era are no longer with us. It would be a shame if the Schreck/Visconti partnership doesn't take advantage of Mind's arrival to create new sounds in the future. The world needs more music as perfect as this.