Releasing a collection of Folk songs from the British Isles is probably not be the best way to achieve Pop stardom in 2015, but it was how 10,000 Maniacs succeeded in making one of the year's finest albums.

On Twice Told Tales, the veteran Alternative Rock group (singer/violist Mary Ramsey, keyboardist Dennis Drew, bassist Steve Gustafson, drummer Jerry Augustyniak and guitarist Jeff Erickson) takes on music rarely (if ever) embraced by a commercial act. Although exploring sounds from the British Isles is an esoteric task for most other artists, this style of music has been a recurring theme in both 10,000 Maniacs and Ramsey's solo work (and her endeavors with John & Mary) for some time.

“The way I sing and the way we play and write music is sort of based on the style and the story content of a lot of the old tunes from the British Isles,” says the singer over the phone from the western corner of New York. “It was a real natural fit to find pieces that I had played before and the band had played before, record them and put our own treatment to those songs.”

Fans of 10,000 Maniacs will surely know more than a few songs off Twice Told Tales from the band's shows in recent times, especially "The Song of Wandering Aengus,” which Ramsey has performed a cappella in concert on numerous occasions.

“It would be a moment when the crowd was just ready to hear something quiet because whenever I've done it, the room goes just pin-drop quiet,” she explains. “The words to that poem are just beautiful.”

This audience's reaction to this approach served as a catalyst for the band's most recent adventure in the studio.

“When we kept doing it and it got that same kind of response, Dennis and I were talking [and said], 'Wouldn't it be neat to do just a whole CD of just these British Isles songs that we've all kind of liked?'” Ramsey recalls. “They do work very well with our band instrumentation.”

Like 2013's Music From The Motion Picture, Twice Told Tales was funded thanks to a successful PledgeMusic campaign. Using crowdfunding was a sensible move for 10,000 Maniacs, as Ramsey credits the band's fanbase for helping them maintain momentum in recent years by building a “cyber portal” of like-minded supporters around the world through social media.

“It's not about the selling of the CD; it's about having an artistic outlet, having a project and getting it completed and feeling like this is the representation of what we are for ourselves,” she says. “And then to share it with the audiences that want to hear us is cathartic for us as a band and for the individuals in the group.” 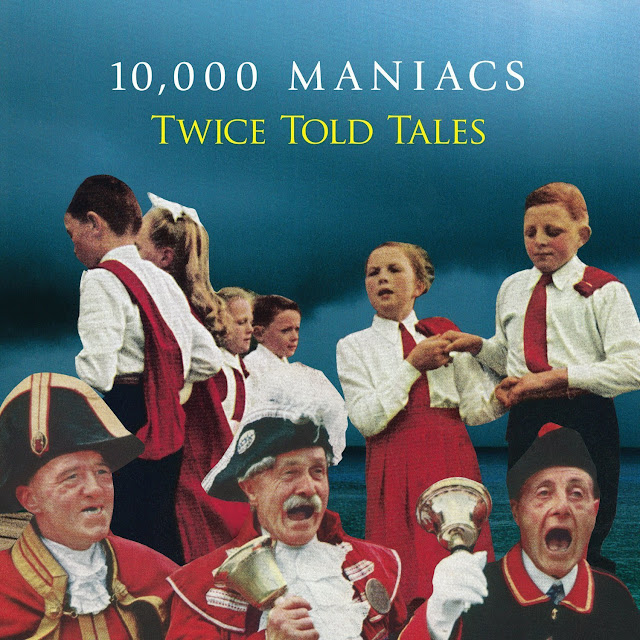 Twice Told Tales features contributions by 10,000 Maniacs co-founder John Lombardo, who was involved with the creative direction of the entire project and has been performing live with the band on an occasional basis. Although Lombardo's presence in the band has been on and off since his first departure in 1986, Ramsey is pleased to have had his involvement on this most recent collection.

“I think he has a lot of different interests,” she says of his sporadic membership in the band. “He's a visual artist, so I think his time is quite occupied with that. We're just glad that we have the chance to have this CD [with him] and continue to do collaborations.”

Ramsey's artistic relationship with Lombardo dates back to the late '80s, when the two began recording and performing as John & Mary. (Their 1991 debut, Victory Gardens, is an essential listen.) Initially hitting the stage with the Maniacs to add backing vocals when John & Mary were the opening act on the band's 1990 tour, Ramsey continued to augment the group during their hit-making Our Time In Eden/MTV Unplugged era. When original lead singer Natalie Merchant left the band in 1993 to pursue a solo career, Ramsey took over the vacancy and Lombardo officially rejoined the fold. Despite the personnel shakeup, the revamped lineup's first effort, 1997's brilliant Love Among The Ruins, remains one of the strongest releases in the 10,000 Maniacs catalog.

“I think [that album] really has stood the test of time in terms of the recording sound, but more importantly, I think that everybody played really well on that and sang very well,” Ramsey says. “[Our cover of Roxy Music's] 'More Than This' was [the] Maniacs' biggest-selling single in their history... I feel like it's nice to have something where you go away from it for how many years now – it came out in '97, so it's almost 20 years – and it's interesting for me to look back on that and listen to it and say, 'Wow!' I notice things that I hadn't noticed before. It's kind of turned into something a little bit different than what I remembered years ago. I'll be in the grocery store and I'll hear something like 'Even With My Eyes Closed' and I think, 'Oh, that sounds familiar.' Then I go, 'Wow, that's me singing!' That's weird!'”

After one more album (1999's criminally underrated The Earth Pressed Flat), Ramsey and 10,000 Maniacs parted company. Oddly enough, history repeated itself in 2007 when she rejoined the band (then fronted by Oskar Saville) to once again serve a support role singing backups and playing viola. Before long, it was 1990-1993 all over again, and she was back in the lead vocal spot. The “weird fate” behind her second and current stint in 10,000 Maniacs suits the free-spirited musician just fine.

“[When I initially came back], I just thought, 'Well, I don't have any problems just coming back and playing violin, viola and singing a bit','” she recalls. “At that point, I had decided to move back to Buffalo, so it all sort of fit in.

“What was really wonderful was that once I got back into singing and writing, it was just a natural fit,” she adds. “It all came back to us like old muscle memory.”

In addition to tracks off the new album, the band's recent performances have included older treasurers like “Pit Viper” from 1983's Secrets of the I Ching, “Can't Ignore The Train” from 1985's The Wishing Chair and “Cherry Tree” from 1987's In My Tribe. The band has even been known to throw in an exceptional rendition of The Cure's “Just Like Heaven” from time to time.

As Ramsey explains, “I said to those guys about five years ago, 'Let's try this. I've always loved The Cure and I love this song. I want to do this.' At one soundcheck, we started doing it and it worked out so well, and people love it... A lot of the people in the audience are from our era and people who know these tunes and remember going out, dancing and having fun – and they're doing that now.”

A portion of the PledgeMusic funds raised for the project has been set aside for the Rob Buck Memorial Scholarship, which was established to honor the memory of the band's founding guitarist. Fifteen years after Buck's untimely passing, the band is committed to ensuring that his musical legacy lives on.

“[The Scholarship] is something that we will continue to have because [Rob] was a very special person we lost too early,” Ramsey says. “Our goal is to have a scholarship fund that will help young people who are interested in music develop their craft. There are a lot of people who need funding and support like that. It's something that we hope spiritually will keep the memory of Rob alive – [not just] his music, but the idea of creativity and a place for a person to feel a sense of self, expression and identity. Music can help people of any age, but it really helps a young person if they have a sense of themselves and a sense of value.”

With Twice Told Tales, 10,000 Maniacs prove that a band can produce some of their most captivating work more than three decades into their career. Every note on the album serves as a reminder of the magic first developed when Dennis Drew, Steve Gustafson and John Lombardo co-founded the group in 1981. With Augustyniak keeping time since 1983, Erickson supplying guitars for 15 years and Ramsey involved with the band in one form or another for a quarter century, it is clear that 10,000 Maniacs is as much a family as they are a working band. In Ramsey's mind, 10,000 Maniacs' inspiring longevity is based on a mutual love of making music.

“There's a lot of life to [the band],” she says. “Every time we do a show, it's another validation that, yes, people do like this music, identify with it and value it. When you have people clapping and standing up and giving a positive response, sometimes you wonder, 'Wow, this is really surprising!' It's something that's contagious. I think that's been a big motivation for all of us.”

With a history dating back nearly 35 years, 10,000 Maniacs have earned the right to do whatever they want. Years removed from the top of the charts but still drawing a devoted following, the group has used the crowdfunded Twice Told Tales as an opportunity to explore the kind of traditional Folk music that inspired their earliest days. Just like everything else released by the band through the decades, Twice Told Tales is a beautiful experience produced by players at the very top of their craft.

The album's greatest strength is its balance between the band's celebrated past and eclectic present. While songs like “Bonny May,” “Carrickfergus” (a song performed live by John & Mary over the years) and singer Mary Ramsey's breathtaking a cappella rendition of William Butler Yeats' “The Song Of Wandering Aengus” showcase the decidedly uncommercial aspects of the album, the more conventional “Dark Eyed Sailor” and “Canadee-I-O” could have found a comfortable place on an earlier Maniacs album like Blind Man's Zoo.

Yes, it is hard to imagine something like “Misty Moisty Morning” or “Marie's Wedding” being a Pop hit in 2015. Yes, the album's string-heavy approach guarantees a limited audience. But what Twice Told Tales offers most is an immensely enjoyable representation of a maturing band doing nothing but creating art out of love. Wouldn't it be wonderful if all of our favorite bands lasted long enough to reach that point?