Anvil is Anvil: The Continuing Adventures of Metal's Most Determined Band


Most soon-to-be-60 year olds wouldn't think of celebrating such a milestone by going on a lengthy tour with their long-running Metal band, but that's exactly what Anvil singer Steve “Lips” Kudlow was gearing up to do at the time of our recent call. Jovial and full of energy, Kudlow couldn't contain his excitement over the current state of his band's long career. On February 26, the veteran Canadian act (completed by drummer/co-founder Robb Reiner and new bassist Chris Robertson) released their 16th album, Anvil Is Anvil (SPV/Steamhammer) – a collection not only created for the fans, but with the fans.

Last summer, the band launched a PledgeMusic campaign to fund the recording of Anvil Is Anvil, offering a slew of special fan incentives including a guitar lesson with Kudlow, a drum lesson with Reiner and an opportunity to sing backing vocals on the album. The group's inaugural experience using crowdfunding was a rousing success, raising 115 percent of their goal and enabling the band to produce the follow-up to 2013's Hope In Hell in financial comfort. The end result is 2016's first bona fide party record, with crushing riffs fueling fun (and funny) tracks like “Zombie Apocalypse” and “Fire On The Highway.” The tone of the album is set by the opening “Daggers And Rum,” an earworm devoted to (you guessed it) pirates. The song's creation began in 2014, when Canadian filmmaker and performer Spookey Ruben asked Kudlow to play a pirate -  Captain Nelson “Snarls” Hornswoggle -  in a sketch called “The Curse of Eggbeard Island” in his live variety show, Dizzy Playground LIVE! Kudlow was also asked to compose a pirate-themed song for the affair.

“I went, 'What the fuck? A pirate? Okay,'” he recalls. “[Spookey] sent me a picture that he put together with an art program on his computer of me as a pirate, and I just fucking cracked up, man! It was fucking great. I go, 'Okay, now I'm inspired!'”

Taking his cue from the classic Riot track “Swords And Tequila,” Kudlow named his song-in-progress “Daggers And Rum” and promptly went on an Internet hunt for pirate shanties for further inspiration.

“I came to realize that 90 percent of what was written on the Internet was originally used in musical plays - H.M.S. Pinafore and things like that,” he explains. “[I thought,] 'Pirate shanties are stuff that's really made up after the fact, they're not made up by pirates.' Basically, that's that feeling I got. I said, 'Okay, there's nothing authentic, so I'm gonna make one up myself.'”

Once the lyrics and vocals were in place, Anvil brought in the PledgeMusic supporters who chose the premium to sing backing vocals on the record to come and add their voices to the song's unforgettable chant: Yo ho ho/Yo ho ho/Give us a bottle of rum/Yo ho ho/Yo ho ho/We be the scurvy scum.

“The people had no clue,” recalls Kudlow of the experience. “They were going, 'What the fuck? This is going on an Anvil album? What is this?'” (laughs) 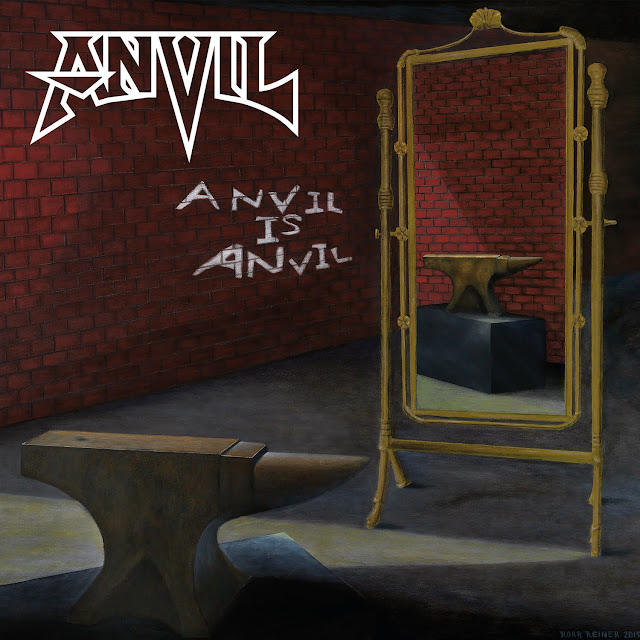 This kind of fun, lighthearted spirit has been a staple of Anvil's world since the 2008 premiere of the now-legendary documentary film, Anvil! The Story of Anvil (directed by the famed screenwriter and former Anvil roadie Sacha Gervasi). After years of stress and struggle in one of the most savage industries in the world, Kudlow finally achieved global recognition – and saw his life completely turn around. When fans saw the film, they got an intimate view inside the life of a middle-aged man working at Choice Children’s Catering and playing at mostly empty venues. But thanks to the film's popularity and a renewed interest in the band, Kudlow was finally able to fulfill his decades-long dream and do Anvil as a full-time profession.

“It's fantastic, miraculous,” he says. “I'm grateful as fuck.”

While Anvil stands as an encouraging example of success through perseverance, Kudlow cautions newer musicians that the industry is not the place to look for riches.

“Basically and fundamentally, the equation is 90 percent for them and 10 percent for us,” he adds. “It works like that all the way to the fucking top. That's the real truth. You've got to fucking dig in and work your ass off to get anything out of this; it's just the way it is. If you look at a band like Metallica, they spend $1 million putting on a show. Well, that's all the money they might get paid for the show. Where are they making their money? Probably the t-shirts, and that's precisely what the fuck it is. You don't make money from royalties. There's no more record sales; it's almost gone. The only time music is worth anything is before you record it.”

Thankfully, this dilemma is no longer a problem for Anvil. Kudlow says that Anvil Is Anvil is the first release to not leave the band in debt – a feat achieved thanks to the success of the PledgeMusic campaign. Not surprisingly, the guitarist is quick to sing the crowdfunding platform's praises.

“Fans are getting this incredible fucking opportunity to be completely attached to the band and be directly involved with the band,” he says. “It's so much more of an intimate situation. On the financial side, they just paid for your record; there is no advance. We don't create our own vinyl, so [we] give the rights to the record company so they can create vinyl, so they give you an advance. So now, you've got money from Pledge, you've got money from the record company...son of a bitch, we're not in the hole! We don't owe any money, and the record's coming out. What?! (laughs) For the first time in 40 years, we're on top rather than in debt after finishing a record. The new model works better than the old model ever did.”