Permanent Youth: A Night in the Life of Michael Monroe


Sitting across from legendary Finnish singer Michael Monroe on his tour bus on a chilly winter night in Boston, I take a hard look at the former Hanoi Rocks frontman and wonder how in the world he's going to get through his set in a few short hours. While he offers wide smiles and displays an incredibly cordial demeanor throughout our conversation, it's hard to ignore that the guy is clearly struggling through (at the very least) a bad cold. Despite his illness, he's handling his interview commitment with aplomb. Wanting to give the guy a chance to rest, I cut our chat short and bid Michael farewell. He gives me a fist bump and another big smile as I head off the bus and cross my fingers that all will go well when it's time for the show to begin.

I shouldn't have worried. From the moment Monroe ran on stage to the last notes of the encore, the man performed at the highest possible level. From jumping on the bar and singing his heart out to wailing on his saxophone and harmonica, he gave the crowd a nonstop burst of energy that didn't give a second's hint that he was sick, let alone in his 50s. Nearly 37 years after his first live performance with Hanoi Rocks, Michael Monroe remains the quintessential entertainer.

Monroe is on the road these days in support of Blackout States, his tenth solo release and the follow-up to 2013's Horns and Halos. A stellar album from start to finish, the 13-song collection easily stands up to the best moments in his back catalogue. (Just listen to “Keep Your Eye On You,” “Good Old Bad Days,” “Permanent Youth” and “Walk Away.”) In addition to former Hanoi Rocks bassist Sami Yaffa (who's also played with The New York Dolls and Jetboy), Monroe's current solo band includes drummer Karl “Rockfist” Rosqvist (Danzig/Son Of Sam) and former New York Dolls/Company Of Wolves guitarist Steve Conte. After stints with Ginger Wildheart (The Wildhearts) and Dregen (Backyard Babies/The Hellacopters), the group recruited former Black Halos/Amen member Rich Jones on second guitar prior to recording the new album.

“It's not that often you see and hear a band like this,” says Monroe of his cohorts. “It's real authentic, honest, from the heart and with the right attitude. That's what real Rock 'n' Roll, to me, is about.”


As frontman of Hanoi Rocks, Monroe was the voice on five of the greatest Rock records of the '80s. Armed with the bulletproof songwriting talents of guitarist Andy McCoy, the band released four albums in Europe (1981's Bangkok Shocks, Saigon Shakes, Hanoi Rocks, 1982's Oriental Beat and Self Destruction Blues and 1983's Back to Mystery City) before landing a deal with CBS Records for 1984's Bob Ezrin-produced Two Steps from the Move. The band was on its way to an American breakthrough when a December '84 car accident took the life of drummer Nicholas “Razzle” Dingley. (Razzle was riding in a car driven by Motley Crue singer Vince Neil, who was charged with vehicular manslaughter and driving under the influence of alcohol. Neil later served a brief jail term and paid approximately $2 million in restitution to the two people in the vehicle he struck, who both suffered serious injuries. According to a September 21, 1985 story in the Los Angeles Times, Dingley's estate received $200,000.)

Devastated, Hanoi Rocks (minus a departed Yaffa) carried on for another six months with former Clash/future Black Sabbath drummer Terry Chimes stepping in before the group finally imploded in the summer of 1985. In 1990, Geffen Records – under the Uzi Suicide imprint created for longtime Hanoi Rocks fans Guns N' Roses – released the group's European catalog in America, introducing a new crop of fans to what could have been. 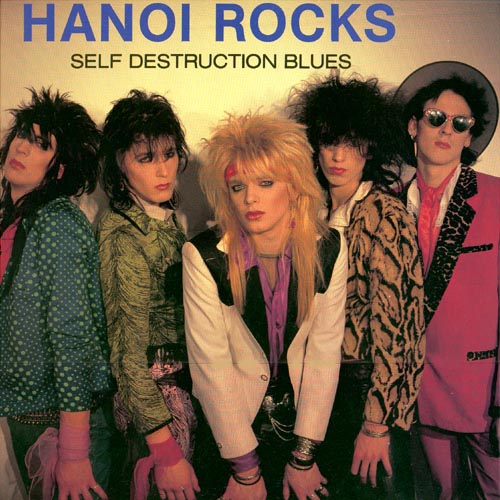 Two years after Hanoi Rocks' career was tragically cut short, Monroe issued his first solo album, Nights Are So Long. After five more solo releases (including 1989's still-awesome Not Fakin' It) and stints fronting the short-lived '90s bands Jerusalem Slim and Demolition 23 (which both featured Yaffa), Monroe did the unexpected and joined forces with McCoy and a revolving door of musicians (including The Electric Boys' Conny Bloom and Andy Christell) for a new version of Hanoi Rocks. This incarnation yielded three solid albums - 2002's Twelve Shots on the Rocks, 2005's Another Hostile Takeover and 2007's Street Poetry - before the band said goodbye for a second time.

“It came to a point where it wasn't fun anymore,” admits Monroe regarding Hanoi Rocks' 2009 breakup. “I would have never done a reunion where we had just done a one-off tour to make money. We just got to know each other again in a different, more meaningful way than before, and it was interesting to see what we could create together. If it had continued to be fun, I was ready to do that the rest of my life. But it just came to a point where it wasn't going forward anymore... We decided to put the band to its final rest with its integrity intact honorably, without any shit-slinging in the press or arguments or anything stupid like that. It was just time to call it a day; it was a good decision. I wanted to maintain Hanoi's integrity, like my own.”

With the band again a memory, Monroe set his sights on resuming his solo career. Yaffa, who had been unable to participate in the rebirth of Hanoi Rocks due to his involvement with the reformed New York Dolls, was the first to join the singer's new backing band. Now, decades after he first played with Yaffa in Hanoi Rocks, Monroe is thrilled to still have his longtime friend at his side.

“We're blood brothers; we were separated at birth,” he says. “He's been my best friend throughout the years; everything we do together always comes out good.”


In an industry known for chewing up and spitting out even the most popular artists, Michael Monroe has outlived many of the bands he's influenced. With music careers getting shorter every day, his ability to deliver the goods year and year is proof that the real thing never fades away without a fight.

“Never compromise your integrity,” he says. “Always stay true to yourself and be honest and truthful. Don't take the easy way out to make a quick buck. Do it for the right reasons and always stay hungry. You should always try to strive for better, for greatness – which you never achieve, really, but you can always get better at what you do. What keeps me hungry and keeps me trying is knowing that I can always improve.”