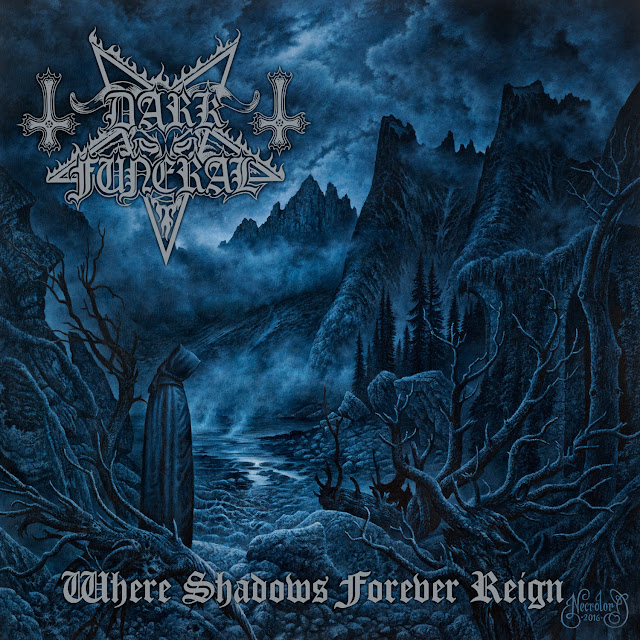 When more than a few corpse paint-donning ensembles were building careers with cacophonic compositions and sub-basement production, Dark Funeral established an international reputation by adding genuine craft and melody to their musical menace. With sole original member Lord Ahriman leading the charge, the band have reached a new creative level on Where Shadows Forever Reign, their first album since 2009’s Angelus Exuro Pro Eternus and their debut full-length release for Century Media.

The release of Where Shadows Forever Reign comes at an important time in the history and development of Black Metal. With the scene a good three decades old at this point, its survival depends on bands’ willingness and ability to take their sounds into new and more accomplished territories. Fortunately, Dark Funeral raise the bar for the genre with a sonically mature album fueled by their strongest performances and songwriting achievements to date.

While the forceful grunts and screams of new singer Heljarmadr would already make Where Shadows Forever Reign a captivating experience, drummer Dominator is the true star of the show, delivering blistering blast beats and double-kick fury (“Beast Above Man,” “As One We Shall Conquer”) along with a heavy dose of sinister mid-tempo groove (the epic “As I Ascend”). Although Where Shadows Forever Reign is a vicious listen from beginning to end, Lord Ahriman and company have the skills and musical vocabulary needed to elevate the proceedings beyond a typical noisefest. This is a rare breed of truly sophisticated and structured Black Metal that boasts as much intelligence as it does primal power. (The album's greatest moment, “The Eternal Eclipse,” is essential listening for any fan of extreme music.)

It’s obvious that Dark Funeral worked hard to make Where Shadows Forever Reign a landmark album, and the effort has paid off in spades. This is the record we’ll all be referring back to years from now as the moment Black Metal took a major leap forward.

While Where Shadows Forever Reign points to an intriguing future for Dark Funeral, the album is also an undeniable nod to a past. This year marks the 20th anniversary of the band’s classic full-length debut, The Secrets of the Black Arts – the only other album in the band’s discography to not feature a Latin title. Additionally, Black Arts album artist Necrolord returned after two decades to create the perfect visual accompaniment to the new record. Playing both albums back to back, it’s amazing to hear the progress made over two decades. In a sea of throwaway bands, Dark Funeral are the real deal.

Where Shadows Forever Reign is a bulletproof high-water mark of an often-misunderstood genre and the most essential album of its kind since Mayhem’s De Mysteriis Dom Sathanas.