The Down Boys Grow Up: An Older but 'Louder' Warrant Still Deliver

There was a time when the guys in Warrant had the music industry in the palms of their hands.

In the three years before Nirvana’s “Smells Like Teen Spirit” signaled the commercial end of what is commonly (if often ignorantly) referred to as “Hair Metal,” the classic lineup of Warrant – singer Jani Lane, bassist Jerry Dixon, drummer Steven Sweet and guitarists Erik Turner and Joey Allen – sold millions of albums on the strength of a slew of powerhouse singles including “Down Boys,” “Heaven,” “Uncle Tom’s Cabin,” “Cherry Pie” and “I Saw Red.” The band’s first two albums, 1989’s Dirty Rotten Filthy Stinking Rich and 1990’s Cherry Pie, both reached the Top 10 of the Billboard 200, while the band scored five #1 videos on MTV at a time when such an achievement truly mattered.

So…how did Warrant follow up these massive career accomplishments? By releasing quite possibly the most underrated, misunderstood and career-derailing album of the ’90s.

With the Grunge explosion in full effect, the band rolled the dice on presenting a considerably harder sound of 1992’s superb Dog Eat Dog. An absolute stunner of an album, Dog Eat Dog showcased Warrant’s willingness to take experimental chances (“The Bitter Pill,” the cerebral and utterly intriguing “Andy Warhol Was Right”) and bring their brand of Sunset Strip-fueled Rock to a much heavier level (“All My Bridges Are Burning”). Of course, the masses weren’t about to give bands like Warrant any real attention in the age of Pearl Jam, and Dog Eat Dog’s sales suffered the fate of being a great album at the absolute wrong time.

This misfire kickstarted not only years of lineup and label changes, but also ongoing internal issues between the band and singer Jani Lane – whose issues with alcohol often gained more media attention than the band’s post-Dog Eat Dog material. With the exception of a four-year stint with Black 'N Blue vocalist Jaime St. James (resulting in 2006’s Born Again), Warrant and Lane held together until 2008, when the singer was permanently replaced by former Lynch Mob/Cry of Love frontman Robert Mason. (Lane continued to battle his demons with varying success until his death in 2011 at the age of 47.) Since 2008, Mason has fronted a lineup completed by surviving classic-era members Dixon, Turner, Sweet and Allen (who reformed in 2004).

Produced by current Foreigner/former Dokken bassist Jeff Pilson and released in May on the prolific Italian label Frontiers Music, Louder Harder Faster is Warrant’s ninth studio album and their second with Mason at the helm. Mixing Dog Eat Dog’s heaviness with the streamlined, straightforward songwriting approach of the first two Warrant albums, Louder Harder Faster offers an excellent balance between both extremes while showcasing some new - and downright surprising - musical directions. The twin guitar swagger of “Only Broken Heart” and the bulletproof “Devil Dancer” are reminiscent of Renegade-era Thin Lizzy, while the bluesy “Music Man” and the smoking “New Rebellion” update Warrant’s sound enough to make them a band to take seriously in 2017.

If you’ve followed Warrant since the beginning, you know that the band’s current incarnation delivers the goods. If you walked away from Warrant and other ’80s-era bands long ago and look at a new album from them with an eye roll and a smirk, it’s time to give Louder Harder Faster a listen and be pleasantly surprised by how strong this band really is in the here and now. This record smokes.

I recently touched base with Jerry Dixon to discuss the new album, the 25th anniversary of Dog Eat Dog and what the future might look like for one of Rock’s most resilient acts.

It’s been about six years since you guys last put out an album [2011’s Rockaholic]. What led to that kind of gap between records?

Well, the main thing is that we don’t live by each other anymore. I moved to Vegas, Robert and Steve live in Arizona and Joey and Erik are still in California. We tour so much that it’s like, ‘Ah, shit. Okay, who wants to leave their house for a month and get together and write?’ A lot of bands do records now over the internet, but we like to do it in a room and do it together. That’s the main reason why it took so long.

This is your second album with Robert fronting the band. What makes him the right frontman for Warrant in 2017?

I think from day one, he just fit right in. When we got Robert, we weren’t going to try a bunch of singers out; we weren’t really sure what we were going to do. We tried to get together with Lane, and his drinking flared up again and he just kind of said, ‘You know what? I can’t do this, you guys. I’ve got to get help.’ We did about 10 or 11 shows. We were just kind of like, ‘Okay. What are we gonna do?’ We had actually bumped into Robert; we’ve actually known Robert for maybe 25 years. We used to tour with Lynch Mob, and he was a good friend of Jani’s and a good friend of ours. He was always a fan of the music; he always liked our songs and liked the band. We bumped into him at Rocklahoma and said, ‘Hey, what do you think about this?’ He was like, ‘Yeah, man!’ We flew him out to LA and we jammed for an hour or so, and he just fit right in. Sometimes the higher power brings shit together. It was just one of those things. He just always felt right. What I like about him is that he’s still himself and he really does well on the older stuff.

I really like the double guitar work on this new album. A couple of instances, especially “Only Broken Heart,” remind me a lot of Thin Lizzy. Was there a clear Lizzy influence that you put in there?

I think just on that song. It’s funny, because that song was originally very unThin Lizzy. It was actually called ‘’80s Ladies,’ and Robert hated that title! He said, ‘God, I can’t sing that title. I hate it! I hate it!’ In the bottom of the ninth, he came in and re-wrote all of the lyrics. Out came the Thin Lizzy influence. It was like, ‘Ah, that’s very Thin Lizzy, dude!’ But it’s cool; we all grew up on Thin Lizzy. We were totally aware of that, but we were like, ‘Yeah, it is what it is.’ It’s a cool song, and it’s a band we all love and grew up on, so we just let it fly.


I get a lot of records from Frontiers, and it’s a lot of music that I grew up on and still have a real love for. When talking to other artists who are on that label and still do a lot of touring, there seems to be a really strong audience in Europe for this style of music. What has your experience been with that phenomenon? Why do you think the European audience seems to still really celebrate and support this genre?

I don’t think they change bands as quick as we do here. In America, there’s a new flavor every month. Maybe the Midwest is kind of like Europe; they like what they like and they don’t care when it came out. They’re real picky about their music, but if they like you, they love you. I just think that they’re not so into what’s ‘hip;’ they just enjoy their favorite bands and stay loyal to them.

The first album is 28 years old at this point –

Any band is lucky to have a career for that long. You have this new album out, and it seems like the lineup is really working well for you guys. What are the long-range plans for Warrant at this point in time?

I would imagine we’ll probably do one more record in another four or five years. What we really want to do – and what we’re trying to do – is to be able to do more headlining shows and capture a bigger audience in bigger rooms and stuff like that and stay relevant along the way. We’re kind of in a good spot now because a lot of the Classic Rock [acts] like Foreigner, Molly Hatchet and Lynyrd Skynyrd are ahead of us, and they do really well. It's weird; as soon as they hit that golden age, it just puts them up to another level. We’re hoping that we get there.

This year is the 25th anniversary of the Dog Eat Dog record. That record’s always been of particular interest to me, because it was obviously a departure for Warrant during some really interesting times in the music industry. When you look back at that album now, what are thoughts on it in terms of its place in Warrant’s history and its success as a Warrant album?

I think we really found who we wanted to be on that record. You do your first record, and those are the songs that you played in the clubs. Then, we did the second record, and that was a lot heavier; it had ‘Uncle Tom’s Cabin.’ That was the vibe we were going for, and at the last second, [the label] wanted a big anthem, ‘We Will Rock You’- type song. Out popped ‘Cherry Pie,’ and it changed the face of the Earth. (laughs) It was the title of the record, and we were like, ‘Oh, wow!’ I mean, we’re thankful, but that wasn’t the master plan. When Dog Eat Dog came up, we had a little time off and time to reflect on kind of what happened to us – all the good stuff and all the touring. We just said, ‘You know what? Let’s really just make a serious kind of record. Seriously play and make the songs have more substance.’ We just kind of grew up a little bit, and I think that was kind of the sound in the band that we were always striving to end up being. I think it just came out a little bit too late. The Grunge wave hit, and it just got clobbered.

The band had a few lineup changes over the years, but we’re at a point now where the four surviving members of the classic lineup have been working together again for a few years now. What makes the combination of the four of you work as well as it does to where it’s still the same four guys nearly 30 years later?

I think it’s super cool that we’re able to do that. I think other variables made the lineup change along the way. There were a lot of hurt feelings; there was a lot of shit that happened. We had a horrible run for about 10 years. We lost all of our homes, we went bankrupt, our manager died and to cap it all off, Jani ends up passing away. It was just fucking horrible. At the end of the day, there’s something that four people – or any band – do when they play [their] songs that can’t be duplicated. We’ve had other drummers and other guitar players and things like that, and it just doesn’t sound the same. I think now, with all the deaths and all the horrible things happening to us, the four of us are so happy that we’re actually a functioning band. This is kind of what we wanted all along. It took forever to get to this spot where things are cool and there’s no more drama. We can just go play music and have fun.

*Portions of the above interview were edited for space and clarity. 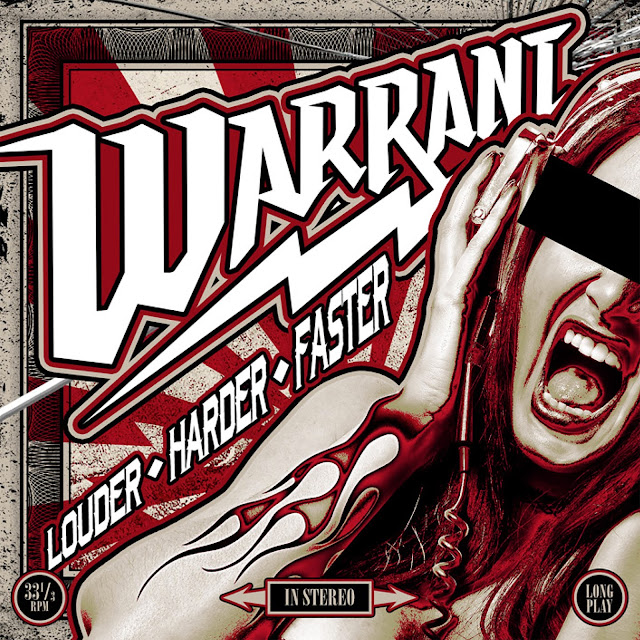