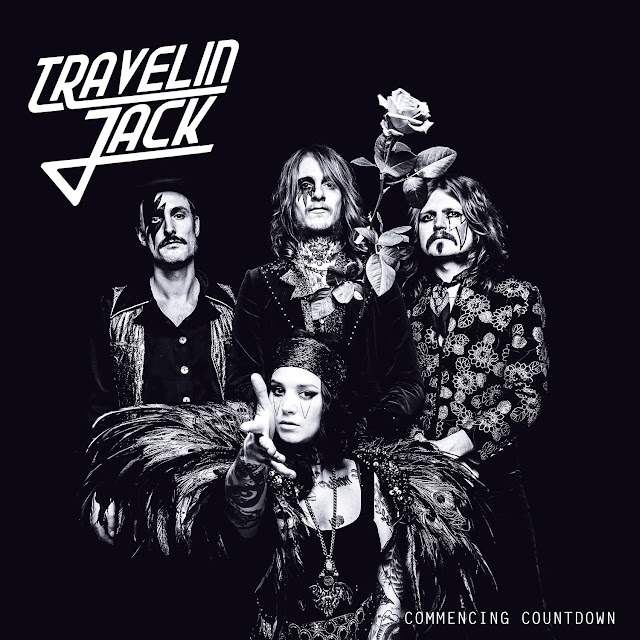 Imagine Stacia from Hawkwind fronting The Sensational Alex Harvey Band as they burn through Bluesy renditions of numbers from the early/mid-’70s Heart and Alice Cooper Band songbooks. Throw in support from one of the most active Metal labels around today (Steamhammer/SPV), and you have Commencing Countdown, the stellar second album from Germany’s Travelin Jack.

Easily the best album to hit this writer’s desk so far in 2017, Commencing Countdown is a record as intense and intriguing as the personalities who created it. First, there’s captivating professional tattoo artist and face-painted powerhouse Alia Spaceface, who hits you in the chest with a voice that is equal parts Grace Slick and ’70s Soul (while occasionally blowing minds on second guitar). The rest of the crew (bassist Steve Burner, guitarist Flo The Fly and drummer Montgomery Shell) add plenty of color and fire of their own. Just take a look at the live performance below:

Reflecting on the current state of affairs with Travelin Jack, Burner views Commencing Countdown as a sonic step forward from the band’s debut release, 2015's equally recommended New World.
“When we started writing New World, we also started the band. Alia began writing songs, and we were looking for musicians to form a whole band. I think we wrote three or four songs for the first record, and then we started writing together [with the other members] in the rehearsal room. On the second record, everybody was more into the whole process of the songwriting. I think that’s the reason why it’s a bit catchier and groovier.”
While Travelin Jack’s look succeeds in attracting attention (aided, of course, by their Stephen King-inspired moniker), Burner reveals that there is was no grand scheme behind their choice of aesthetics.
“It was more or less an accident! When we started the band, Alia and I had wanted to do this glammy stuff for a long time, but we never got the right people for that. We started writing music and playing together, and we thought, ‘What can we do to do something special to give it a whole package?’ She told me that she was totally into David Bowie…We said, ‘Why don’t we do something like this?’ Since the first gig we played in 2014, we’ve had the makeup.”


Travelin Jack’s rise follows in the footsteps of a slew of impressive acts to come from Germany in recent years. (The amazing Lucifer easily come to come). Burner is happy to see his group add to the excitement being generated in his homeland.
“At the moment, there’s a really good scene – especially in Europe. I’ve heard a lot of good stuff from Scandinavia, but there are really good bands from Germany, too – like Kadavar or Mountain Witch. It’s really cool, especially in Berlin; we can go to really good concerts. Even the bands from the U.S. like to tour here, so we have a lot of chances to see good bands.”
Naturally, with an album this great, it’s hard for its co-creator to identify a single track that would serve as the definitive point of entry for curious ears.
“I think what’s good about the second record is it has so many different sides. It’s hard to say one song, but if you want to get introduced to Travelin Jack, you [should] maybe have to listen to ‘Journey To The Moon,’ the last song on the song, where we say, ‘I’m a Travelin Jack/I want the good times back!’”
With Commencing Countdown sure to introduce new listeners to the magic Travelin Jack have to offer, Burner’s greatest hopes for the band's future are simple – and a clear philosophical roadmap for any group of musicians working these days:
“Playing, rocking and having a good time. That’s the reason why we make music. You can’t make any money with good Rock music in 2017, so [we] just have a good time and play Rock ‘n’ Roll.”