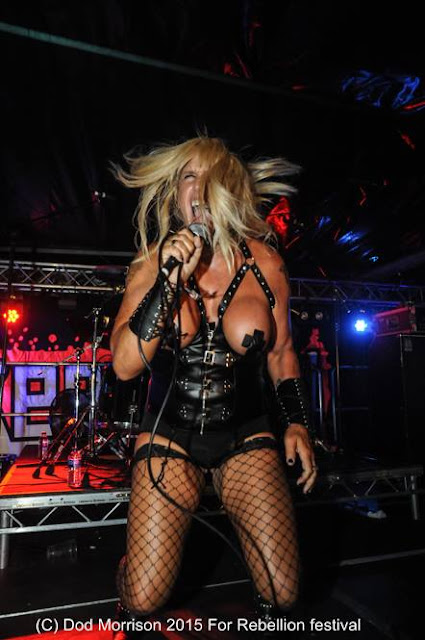 See Jenna Talia perform once, and you’ll never forget her.

Equal parts Iggy Pop and Jayne County, Talia is an atom bomb with a pro wrestler’s build, multiple tattoos and sizeable breasts – certainly not someone to ever challenge to a fight.

“I’m not what you consider a passable transgender person. I’m six feet tall; I weigh 240 pounds. I played football. When I go places, I stand out like a sore thumb. I don’t change my voice or my gate, and I don’t care if my arms are big. Fuck that; I’m not going to get skinny to make somebody else more comfortable.”

If her image doesn’t floor you, her music surely will. Since 2010, she has fronted Glitter Trash, a bulletproof Punk Rock ‘n’ Roll group founded in Detroit. In addition to the band’s raucous live shows, Glitter Trash has made a name for themselves thanks to their 2011 album, Wreckage. These days, Talia leads the group as its sole remaining original member.

“The band has been through a lot of members over the years. We have all working-class musicians in the band, so it’s not always the right fit for everybody at the right time. I’ve always kept it going and chugging along.”

Earlier this year, she decided to relocate to Los Angeles.

“With Trump as president, living in the Midwest kind of became unbearable. I headed this way in search of more open-minded folks who live a little bit happier of a life.”

Luckily for her, Talia had a friend to greet her in her new city. Two years ago, underground legend Loren Molinare – best known for fronting long-running Michigan-to-England-to-LA Punk progenitors The Dogs and playing guitar for Hard Rock/Blues stalwarts Little Caesar – crossed paths with Talia online, and the two sparked an instant friendship.

“I saw that somebody in Detroit named Jenna Tania like the video of The Dogs playing [our song] ‘Slash Your Face’ live in Tokyo,” Molinare recalls. “I thanked her for liking our video, and then she wrote back and somehow we became pen pals. We later talked on the phone. I came to realize that Glitter Trash was the most honest, passionate, in-your-face Detroit Rock band I had heard in decades. I went, ‘Fuck me! This is kicking my ass in a great way!’ She told me, ‘I think I’m going to come to LA.’ It was kind of like a bet; I said, ‘Oh, really, girl? If you come out, you can jump up on that stage and sing with us!’”

Two weeks later, Talia joined The Dogs on stage at Alex’s Bar in Long Beach for a performance of their cover of The Barbarians’ “Are You A Boy Or Are You A Girl?” that absolutely incinerated the place. The following year, Molinare sat in with Glitter Trash for the band’s performance at the 2016 Rebellion festival in Blackpool, England. Before long, Talia set her sights on moving to the west coast and building a new Glitter Trash with Molinare officially in tow.


The Dogs’ Tony Matteucci is currently filling in on drums, while the bass spot is occupied by Chuch Rauda.

“Chuch is an unbelievable bass player – the best I’ve ever had or seen,” Talia says.

The current incarnation of Glitter Trash is actively working on new material, including “The Chopper Song,” a tune inspired by Talia watching LAPD helicopters flying around in Echo Park. Another song, “Something To Believe In” (written by Molinare and former Personality Crisis guitarist Richard Dugauy), is slated to appear on a soon-to-be-released split seven-inch with The Dogs on New Fortune Records.

“We’re crawling before we can walk or run, but it's falling together real quick,” says Molinare of the sounds coming from the writing sessions. “It’s like a snowball going down a mountain.”

For Talia, working with Molinare has been a rewarding and life-changing experience.

“He’s a force of positivity. He kind of lured me over this way and showed me what was going on in this area. I’m very happy to be here. It’s a great scene; it’s very vibrant, diverse and big.”

In addition to steering Glitter Trash in a new direction, Talia is using her time in LA as a critical step forward in her evolution as a transgender person. That journey began in childhood, and it has been an intense and tumultuous ride ever since.

“It was mishandled from the time I was a kid. Where I grew up, my family didn’t know how to deal with it, so they tried to sweep it under the rug. I remember my mom telling me, ‘We could take you to a priest to talk about this.’ I went to an all-boys Catholic school. She didn’t know what else to do. I said to myself, ‘Okay, I’ll just go into hiding. I grew up with a sense of shame and hiding who I was. Doing that really affects your relationships with people; you always have something to hide, and people don’t really understand the pain and torture that goes with being transgender. It really fucked me up, and it fucked up several relationships I was in.”

Talia first came out as transgender in the mid-’90s while living in Cleveland.

“I’ve dealt with this for years and years and years. When I first acknowledged it, I would go out in public and people would literally ridicule me and laugh at me. When camera phones came out, people would come to me sitting at a table, take a picture of me and go and show it to all their friends sitting at their table – just fucked up shit like that. It was painful to be made fun of. I basically didn’t want to go out anymore; I became a hermit and stayed in the house. It was that unhealthy.

“I ended up going through some rough times. My wife left me; I had two kids with her. I ended up getting divorced over transgender issues. Of course, I would go back into hiding and be a boy again. I just lived in a fucked up way, trying to fit in. I feel sorry for my wife that I put her through that. It was a terrible thing.”

With her life in a state of collapse, Talia moved into a dingy hotel while struggling to find the desire to go on. Eventually, she conceptualized Glitter Trash as a way to face her pain and take out her frustrations.

“The world was ending for me. I saw Glitter Trash as the only way I could actually vent and express it. I saw no representation of anyone transgender other than in the hidden gay scene, which I wasn’t really a part of. I thought the best way to make people like me more visible was to step on stage. That, combined with a lot of the anger I had regarding being transgender, made me like a little volcano about to blow. I used to be in corporate sales, if you can believe that. The next thing I know, I’m living in this shithole and everything’s going down the tubes financially. I just went out and tore everything up. When we went out in Detroit and played, I would literally tear shit off the walls and go crazy, so we got banned everywhere.”

Despite the ever-present handwringing of conservatives, Talia believes that the lives of transgender Americans are beginning to change for the better.

“I think people who have felt that way are becoming more vocal. They feel the environment is safer for them to do that now. Like everybody else, they want to contribute to society, go to shows and go out shopping without being ridiculed or made fun of.”

Armed with a powerful new Glitter Trash lineup and a new place to call home, Talia is looking forward to a fulfilling future, even if obstacles still present themselves from time to time.

“I’m not Caitlyn Jenner. I’m not rich, and I don’t have rich friends. My friends are musicians, and we struggle to make it every day. Even Los Angeles isn’t as kind as I thought it would be – but those are the choices I made, and I’m living with it now. I just don’t like to take shit from people anymore.”