Modern Alchemy: The Combustible Life and Times of Richard Lloyd 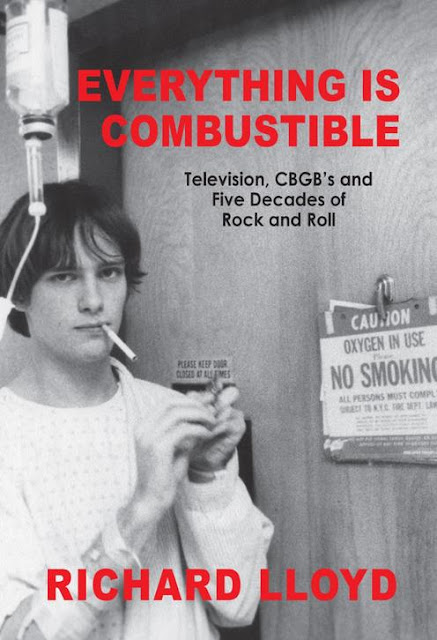 Richard Lloyd is one of my favorite people to interview.

Easily one of the most fascinating conversationalists I’ve ever encountered, the singer/guitarist/producer/philosopher has had the kind of life that just begs for a memoir. Finally, fans of Lloyd’s extensive body of work (from his 1973-2007 membership in the legendary Television to sterling solo releases like 1979’s Alchemy and 1986’s Field of Fire) have the chance to experience his unique history and world view for themselves through his recently released book, Everything Is Combustible: Television, CBGB’s and Five Decades of Rock and Roll.

Similar to a phone call with Lloyd himself, Everything Is Combustible is a free-flowing narrative that feels like a chat with a worldly old friend – the result of his use of voice-recognition software to compose the pages.

“The biggest-selling book on Punk is Please Kill Me, which is a bunch of people in conversation with [co-author] Legs [McNeil],” Lloyd explains. “This is like that book in terms of it being a conversation, only it’s just with one person. You only get to write one memoir, so it covers pretty much my whole life.”

Although Everything Is Combustible presents nearly 400 pages’ worth of Lloyd’s experiences, the book’s overall feel allows the readers to explore it in small – and even random – doses.

“The chapters are short. You can open the book anywhere and get something interesting out of it. You don’t have to read it from beginning to end, although that’s the preferable method and what I’m going to do on the audio book.”

Perhaps the most interesting thing about Everything Is Combustible is that it’s much more than a “Rock” book written by a guitarist. I won’t give away spoilers here except to say that readers should be prepared to gain insight into a truly esoteric mind. Lloyd likens the book’s goals to those of the Carl Jung tome Memories, Dreams, Reflections.

“[That book] talks more about his inner life than it does his outer life. I wanted a memoir that would do that – look at myself and my internal structure as well as look at the outside and the events around me. I think I did a pretty good job of that. There are some people who are looking to find a book about CBGB’s and Television exclusively, but you only get one chance to a write a book like this.”

A flip through the pages of Everything Is Combustible reveals a guy with a tremendous knack for being at the right place at the right time – and with the right people. Lloyd was a witness of/participant in some of the most pivotal moments in music history – and amassed an overwhelming cast of characters in his travels as a result. Woodstock? There. The Fillmore East? There. CBGB’s? He built the stage (literally). Hendrix? Knew him. John Lee Hooker? You bet. Name an important Rock icon of the past 50 years…There’s a very strong chance they pop up somewhere in this book. For the author, it was more important to be around these people to “get a handle on whatever pizzazz they might have” than it was to be a mere fanboy.

“I was more interested in being close to them than being friends with them. When you’re young, a year can make a big difference – like being a senior in high school and then you talk to the [college] freshman. I was a 16, 17, 18-year-old kid, and these people were in their late 20s. It was important to me not to try to befriend them, but to be quiet in a way.”

In 1973, Lloyd began his journey towards becoming a musical inspiration in his own right with the formation of Television, who soon built a name for themselves at what would become one of the most celebrated venues in the world.

“There was basically no place to play. Then, we found CBGB’s on the Bowery, and it was a dump. What we wanted was a dump that no one else would want to take from us, and we could be the house band. We didn’t even know there were all these bands sort of waiting in the wings for a place to play original music. They all had to go to CB’s because there was no place else to play that would accept them. CB’s would accept almost anything, although there were some bands that played once and never played again and weren’t invited back. And there were bands - like The Ramones -who came in about six months after and immediately got put in the rotunda [with] Talking Heads, Television, Blondie and the rest.”

The effect these and other CBGB’s-era groups have had on the world is still palpable 40-plus years later – although Lloyd is very quick to question the use of the word “Punk” to describe their sonic output.

“The scene itself made a mark on Rock ‘n’ Roll history that can’t be denied. Kids are still wearing Punk-type clothing. It wasn’t ‘Punk’ until Punk Magazine came along. The journalists didn’t know what to call us; they called ‘New Wave.’ Then Punk Magazine came along, and a couple of bands bought into that, especially The Ramones and The Dead Boys. Everything got labeled ‘Punk” because it’s simple; it’s four letters, and it’s easy. Blondie’s not Punk, Television is not Punk and Talking Heads is not Punk. They’re completely different world views. None of our stuff was political, which is the difference between American Punk and English Punk, which was all about that – the class struggle and politics. With New York stuff… I mean, Americans doesn’t give a rat’s ass about that.”

Naturally, compiling the thoughts, memories and reflections that comprise Everything Is Combustible was a years-long process.

“I looked for co-writers or editors, and everybody I went to said, ‘Well, you’ve got a great writing style; you should just do the book yourself.’ With that and my ability to procrastinate, it took me about a decade. Also, I couldn’t really release it until I was out of Television, because I knew I was going to have to tell the truth – and it would upset somebody.” (laughs)

That “somebody” is Television singer/guitarist Tom Verlaine. Unsurprisingly, a fair amount of the music-oriented content in Everything Is Combustible explores Lloyd’s fractious relationship with his musical cohort. While the two unquestionably created magic together on stage and in the studio, a read through the book makes it clear that other facets of their union were not as enjoyable. Now that his book is published and he’s been out of Television for a solid decade, how does Lloyd characterize his current dealings with Verlaine and Co.?

“I have great relationships with [bassist] Fred [Smith] and [drummer] Billy [Ficca]. I haven’t talked to Tom in ages, so I don’t know where that stands. I like him as a friend; he could be one of the funniest people I know. In fact, sometimes he used humor to change the subject from something serious – like record royalties, etcetera. He’ll just start making jokes. That part is not so pleasant, but I love the guy. I spent 35 years with him, so what’s to say? It’s just a marriage that came to an end.”

Verlaine recently grabbed headlines – and received a fair amount of criticism – when he was recorded telling an audience member that he’d “chop [her] head off” if she didn’t stop video recording his live performance. Lloyd calls these antics “pathetic” while encouraging his audience to take all the video and photos at his shows as they want.

“I’m fine with it. Please, get it out there! I would hope the recordings are worthy in terms of sound quality, but I’m happy when people record me. When people put cell phones in the air and take pictures, that’s delightful.”

When I last spoke with Lloyd in 2011, he was gearing up for the release of Barfly, his second album with reactivated early ’70s-era Cleveland cult heroes Rocket From The Tombs (RFTT). While the album ultimately proved to be another stellar addition to the RFTT canon, the band (fronted by Pere Ubu’s David Thomas and featuring Dead Boys legend Cheetah Chrome on guitar) parted ways with Lloyd shortly after its release.

“Mr. Crocus Behemoth – otherwise known as David Thomas – is as much a control freak as Verlaine. Finally, we were fed up; Cheetah left, and then I was dropped or left. I wouldn’t have stayed anyway without Cheetah. To me, playing with Cheetah was as interesting as me and Tom, but much more Hard Rock. Very, very interesting. In fact, we were talking about doing something together late next year.”

In addition to this possible collaboration with Chrome, Lloyd is working on a new solo album – the follow-up to last year’s stellar Rosedale – and plans to soon record an audio version of Everything Is Combustible. In the meantime, the book will arrive on Kindle on January 30 with a softcover edition to follow.

Away from music, Lloyd has spent recent times selling original art pieces through the Richard Lloyd Painting Page on Facebook.

“About three years ago, I started painting again. I’ve been painting since I was a child. I have synesthesia, so music is colors and colors are musical. My paintings generally have a lot of colors in them, although some have a share of black and white, but that’s another color. I don’t much like earth tones… I don’t like browns. They’re always a mess!”

While some might be tempted to write a memoir when they feel much of their life’s work is in the rearview mirror, Richard Lloyd published his at a time when he is still very much committed to working, creating and exploring. Everything Is Combustible is a beautiful tale, but it’s also indicative of a life that is still unfolding in extraordinary ways. Richard Lloyd’s future is unwritten, but it’s sure to be an intriguing and adventurous ride.

“Maybe I’ll write a book called Everything Is Ashes when I’m 90!”

Richard Lloyd performs this Friday at ONCE Ballroom in Somerville, MA with The Dream Syndicate. Tickets are available HERE.