The Real Shit: In the Septic Tank with Scott Carlson 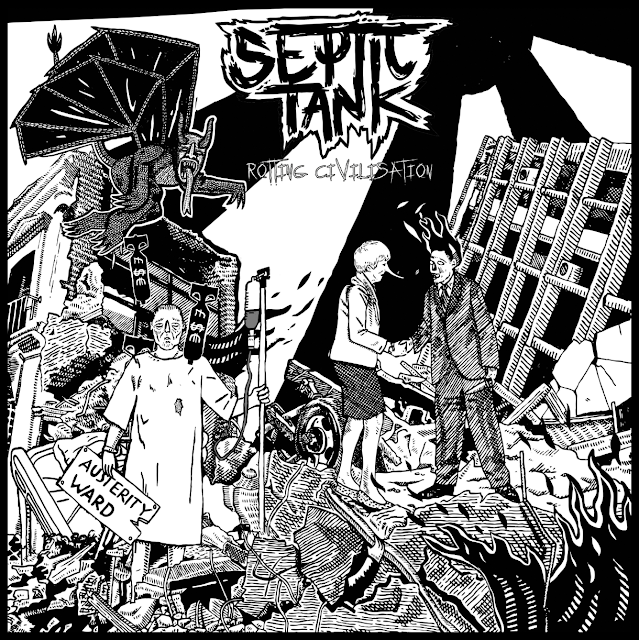 “Shit out your soul/Day by day/Accepting lies they throw your way…”
-  Septic Tank, “Septic Tank”

When the band is called Septic Tank, the album is called Rotting Civilisation and the Stewart Easton cover art looks like what see above, it’s a pretty safe bet you’re not getting a Pop record.

Formed way to back in 1994 as an occasional side project for various then-members of UK Doom Metal legends Cathedral, Septic Tank is a band focused on celebrating and following the tradition of raw sonic intensity first established by old school Hardcore/Punk bands like Discharge and Siege. Originally featuring the late Barry Stern (Trouble/Zoetrope/Cathedral) on drums, Septic Tank currently features vocalist Lee Dorrian (Napalm Death/Cathedral/With The Dead), guitarist Gaz Jennings (Cathedral/Acid Reign/Lucifer/Death Penalty), bassist Scott Carlson (Repulsion/Cathedral/Death) and drummer/producer Jaime ‘Gomez’ Arellano (Cathedral/Ghost/Paradise Lost/Ulver/Electric Wizard). The long-awaited follow-up to the band’s self-titled 2013 EP, Rotting Civilisation features 18 blistering tracks of distorted rage that demonstrate Dorrian’s most savage vocal performance since Napalm Death’s From Enslavement To Obliteration. Fans of that classic Napalm record, Carlson’s work on Repulsion’s immortal Horrified and the heaviest moments of early ’80s Hardcore now have a new soundtrack to listen to while punching holes through the wall. Rotting Civilisation is the real thing delivered by true underground music vets who know what this kind of noise is supposed to sound like.

I recently touched base with Scott Carlson to discuss Septic Tank’s ongoing journey of brutality, Discharge and the enduring power of extreme music.

This new Septic Tank album on Rise Above Records is the first one you’ve done in five years, and of course the last one was an EP and not a full-length. This whole Septic Tank thing has been around for decades at this point. Why was now the best time to finally come together and do a full-length record?

It was really just a matter of convenience. I was actually going over to England to check out the last Black Sabbath shows with Lee and Gaz, who were also in Cathedral and are huge Sabbath fans like me. We were planning to do that, and then Lee said, ‘Hey, while you’re here, why don’t we just knock out a Septic Tank record?’ We’d been sort of working on the tunes on and off; I had a bunch of stuff written, and Gaz had a bunch of stuff written. We just got together and knocked out the music portion of it real quick.


You have a history with Lee and Gaz through Cathedral, and this music is much different from what you guys had done under that banner. Musical styles aside, is there any difference between working with those two guys in Septic Tank and working with them in Cathedral?

Not really. We all sort of have a similar vision, and we work really well together. Gaz and I work really well together when we’re just like banging riffs off of each other, so that part of it works out really well in either setting. We don’t really butt heads too much about anything; it just kind of all flows really well. It’s a pretty great relationship. It’s a pretty similar approach, although the Cathedral stuff had much more thought put into it. We’re going more on feel with the Septic Tank stuff. A lot of the songs were written rather quickly. We’d come up with a cool riff and then just knock together an arrangement and try to capture it while it’s still raw.

There’s obviously a very strong Discharge vibe on this record, and I’d imagine they’re a huge influence on you guys. What was your first introduction to Discharge, and how has that band influenced you over the years?

I heard [Discharge’s 1982 album] Hear Nothing See Nothing Say Nothing not long after it was released. I think I was standing in line at a Venom gig or something, and I had on a GBH t-shirt. The guy next to me was like, ‘Do you like Discharge?’ I was like, ‘Never heard of them.’ He was like, ‘If you like GBH, they’re even more intense.’ With the way he described it, I was like, ‘Oh, I've gotta have that!’ I ran out and bought it immediately. It blew my fucking head off at the time; it was just so nihilistic and heavy, and the imagery was so strong. It immediately struck a chord with me that never faded.

I interviewed Lee last year, so I know he always has a full plate. With that said, where do you see Septic Tank going in terms of possible touring or more music beyond this point?

Maybe not tour, but we’re definitely going to play. We’re in talks right now to go to Japan, and I’m sure some other stuff will come up. It’s just a matter of time. Once the album gets out there and people are aware that it’s a band, we’re sure more gigs will pop up. But I don’t realty see us going on a full-blown tour – probably just some minor stuff here and there. There will be more music for sure. The record was so much fun to make and came together so easily that I’m sure we’ll do another one.

I want to discuss something that came up when I talked to Lee. There was a short-lived time in the ’90s when a lot of extreme Metal bands – like Godflesh, Napalm Death and of course Cathedral – ended up going through the major label filter. Because you came up musically before that happened, what are your thoughts on that particular major label era when you look back at that now? Did you see that having any impact – either positively or negatively – on the genre and its history?

I don’t think it was negative in any way. I actually came aboard Cathedral right at that time. The Soul Sacrifice EP [1992] had been released on Columbia, and The Ethereal Mirror [1993] wasn’t out yet. They were just starting to do press for it, and I met with them in New York, went back to England with them and started jamming. I was there from the beginning of the whole major label thing, and I’m glad it happened. It was an interesting and educational experience to be on a major label at that time in the early ’90s and see how big the operation was. It was amazing.

Photo shoots cost $10,000, and there were $50,000 videos. Just a lunch to talk about the photo shoot had like 15, 20 people at a super-expensive restaurant! The stereotypical excessive behavior of these labels was ridiculous. The amount of money they wasted on just shit that was going nowhere…There were a handful of people who knew what they were doing and understood the music and knew exactly what it was. In fact, the people who signed all of the Earache [Records] bands to Columbia were actually very smart people who were totally in touch with the scene and everything. These guys knew what they were doing, but the people above them had no idea what was going on. The executives were just throwing money around and ordering photo shoots and stuff that was just absolutely ridiculous.

Aside from Septic Tank, what are you up to musically these days?

I play in a Rock band in Los Angeles called The Superbees, and then there’s just various things. Repulsion still plays gigs here and then, and I still write stuff all the time at home. I have lots of instruments and amplifiers at my house, and I’m always messing around with stuff. I made a record with Church of Misery last year or the year before. I’ve always had my hand in something, and I’m keeping myself busy - plus I work at a major studio in Los Angeles. Between work and all the little side projects I do, I’m way too busy most of the time. (laughs) 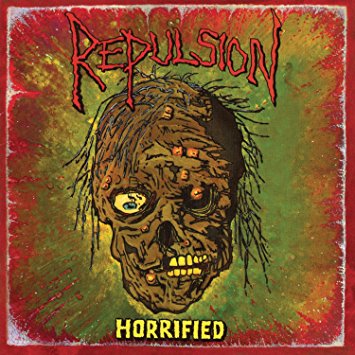 You’ve been playing extreme music for a long time – well over 30 years at this point. For you, what is it about playing music with that level of intensity that still keeps you in the game and still looking to go in that direction?

I think it’s just fun. That sort of never leaves you once you’ve done it. The opportunities keep arising, and the people who are involved are my friends and great people. If something comes along like, say, Tatsu [Mikami] from Church of Misery wants me to sing on the new record, why would I turn that down? The guy’s a brilliant musician; I would love to work with him. Working with Lee and Gaz? Anytime. I love those guys; we’re like brothers. It’s a shame that Cathedral isn’t around anymore, but those guys just felt that it reached its logical conclusion. It’s cool to be able to work with them in another [band]. In fact, we’ll probably have more fun with the Septic Tank thing because it’s a little more unbridled. (laughs) One thing I will say is that Cathedral didn’t really have any rules; there was a lot of experimentation going on. With Septic Tank, we sort of have a theme and an idea that we’re going with that all comes together really quickly, and it’s lots of fun. That’s sort of what keeps me coming back to it, I guess. I find it to be fun. Even playing Repulsion gigs – where we haven’t written a new song in forever – when we go on stage and play those old songs, it’s like it’s 1985 or 1986 again. We’re just having a blast!

Septic Tank at Rise Above Records