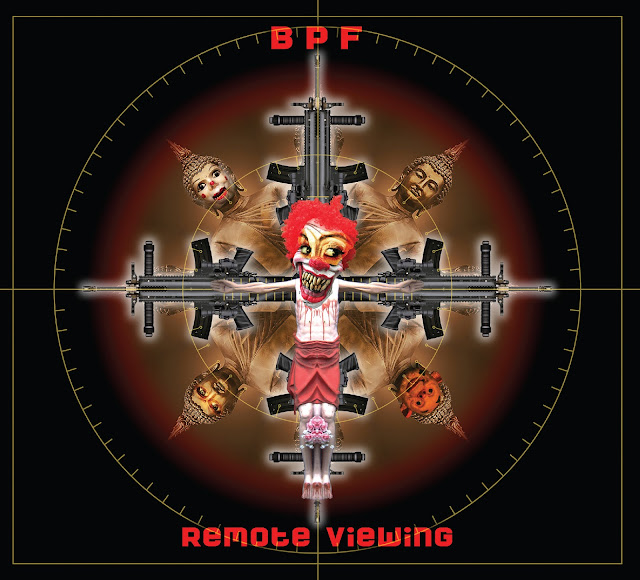 From his humble beginnings on vinyl backing up Reggae singer Mataya Clifford (a.k.a. Mat Stagger) to his career-defining work with the incendiary Killing Joke, Big Paul Ferguson has always brought a unique vision to the world of drumming. His tom-centric performances on classic Joke albums (particularly 1981’s What’s THIS For...! and 1983’s Fire Dances) introduced a new standard for percussive expression that has since been regularly emulated but never surpassed. (Master skin basher Martin Atkins, who served as Ferguson’s replacement in Killing Joke in the late ’80s/early ’90s, has quipped on more than one occasion that copying Big Paul’s patterns nearly killed him.) In addition to various releases by the mighty Joke, Ferguson’s magic can be heard and felt on recordings by a slew of acts including Warrior Soul, Crush, The Ancients, Pigface, Transmission (with Killing Joke bassist Youth) and the early-’90s Killing Joke offshoot Murder Inc. Now, he has released his first music on his own (under the abbreviated moniker BPF) in the form of the stellar Remote Viewing, a seven-song EP featuring instantly identifiable cover art by longtime Killing Joke collaborator Mike Coles.

Naturally, it takes mere seconds into the opening “Hungry Gods” to know exactly who’s supplying the beat. Bolstered by the addition of hand percussion to his usual sonic arsenal, Ferguson flavors the track with a spoken word piece delivered in a fashion not unlike his one-time Murder Inc. collaborator Chris Connelly. Seventy-five seconds in, the drums rise to meet the fiery guitars of underground veteran Mark Gemini Thwaite (The Mission/Peter Murphy/Tricky), whose presence is felt throughout the EP. The track fulfills everything the words Big Paul solo release promise.

With Thwaite adding dark menace behind the curtain, the drums unsurprisingly take center stage on the Techno-tinged “Reboot,” a song that demonstrates the trance-like power that can be accomplished when a simple, bulletproof groove and a relatively mellow vocal track are placed in the right hands. (You can practically feel the osmosis effect of longtime associates Youth and Alex Paterson [The Orb] flow out of Ferguson’s pores on this one.) A similarly simple (but equally effective) beat drives the EP’s greatest moment, “Fear The Great Motivator.” While Ferguson is best known for his tribal drive, sometimes his strongest statements come when he sits back and lets a minimalistic vibe take over. (For another prime example, check out “The Rain” off Crush’s criminally overlooked eponymous album from ’93.) The drums here (and throughout the EP, for that matter) are powerful but never gratuitous, thus brilliantly showcasing the skills of a player devoted to serving the songs and establishing a mood through rhythm instead of resorting to histrionics.

Lyrically, Ferguson has plenty to say. Perhaps the most pointed sonic criticism of modern culture since Nicole Blackman gave the world a vitriolic verbal smackdown on KMFDM’s “Dogma,”  “XBOX” (featuring electric violin courtesy of Niklas Rundquist [The Leather Nun/Brainshadow]) hurls plenty of savage chestnuts at the deserving masses. Here’s one of them:

Ayn Rand was an evil bitch with a bad idea
But she is the prophet of the West
And they won’t stop until her dreams become a reality.

There’s plenty more about Remote Viewing that could be discussed here, but this EP – much like the band Ferguson calls home – is something you need to feel to fully appreciate. At 60, he has just unveiled one of his most fascinating works. Like the brightest moments in his musical past, Remote Viewing will provide new treasures to listeners years after their introduction to it. An essential addition to the discography of one of underground music’s most innovative minds.