Words from “the Other Side:” Bob Daisley Opens Up About Ozzy 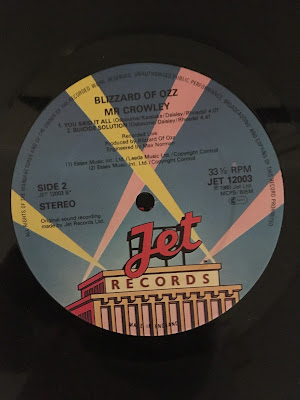 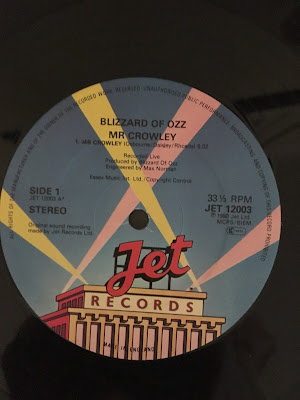 The photos above (courtesy of Bob Daisley) are of the "Mr. Crowley" single by the band Blizzard of Ozz, released by Jet Records in 1980. These images contradict the common misconception that Blizzard of Ozz was just the name of Ozzy Osbourne's first "solo" album.  The lineup of Blizzard of Ozz - the band - was Osbourne, Bob Daisley, Randy Rhoads and Lee Kerslake.


On August 23, Ozzy Osbourne announced the November 29 release of See You on the Other Side, a vinyl box set comprised of his 16 post-Black Sabbath albums, B-sides and more. This was news to veteran Rock/Metal bassist and songwriter Bob Daisley, who performed on – and wrote/co-wrote the lyrics/music for – a good portion of the material contained in the upcoming release. Daisley’s tumultuous history with Ozzy and Sharon Osbourne has made headlines for years (and has been featured extensively on this website). With the impending release of another collection featuring Daisley’s work, I reached out to him at his home in Sydney, Australia for his thoughts on See You on the Other Side, some of the other key players from his time with Ozzy and if he believes his differences with his former collaborator could ever be resolved. (Author’s Note: The day after the below interview was posted, a press representative for Ozzy Osbourne confirmed in an email to me that the original recordings of Blizzard of Ozz and Diary of a Madman will be included in the upcoming box set.)

So, there’s a new Ozzy box set coming out. Are you generally made aware when these sorts of things come out?

No. Why would anyone bother telling me? (laughs) I’m only one of the writers and performers. (laughs)

You’ve seen the press release about it, and the box set has already received some press. Based on what you’ve seen, what are your thoughts on what’s about to come out?

The first thing that came to mind for me was what versions of the first two albums will be in it. We know that the drums and bass were re-recorded, and that was all that was available for a while. Hopefully, for the fans and the posterity of the music, it will be the original real versions.

Absolutely. I can tell you there has been no information sent to me that indicates which versions they will be.

I wouldn’t know. I think most people know about what I’ve termed ‘The Holy Grail,’ which are my recordings from those writing sessions and rehearsals and pre-production sessions before those albums were even recorded. It would have been great stuff to go on a box set as bonus material. We tried once before; my manager contacted the necessary people, but they just wanted me to hand it over for a flat fee, which would mean total control for them and an opportunity to rewrite history yet again, so I said, ‘No way!’

It’s reasonable enough for you to ask for something.

Sure. They’re my recordings, and it’s me on them. It’s my writing, and it’s my performances – as well as Lee Kerslake’s, Randy Rhoads’ and Ozzy’s.

When they’ve pertained to Ozzy, a lot of our past conversations have been about the first two albums. With this new box set coming out that features all the Ozzy albums, I thought this would be a nice opportunity to talk about the music you were involved in with him after Blizzard of Ozz and Diary of a Madman. Specifically, Bark at the Moon was an important record for all of you –

Bark at the Moon was a real milestone, because nobody knew what was going to happen. Don’t forget, by 1983, Randy was gone, Lee Kerslake was no longer in the band and there were only two original members of The Blizzard of Ozz. Nobody – the record company, management – knew how that third album was going to be received. It could have flopped; people may have thought, ‘Well, Randy’s not on it. It’s not the original band.’ It was almost kind of experimental. Fortunately, it turned out really well. I love that album; it’s a great album. I’m proud of it, because we put a lot into it.

I know Jake E. Lee said that he wrote songs for that. He brought riffs to the table. I remember when we were in New York writing for Bark at the Moon; on the last night in the hotel, I said to Jake that he fitted Randy’s shoes admirably. He did a great job. He played all of Randy’s guitar parts very well, but he also put his own stamp on them as well. I was really pleased with how it was all shaping up. I said, ‘Jake, you’ve brought in some great ideas.’ He said, ‘Yeah, but you turn them into songs.’ I know Jake may have forgotten that (laughs), but I remember that very well.

I liked working with Jake; we got on well. He was a first-class musician. I thought he was brilliant.

The good thing about working with Jake after Randy was that he wasn’t trying to be Randy. He had his own thing. He was Jake E. Lee. He had the Jake E. Lee style and the Jake E. Lee presentation and stamp on everything. It wasn’t about re-creating what we had done in the past, and that was great.

I got on great with Zakk as well. He was a good guy. We’d go out for meals together and have a good laugh. He was quite young; I think he was like 21 or something when he first joined the band. I think that was in ’87. He still had to follow Jake E. Lee, who was not an easy act to follow. But Zakk did well personality-wise, and he had great riffs and song ideas, too.

Ozzy has put out several albums since you walked away for good. Have you listened to his albums since that time?

Yeah, there’s still some good stuff. I read and listen to a lot of the comments from fans regarding that. There are certain songs that people like, but there seems to be a common denominator that things aren’t what they used to be. It’s hard to see the forest for the trees or look out from the eye of the hurricane, if you know what I mean, so I haven’t really formed an opinion. If you’re part of it yourself, it’s not always easy to judge that sort of stuff. But just by going on what other people think and what I’ve seen written on forums and websites, people tend to think that some of the later albums aren’t as good. I haven’t listened to all of it, but I have heard some stuff.

That’s because Lee’s dying of cancer. Lee wrote to Ozzy and Sharon and said, ‘Look, I’m dying. I’ve got limited time. Would it be alright if I could at least get my albums?’ He never had one – not one! Not a silver, not a gold or platinum – for any of them! I thought that was just a travesty. Mind you, I’ve never received the ‘four platinum’ award for Diary and the ‘five platinum’ award for Blizzard either, but I got the single platinum and golds when I went back to do Bark at the Moon.

Here’s a question that I’ve seen a lot fans post online: With all the things you went through with the Osbournes, why did you keep going back to work with them?

There’s a complicated answer to that simple question. To get the full picture of the full story, you would have to read my book, For Facts Sake, because it’s in there. The answer is quite involved; it’s not a simple sentence or simple paragraph. It was quite complicated, and you need to read the progression of what happened and how it happened and why I went back several times. I could sit here for probably three quarters of an hour and tell you the whole story of how it unfolded, but it would be a lot easier – and in detail – to read it in my book.

Sharon’s name has come up a lot in our conversations over the years, but you were in the band with Ozzy – not her. With that said, what would the chances be of some or all of your issues being sorted out if you and Ozzy sat in a room – without Sharon, the lawyers, the managers – and just talked? Do you think that would ever be a possibility?

I would never say it is not a possibility, because anything can happen. Ozzy and I always got on well together. We had a similar sense of humor, and we had similar tastes in music. We got on like a house on fire. I still remember his very words the first time I went to his house in Stafford. We had a play together, and he had a couple of other people there – this was before the Randy days. This is when he had another guitarist and drummer there. I can’t remember their names or where they came from, but Ozzy knew them well and was talking about putting this band together with them. Ozzy had left Black Sabbath for a brief time in 1977, and he was going to have another band then, but it didn’t last and he went back to Black Sabbath. These guys could have been from that band, which was also going to be called The Blizzard of Ozz. He even had t-shirts made; I’ve seen photos of them.

I was sitting in the kitchen with Ozzy, and I said, ‘Look, these guys are okay. But to be honest with you, they’re not great. They’re not world-class.’ He said, ‘Hang on a minute.’ He opened the rehearsal room – which was an integral part of the house – and said, ‘Alright, fellas. You can pack up and go home. It’s not working out.’ It was just like that, just because I said that. When he came back, he said, ‘I know this other guitarist in LA. He’s good; he might work out. His name’s Randy Rhoads.’ I just said to Ozzy, ‘Well, let’s get him over.’ So, The Blizzard of Ozz really started with just Ozzy and me. Then, we got Randy over and started auditioning drummers.

I remember when Ozzy phoned the office at Jet Records and spoke to a guy there called Arthur Sharp. Ozzy said, ‘Me and Bob get on like a house on fire. The fire brigade’s just left.’ It was true; we got on great. Personally, there was never a problem between Ozzy and me. We always had a good laugh, we were productive and came up with good ideas. It was just the business side of things and all the logistics that got in the way.

If a reconciliation was ever a possibility, it could have happened before now. If it happened tomorrow, it would be great, but it’s a shame it couldn’t have happened somewhere along the way without all the other bollocks that went on.