Frankie Banali has done the impossible.

A decade ago, the Los Angeles-based drummer and music industry veteran announced that he was resurrecting Quiet Riot – the band he had been an integral part of since 1982 – without legendary frontman Kevin DuBrow, who died in 2007. There he was, a guy nearing 60, attempting to bring back a band already decades removed from massive fame and chart success. It was one hell of a gamble. Would he embarrass himself by giving it another go amidst a scoffing industry and a skeptical fanbase? Not surprisingly, the journey was rocky: A procession of lead singers came and went, reviews were mixed and even fellow Metal staple Dee Snider went on record in the 2015 documentary Quiet Riot: Well Now You’re Here, There’s No Way Back as saying that he didn’t see a future for Banali’s plan. But the timekeeper doggedly followed his convictions, eventually building the Quiet Riot band/brand back up to international status and acclaim.

While still keeping a heritage act alive and relevant in 2020 is a colossal feat, the fact that Banali and his current cohorts recently unleashed one of the greatest albums ever born under the Quiet Riot banner is the true victory. Released last November on Frontiers Records and the follow-up to 2017’s Road Rage, Hollywood Cowboys is the band’s second album to feature singer and former American Idol finalist James Durbin. While Road Rage offered some exciting hints of the Banali-led Quiet Riot’s strengths, the new album easily surpasses its predecessor thanks to instantly apparent boosts in songwriting and musicianship. If fact, album opener “Don’t Call It Love” showcases some of the finest drumming of Banali’s storied career. The song is the first of four consecutive album tracks co-written by singer/songwriter Jacob Bunton alongside Banali and longtime Quiet Riot engineer/writing partner Neil Citron.

“[Neil] and I started working on the music two years ago,” Banali explains. “We worked on these songs for about a year and narrowed it down to the songs that ended up on the record. To me, some of the key songs on the record were ‘Don’t Call It Love,’ ‘In the Blood,’ ‘Heartbreak City’ and ‘The Devil That You Know,’ which is why those are the first four tracks.”


Additional contributors to Hollywood Cowboys include former Anthrax frontman Neil Turbin (who supplied lyrics and background vocals to “Change or Die” and “Insanity”) and lyricist August Young. Citron provided extra instrumentation to “Roll On” and “Change or Die.”

Considering that Banali produced the album himself, it’s no surprise that the drums hit the listener over the head with intensity throughout the proceedings.

“I went into the studio and recorded the drums with Neil [Citron] on analog using two-inch tape. It has a much bigger and warmer sound, I think, than when you record drums digitally. Even though we had to transfer it to digital in order to do the rest of the recordings and the overdubs, it has a very unique sound.”

With Durbin (who joined Quiet Riot in 2017) ending his run in the band prior to Hollywood Cowboys’ release, Banali has brought back Jizzy Pearl (Ratt, Love/Hate, L.A. Guns), who previously worked with the band from 2013 to 2016, to front the ever-resilient machine as it steamrolls into 2020.

“We had almost three great years in the past with Jizzy. I really like him; he’s his own person, and he’s very quirky. He’s an incredible singer in his own right. He has his own style. He’s not trying to copy Kevin DuBrow, but he does justice to the Quiet Riot material and legacy while at the same time making it his own, which for me is very rewarding. He’s an incredible live performer, and he was a great fit for the time he was with us. So, when I found myself in need of a new vocalist, rather than reach out to a couple of people who I had in mind who had no previous connection to Quiet Riot, I wanted to see if there was a possibility of him returning to the band. I was very happy that he wanted to be involved again; it’s a win-win situation for me.”

Despite frequent shifts in the singer department, the post-DuBrow Quiet Riot has soldiered on thanks in large part to the sonic foundation laid by Banali, bassist Chuck Wright (whose sporadically history with the band dates back to the early ’80s) and long-serving guitarist Alex Grossi.

“I was very conscious of the fact that the last touring lineup that Quiet Riot had [with Kevin] was with Alex on guitar and Chuck on bass. That was Kevin’s favorite lineup, because it was a lineup that functioned well live and as people. Alex and Chuck were the first people I reached out to. I have an incredibly great relationship with [former bassist] Rudy Sarzo. He’s one of the biggest supporters of Quiet Riot and of me personally. But he has his own things going on, so that was not a consideration at the time. I wanted to respect what Kevin felt about that particular lineup, and I was very happy that they wanted to come on board as well.”

“We were really, really fortunate to have been at the right place at the right time, having written the right songs and having had the opportunity to have a Slade song become a worldwide hit for Quiet Riot. It was a combination of being at the right place, being at the right time, having the right lineup, having a great record and having MTV be a huge part of promoting us. All of those stars aligned themselves to make it possible for us not only to be a different sound, but to be able to have a Number One album on Billboard, which was unheard of. I still love the fact that we were able to do that and were afforded that opportunity.” 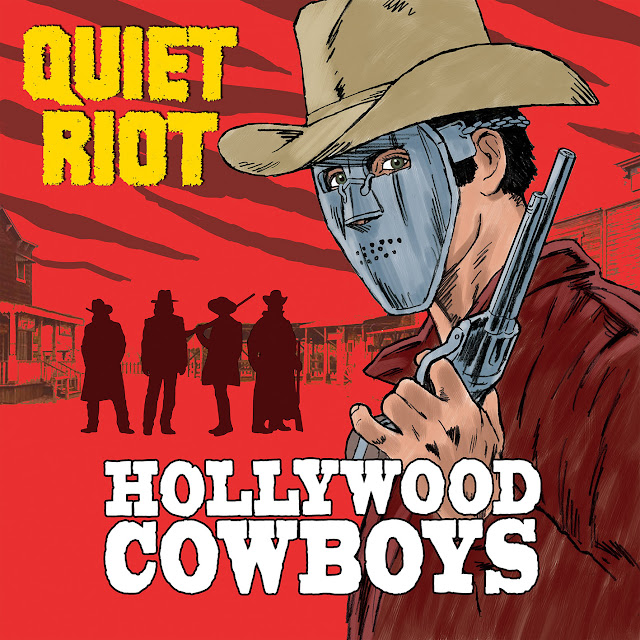 Through Banali’s determination and Grossi and Wright’s unwavering presence, Quiet Riot has been afforded a new opportunity to succeed in the present tense. After keeping the fire burning a full decade without DuBrow, Banali insists that the band still has much more to do.

“What I would like to accomplish is have Quiet Riot continue to record and create new music, even though the music industry is not what it was and most of the recordings are stolen. Streams mean nothing to me; what means a lot to me is the fans’ support for the new material as much as they supported the previous records that have come out. When you write and record new music and release it, it’s like getting a shot in the arm. I’m incredibly proud of Quiet Riot’s history and the music we’ve created, but a musician is not a musician if all they do is just play the same thing they’ve always played. I understand that the fans want to hear those songs, and I’m more than happy to play them because I love all the Quiet Riot songs. But it’s important to me as a musician to continue to write new music regardless of whether the critics like it or not.”

Sadly, the release of Hollywood Cowboys is bittersweet for Quiet Riot fans and band members alike. Just as the group finished recording the album in April 2019, Banali was diagnosed with stage four pancreatic cancer. Although he kept the news private for several months, a series of Quiet Riot live performances featuring fill-in drummers Johnny Kelly (Type O Negative/Danzig) and Mike Dupke (W.A.S.P.) raised more than a few eyebrows and concerns. On October 21 – only three days after promo copies of Hollywood Cowboys were sent to the music press – Banali made his condition known to the world. Since then, he has kept fans updated on his chemotherapy via Quiet Riot’s official Facebook page.

“Thank you to all the fans and all my friends for the incredible amount of support and love that they have afforded me once I went public with my situation. Know that it does make a difference. Know that your comments, your prayers and your kind words are not ignored. They absolutely mean a lot to me, and they make it possible for me to move forward with my fight.”

While it is true that Banali is beginning the new year with serious questions about his health and future, the powerhouse that is Hollywood Cowboys proves that Quiet Riot is still a legitimate force in the world of music. If there’s one thing fans have learned from Quiet Riot since 2010, it’s that we should never expect the man keeping the beat to simply accept defeat and ride off into the sunshine quietly.

“Quiet Riot has been a huge part of both my personal and professional life for 36 years since [Metal Health] came out, but even longer than that. I started working with Kevin in 1980 [under the band name DuBrow]. Again, if it wasn’t for the fans’ support, Quiet Riot would not exist. I love the legacy of Quiet Riot, but I also love the fact that the real fans continue to support us by coming to the shows and buying new releases. For me, that’s gratifying. I’m the only member of Quiet Riot who’s played on every single album since Metal Health. I had three years without Quiet Riot after Kevin passed away, and my decision to bring Quiet Riot back had everything to do with two factors. One was the fact that I wanted to see if the fans still loved the band and would support it even if dear Kevin was gone. Two, I couldn’t see myself not playing Quiet Riot songs for the rest of my life. I took a chance, and I rolled the dice. Even though the dice came back as snake eyes a lot of times, I’m not a person you can say ‘no’ to or you can tell, ‘This is not going to work.’ I just go by my gut instincts, and I keep moving forward.”