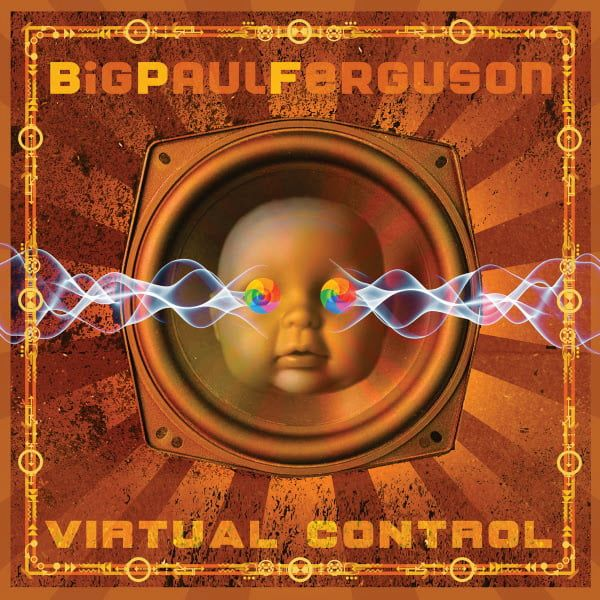 “Let’s hope Killing Joke is locked away in a bunker somewhere writing an album about all of this.”

I posted the above words on my personal Facebook page last year during the early days of the COVID-19 pandemic. I could not think of a more suitable band to express the anger, fear, isolation, confusion and grasps at hope that millions suddenly had to experience in the blink of an eye. Although a new Killing Joke studio album has yet to materialize (perhaps with the wildly disparate locations of the band’s members serving as the greatest culprit), listeners will soon have Virtual Control, the upcoming first full-length solo album by the group’s co-founder and drummer, Big Paul Ferguson.
Ferguson the man is soft-spoken, warm and welcoming – the kind of person who’d sooner greet a fan (or “Gatherer,” to use Killing Joke parlance) with a hug than with a handshake. Ferguson the drummer, however, is as terrifying as he is inspiring – the primal emotional engine fueling Killing Joke’s sonic storm through precise tom-heavy beats and a piercing, laser-focused onstage gaze that could cut through glass.
This duality is on full display throughout Virtual Control, which unpacks a hell of a lot in regard to our current state of world affairs through the juxtaposition of thunderous instrumentation and even-keeled, half-sung/half-spoken vocals. The album’s title alone should give you an idea of Ferguson’s present worldview as he comments on what has largely become a society manipulated into devolving into the human equivalent of rattled canines barking at one another in a circle. (As he sings on the album’s opening track, “Lapdogs of discontent never agree.”) Visually speaking, he addresses the pandemic in blunt fashion in the new video for the album’s first single, “Extrapolate.”
Lyrically, Ferguson’s primary interest on Virtual Control seems less focused on the pandemic itself and more targeted toward the societal and global implications of the cultural shifts it has produced, as demonstrated in these words heard underneath the loudly mixed musical blast of “Data Lama:”
Hard to imagine what the future’s gonna look like
When the structures we’ve been used to
Have all been swept aside
Barriers of normalcy
Barriers of trade
Have all been blown to pieces
By this fundamental change.
Of course, America (where Ferguson currently resides) recently faced racial unrest and a deeply polarizing Presidential election in addition to the lockdown conditions that shuttered the planet. This already combustible combination was made even worse by the proliferation of dubious information by sources driven more by the desire for clicks than the commitment to presenting anything resembling reality. These developments drive the slow burn of “The Unraveling,” a melancholic meditation on a citizenry rapidly succumbing to the seductive glare of portable screens:
Swipe left, swipe right
Scroll up, scroll down
Click here, click there
Watch the little wheel spin round
And round and round and round
Shopping online
Swallowing lies
Victims of circumstance
Telling porky pies
The world’s gone crazy
There’s so much wealth
Flushed down the drain
But so’s my mental health
It really doesn’t matter
There’s so much chatter
When the face on the screen
Says it’s safe, not safe.
Album co-producer/co-writer and veteran journeyman guitarist Mark Gemini Thwaite, who’s spent the past several years collaborating with a staggering array of artists (The Mission, Peter Murphy, Tricky, Julianne Regan and late Killing Joke bassist Paul Raven [in the band Mob Research], to name but a few), returns to deliver the same high-caliber musicality that he brought to Ferguson’s 2018 debut solo EP, Remote Viewing. (His playing on “Extrapolate” and “Plausible Deniability,” which both give more than a passing nod to the stylings of Killing Joke’s Geordie Walker, is particularly blistering.) Additionally, Tim Skold (best known for his stints with Marilyn Manson, KMFDM, ohGr and – if you’re of a certain age like me – Shotgun Messiah) bolsters the album’s impact through a guest appearance on “Seeping Through The Cracks,” while Die Krupps mastermind Jürgen Engler appears on album closer “Dystopian Vibe.”
(Speaking of Die Krupps, Ferguson contributes drums to the group’s stellar rendition of Gang of Four’s “To Hell With Poverty” from its upcoming covers collection, Songs From The Dark Side Of Heaven.)
As for the drumming…well, this album has the name Big Paul Ferguson on the cover. If you’re a Killing Joke fan, get ready to groove. If you’re in the unfortunate position of also being a drummer, prepare to be horrified and humbled. Again. (Take a listen to his playing on “Glass Houses” – another dose of game over for most of us, I’m afraid.) Massive respect to him for keeping his skills consistently sharp and evolving through nearly 45 years of recorded output.
Ferguson once famously described the music of Killing Joke as “the sound of the earth vomiting.” Virtual Control is the sound of the world recoiling from the horrors it has created for itself under the guises of security and progress, delivered through thoughts and music that straddle the line between rage and resignation. This is more than an album; it is an essential statement on this critical moment in human history.
Pre-order Virtual Control at Cleopatra Records.
Big Paul Ferguson on Facebook
JOEL GAUSTEN ON FACEBOOK