"Motherf**ker!:" The Oedipal Rage behind "The Many Saints of Newark" (SPOILERS) 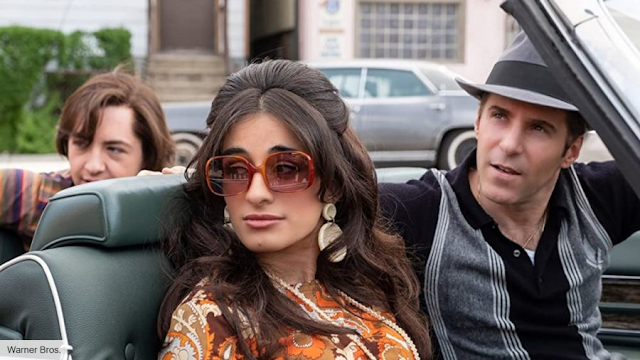 Despite presenting a world of gun-toting tough guys and chest-beating bravado, it’s Giuseppina Bruno – not Tony Soprano, and not even protagonist Dickie Moltisanti – who matters most in The Many Saints of Newark.

This truth becomes clear early in the film, when Giuseppina (played with doe-eyed aplomb by Michela De Rossi) utters the word “motherfucker.” On its surface, the scene is a chuckle-inducing throwaway: New to America, the young Italian beauty is slowly grasping English while living in the company of a crew of Jersey mobsters – most notably her new lover, Dickie. (It’s a pretty easy word to pick up in a crowd like that, no?) But what’s important here is that she says it with equal parts glee and authority – cutely enjoying the novelty of expressing a dirty American word while simultaneously giving the audience more than a passing nod to its relevance.

“Motherfucker” carries considerable weight in this film. A few minutes prior to this pivotal scene, Giuseppina is introduced to Dickie – and the rest of us – as the much younger bride of his father, Hollywood Dick. At first, both Moltisanti men appear decent enough (at least by gangster standards): Dickie is a charismatic gentleman whose attitude and mannerisms hint at a heart of gold under his flashy wardrobe, while Hollywood Dick comes off as a doting husband – well, a doting husband with a subtle penchant for control and a glaring habit of speaking for his better half.

Before long, Hollywood Dick’s power over Guiseppina reaches a savage climax when he kicks her down the stairs for keeping an untidy bathroom. Upon learning of what happened, Dickie – fueled by memories of his father’s abuse of his mother – confronts the elder Moltisanti in his car. The exchange soon turns violent, resulting in Dickie killing dear ol’ dad by repeatedly bashing his head against the steering wheel. Unlike the ice-cold vibe of typical mob film deaths, the unplanned act leaves Dickie in a state of shock and panic – a condition worsened when he suddenly has to contend with distracting his wife, Joanne, and Tony (still a young boy at this point in the film) from the reality of what has just occurred.
And before long, Guiseppina becomes Dickie’s goomah.
Of course, the problem with being someone’s side carnival is you’re always left waiting for your ticket: Guiseppina makes Dickie dinner, only to have him swiftly get dressed and return to his regular life when responsibilities call. She also gets frustrated by what she perceives as Dickie’s disinterest in helping her open a beauty parlor. Alone and out of place in a foreign land, she finds solace in the arms (and more) of Dickie’s black associate, Harold, who concurrently separates from his Jersey crime connection and builds his own presence on the streets (including a murderous attempted takedown of Dickie’s crew) as racial tensions in the area escalate.
The inevitable revelation of Guiseppina’s betrayal leads to the film’s most bone-chilling scene. While the couple take an idyllic stroll on the beach, she confesses her infidelity to Dickie, who devolves into rage over his lover’s illicit acts with a “murdering nigger.” Within seconds, he drowns her, leaving her lifeless body to float above the waves. Guiseppina’s swift death comes out of nowhere and parallels the sheer brutality and masculine force of Ralph’s murder of Tracee during The Sopranos’ fourth season. But unlike Ralph, Dickie seems genuinely appalled by his actions as he suddenly finds himself responsible for the brutal death of a second loved one. In a flash, Dickie, who initially earned the audience’s empathy in his role as Guiseppina’s protector, becomes worse than the monster he originally killed in her defense.
The audience may care for Dickie as a character, but he is still a tragic personification of evil. It’s the same duality that made us eagerly follow an adult Tony’s flawed attempts to balance family and family for six seasons despite the fact we were rooting for a killer every step of the way. And despite Dickie building an empire in the darkest corners of New Jersey while fending off imposing male adversaries, the actions of a lithe female – driven and ultimately destroyed by her desire to achieve something greater for herself – lead to his undoing. Dickie is assassinated at the film’s conclusion, but he truly died with Guiseppina on that beach.
At a superficial glance, women were seemingly given short shrift in The Sopranos, often reduced to serving as fretting wives, background strippers at the Bing or runtime-filling goomahs. But in reality, some of the series’ strongest and most impactful characters were female: Janice schemes her way through her storylines, while Livia – a classic case of Borderline Personality Disorder and the root of most of Tony’s inner conflicts – torments her son’s psyche even after death. And of course, Dr. Melfi – the sanctuary-providing recipient of Tony’s most insidious confessions and arguably the show’s greatest moral compass – was a woman.
The Sopranos was a ladies’ playground; the men merely existed in it.
(By the way, pay very close attention to Vera Farmiga’s portrayal of a younger Livia. She looks and acts an awful lot like Carmela at times, doesn’t she? I doubt this detail – presented during a movie with a subplot involving a man’s affair with his stepmother – is a mere coincidence. You can practically feel Melfi’s future appointment book getting filled as this film unfolds.)
And then there’s Junior, the man responsible for a narrative bombshell in the film’s final act. The guy’s always had an inferiority complex, which we saw a lot of through his deteriorating relationship with Tony in the original series. In The Many Saints of Newark, Dickie – dripping with good looks, charm and street smarts – regularly upstages Junior in that thing of theirs. Later, Dickie mocks the balding and bespectacled Junior when he hurts his back while slipping down some stairs. This back injury leads to Junior’s sexual ineptitude – and, notably, emasculating words from the woman in his bed. It’s the final straw for Junior and the moment when Dickie’s fate is sealed.
For all its surface misogyny, The Sopranos was always a tale driven by women. The Many Saints of Newark continues this trend, mixing in enough Greek tragedy to brilliantly undermine the cinematically alluring but ultimately paper-thin machismo of Mafia culture.
JOEL GAUSTEN ON FACEBOOK