These haven’t been the best of times, and the world needs live music now more than ever. People also need a reason to let out some real laughter. It’s quite rare to experience both at the same time, but that’s what former Yes keyboardist/Prog Rock legend/absolute nutter Rick Wakeman delivered during his recent stop in Derry, NH on his current “Even Grumpier Old Rock Star” US Tour.

A sequel to his 2019 “Grumpy Old Rock Star” Tour (which shared its name with his 2008 book), Wakeman’s current solo jaunt finds him entertaining fans with selections from his 50-year music career and a heavy dose of his fantastic brand of brilliant – and often quite bawdy – humor. (Think Mozart meets Graham Chapman.) One only needs to take a look at the man’s notorious dirty joke-filled acceptance speech during Yes’ 2017 Rock & Roll Hall of Fame induction ceremony to get a sense of what it’s like to spend an evening with a man who is equal parts meticulous composer and mirthful court jester. After all, anyone audacious enough to create an album like 1975’s The Myths and Legends of King Arthur and the Knights of the Round Table certainly isn’t afraid to shun convention. When it comes to the sometimes stuffy world of Prog, fans can always count on Wakeman to deliver his musical wizardry with a mischievous wink.

Without giving away too many punchlines, I’ll say that the guy is an utter riot. Whether discussing his advancing age (“I wear a pair of glasses to find the pair of glasses I’ve put down!;” “It gets harder when you get older, doesn’t it? Or maybe it’s the opposite…”), his history of heart attacks (“I stopped having them, ’cause they hurt!”) or a slew of other topics (including a story about the late Keith Emerson, a lavatory and an awards show…You really had to be there), Wakeman had the crowd in stitches with his between-song banter. These stand-up routines were juxtaposed with the sonic side of the festivities, which showcased the beauty of his talents on the keys. Every note of this performance – from show opener “Sea Horses” (off 1979’s Rhapsodies) to the final moment of encore “Merlin The Magician” (off the aforementioned King Arthur album) – was captivating. When not gifting the crowd with solo material, he performed classic songs (often infused with hysterical introductory tidbits) he recorded with the likes of Yes, David Bowie and Cat Stevens. Additionally, he performed a heartfelt tribute to The Beatles (“Help!” and “Eleanor Rigby”). For this writer, Wakeman’s loving renditions of Bowie’s “Space Oddity” and “Life On Mars?” were the evening’s most impactful numbers. 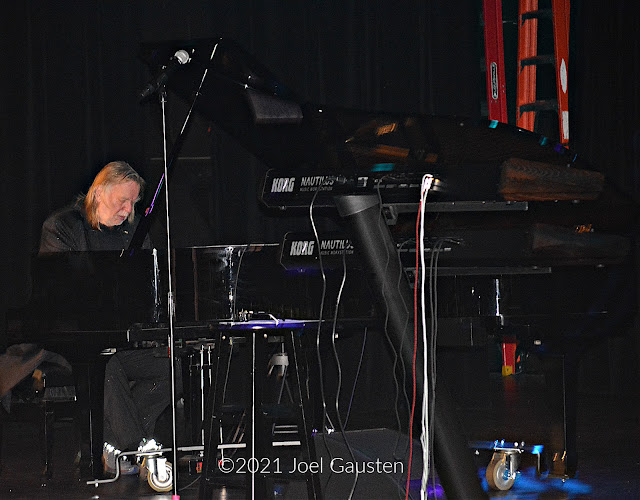 Wakeman’s return to American stages is the latest in a series of activities he’s undertaken during the COVID-19 era. In addition to releasing his latest solo album, The Red Planet, in June 2020, he revised his glorious past earlier this year with the release of Rick Wakeman’s Yes Solos, a stunning collection of some of his finest onstage moments with Yes from 1971 to 2003 (with three bonus solos recorded in 1989 during his time with the Yes spin-off group Anderson Bruford Wakeman Howe). Full marks to the guy for taking such an enjoyable show – and a chance for folks to enjoy live music and jokes again – out on the road.

ProTip: Be sure to hit the merchandise table and pick up a copy of the fantastic Even Grumpier Old Rock Star Tour programme, which features plenty of Wakeman’s wit and wisdom – as well as a biography presented as a true-or-false quiz!

An Interview with Rick's Son Adam