Depending on your threshold for esoterica, Voïvod is either one of the most thrilling bands in Metal history or an assemblage of sonic weirdos who prompt more headscratching than headbanging.

Never a group to take a conventional approach to anything, Voïvod has been unleashing consistently challenging and innovative music for 40 years now. The Canadian quartet never truly broke through in America, but that hasn’t stopped it from churning out an ever-growing collection of albums and EPs for a rabid cult audience here and abroad. Voïvod’s recent North American tour, which wrapped up with a fiery performance at Boston’s Brighton Music Hall in June, provided the faithful with an opportunity to celebrate this fact while taking in some of the group’s latest musical explorations in a live setting.

Naturally, the band’s 15th full-length album, this year’s fantastic Synchro Anarchy, received the biggest chunk of the Boston show’s 11-song set via three selections (“Planet Eaters,” “Sleeves Off” and the title track). The band also showcased earlier albums Angel Rat (“The Prow”), Nothingface (“The Unknown Knows,” the band’s cover of Pink Floyd’s “Astronomy Domine”), Dimension Hatröss (“Tribal Convictions,” the show-opening “Experiment”) and Killing Technology (“Overreaction”) and went all the way back to 1984’s War and Pain to encore with “Voïvod.” The Wake (2028), the first full-length Voïvod release to feature bassist Dominic “Rocky” Laroche, was represented via a jaw-dropping rendition of “Inconspiracy.” Based on the crowd reaction throughout the set (plus the fact that the band’s merch stock was 95 percent cleaned out by the time the tour hit Boston), Voïvod’s latest stateside run proved that there is still plenty of life left in this veteran act.

Considering the ongoing underground popularity of the band’s classic ’80s/early ’90s material (with the ’84-’88 era in particular extensively documented in the newly released Forgotten in Space box set), Voïvod’s song selection at the Boston show didn’t come as a great surprise – and that was the problem. Voïvod shows in recent years (at least the ones this writer has seen) have excluded material from its three-record run with former Metallica bassist Jason “Jasonic” Newsted in tow in the 2000s. In addition to featuring some fantastic tunes, those releases (2003’s exceptional Voïvod, 2006’s Katorz and 2009’s Infini) represent perhaps Voïvod’s most high-profile period in the States. Sure, those albums are considerably more musically stripped down than the band’s trademark (and much celebrated) everywhere-at-once aesthetic, but the addition of at least one song from each of these oddly overlooked releases would be nice.

Quibble aside, Voïvod remains one of the greatest live acts on Earth. If you missed out on this most recent North American trek, make sure to correct that mistake next time. 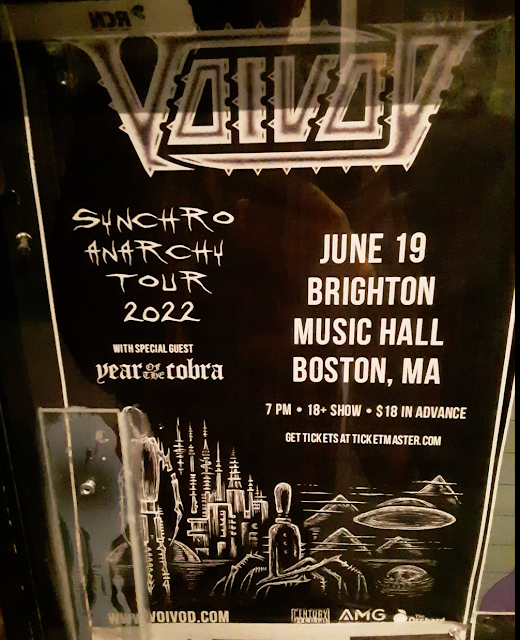