Voivod Lives: Michel “Away” Langevin on Lineups, Lemmy and Keeping the Band Alive


For nearly 35 years, Voivod has created some of the most esoteric sounds in Metal. As recently discussed at length on this site, the band's upcoming EP, Post Society (Century Media), is one of their strongest releases and an essential addition to a discography that has never once disappointed. Through lineup changes (including a stint with former Metallica bassist Jason Newsted in the 2000s), experiments in musical direction (the band's mid-to-late-'90s Hardcore trio phase) and even death (the tragic passing of original guitarist Denis “Piggy” D'Amour in 2005), Voivod continues to exceed expectations and guide listeners to new sonic territories.

Since the very beginning, the band's aural assault has been anchored by drummer and artist Michel “Away” Langevin, the only member of the band to appear on every Voivod release. Currently, he is joined by original singer Denis “Snake” Bélanger (who returned to the band in 2002 after nearly a decade away), guitarist Dan “Chewy” Mongrain and new bassist Dominic “Rocky” Laroche (who replaced original bassist Jean-Yves “Blacky” Thériault after he left Voivod for a second time after returning for the band's previous effort, 2013's Target Earth.) In addition to his work with Voivod, Away released the intriguing 2013 field recordings CD Cities (Utech Records) and is currently involved in a variety of projects including the band Tau Cross with Rob “The Baron” Miller of Amebix.

I recently had the pleasure of connecting with Away to discuss Post Society, Voivod's current lineup, the band's debt to Motorhead and what has kept this underground institution alive and thriving for more than three decades.

It's been a couple of years since Target Earth was released. What led you guys to decide to do an EP now as opposed to doing a full-length album a little bit further down the road as the follow-up to the last record?

We had a lot of touring and didn't have much time to record, unfortunately. We had to write in the bus and record between tours. We had the idea of releasing split seven inches and an EP and such to sell at the merch booth and eventually write another batch of songs and compile everything into one album. It will probably be ready either at the end of this year or early next year, I would say.

How indicative is Post Society of what we can expect to hear on the next full-length album?

I think where we're heading for right now is probably a little more Prog Rock than the Jason years. We were already going towards Progressive Metal for Target Earth, but I think we seem to be pushing the limits of what we can do in terms of Progressive Metal for the new material. We don't really overthink the music we're writing; we try to create music that we want to play right now. It's definitely the ingredients of what we've learned along the way and what is on the [past] albums with a new touch from Rocky and Chewy.

Chewy's been with you for some time now. How has his addition to the band and his creative input enabled Voivod to carry on and move forward to this point?

It's really amazing because we knew he could perform the material we wrote with Piggy perfectly, but to write material and keep the spirit of Voivod intact is another thing. When we started to write Target Earth, we realized he was full-on Voivod in every way. It's so Voivodian, what he writes. Snake and I really feel at home. With the addition of Rocky, who is a childhood friend of Chewy's, it's the perfect team because Snake and I met when we were kids. It's a very good lineup right now; it's pretty efficient. With Rocky and Chewy, it's funny because their first show was Voivod, then they bought guitars – and now they are in Voivod! (laughs) They were like 13 back then.

Like many fans, I was really excited to see Blacky return a few years ago. Unfortunately, that wasn't meant to be. What led to that change in personnel?

A different point of view regarding how the band should be managed. Blacky is very much a do-it-yourself type of guy, which is very respectable, but the three other members in the band didn't agree on the fact that the band should be self-managed. Blacky parted ways with us; we hope for the best for the guy. It's sad, but we had a pretty good six years with him and did great stuff, a very good album and lots of touring. This is the fifth lineup right now; we just have to move on. It's really hard to keep a band together for decades. People leave the band, people unfortunately pass away and so on. But I think we're pretty lucky, actually. I've been on every album for, I don't know, 33 years, and every time we go on tour, people are very loyal to us and show up. It is great to have such a long career.

As you said, you're the only member who's been on every Voivod album. You experienced Voivod with Snake and of course without him as well. Having lived in the band in both situations, how would you compare the two incarnations? What do you think Snake brings to the band that is unique to that version of Voivod?

Definitely the Punk element in the voice. It's something of an interesting nature to Voivod that probably went missing when we were functioning as a Hardcore trio, so that's one thing. Also, mixing the Sci-Fi concept with street-oriented lyrics is his thing. That's something that really adds to the band, but I must say that I'm proud of every lineup and what we've released with those lineups. It was great to be with Jason, and it was great to be with [former bassist/vocalist] Eric [Forrest]. Whenever we cross paths, they come on stage and jam with us. It's like a big family; it's really great.

I really enjoyed your Cities solo album, which was actually on my Best of 2013 list. Do you have any plans to pursue other projects of that nature?

I still do a lot of field recordings. If I release another one, it's probably going to be on Utech, but it might be on vinyl because I'm not sure if Utech are doing CDs anymore. I do lots of field recordings on tour around the planet. I've always been obsessed with tapes, collage, field recording and random sounds. Piggy got me into it, actually, when we were teenagers. He was listening to a lot of Stockhausen and stuff like that. All the early intros of the shows and some of the interludes on the albums were made with tape manipulations by Piggy. He really got me into it, and I never stopped listening to that weird stuff. 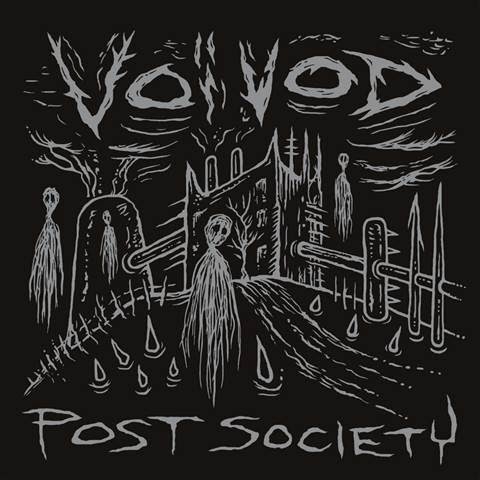 One of the highlights of Post Society for me is your cover of “Silver Machine,” which I know was recorded and announced before Lemmy's passing. Obviously, you guys toured with Motorhead, and you covered Motorhead in the early days. What was that band's greatest impact on you as a musician?

It's definitely the band that had the most impact on Voivod. We were fans of Discharge and Venom and all that, but Motorhead was really the focus of Voivod in the sense that I totally copied 'Philthy Animal' Taylor, and Snake's vocals are really influenced by Lemmy's vocals. Of course, Piggy was a huge fan of 'Fast' Eddie; actually, Piggy's first nickname was 'Fast Piggy.' (laughs) Motorhead was really the example for us. It was just heavier than everything, especially at the end of the '70s and very early '80s. It was the basis for everyone who wanted to be heavy. All of a sudden, everyone wanted to be heavier than Motorhead, then all of a sudden, everybody wanted to be heavier than Slayer and so on and so on. It turned into blast beats! (laughs)

How were you first introduced to Hawkwind?

Again, this is all stuff that Piggy was aware of in the '70s. We were two or three years younger than him, and he really introduced us to weird Progressive Rock and German Krautrock and all that. Hawkwind has definitely always been one of my favorites, along with Gong. When we did the last sessions for the new EP, we heard a lot about cancelations of shows on the Motorhead 40th Anniversary Tour. We started to worry about Lemmy. While in the studio, we decided to do 'Silver Machine.' We did it really quick; we learned it in the studio, winged it and tried our best. But it was definitely to pay homage to Lemmy. Of course, we were not expecting him to pass away; we just felt it was time to pay tribute to him.

Being in a band for nearly 35 years is quite an accomplishment, especially in today's business. What continues to make Voivod work?

It's a really tough question. One aspect that is probably still relevant is the dystopian concept. A lot of the lyrics were based on articles in either Omni or Discover from the '80s, and they were trying to project into the future. It turns out that, on many points, they were right. Not only that, we were really influenced by the anarchist Punk and Hardcore, like Crass, Discharge and Conflict. They also would write about the destruction of Earth and all that. I think a lot of attention is directed towards old school Thrash Metal nowadays because most of these people talked about the same nuclear fears and all that. In terms of having people being so loyal to us year after year, it's really hard to say. I'm in a tough position, because we'll show up to a city where people will tell us, 'You’re the greatest band on Earth or in the universe,' but we're still underground. We just keep going in the parallel underground dimension year after year. It's really hard for me to take a step back and look at Voivod and think objectively about it; it's strange. But I'm very grateful because I have a great life in the sense that I spend half my time either touring or recording with Voivod and the other half doing art for other bands, so it's perfect.


*Portions of this interview were edited slightly for clarity.