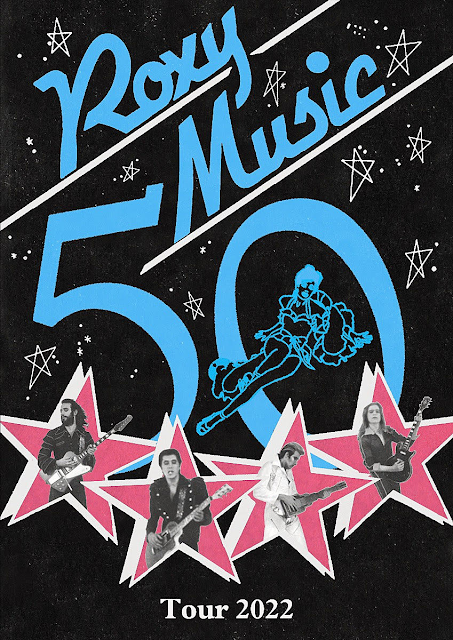 It’s impossible to write a review of a Roxy Music show in 2022 without first acknowledging that it's really an examination of four bands.
The classic Roxy Music, represented on 1972’s Roxy Music and 1973‘s For Your Pleasure, looked like extras from The Rocky Horror Picture Show and once recorded a gloomy, nearly six-minute ode to an inflatable sex doll (“In Every Dream Home A Heartache,” later covered with great aplomb by Rozz Williams and Gitane DeMone of Christian Death). Even as Glam Rock stormed England and beyond in the early-to-mid-’70s, Roxy Music’s otherworldly sounds and aesthetics were still enthralling headscratchers. Diehards could argue – with a fair amount of validity – that much of the band’s initial freewheeling spirit dissipated upon the 1973 departure of original synthesizer genius Brian Eno.
The second wave of Roxy Music – showcased on the stellar triple-shot of 1973’s Stranded, 1974’s Country Life and 1975’s Siren – found the group still somewhat embracing the experimental oddness of the Eno era while also navigating towards increasingly commercial waters. The sonic juxtaposition paid off: The Funk/Disco bounce of Siren’s “Love Is The Drug” landed Roxy Music in the American Top 40, while the group still retained at least some of its earlier esoteric touch in spots. (For this writer’s money, the eternally thrilling Country Life is the strongest example of the mid-period Roxy Music’s ability to straddle the line between art and commerce.)
Roxy Music’s third wave began with 1979’s polarizing Manifesto, an album steeped in then-current trends (the fun but ultimately disposable New Wave of “Trash”) but nonetheless saved by some truly fantastic Pop songwriting (the lovely “Dance Away”). But was this music really roxy? Always fashion-forward, frontman Bryan Ferry spent the preceding decade gradually going from space suits to suit suits. By the time the ultra-slick (and, frankly, largely irredeemable) Flesh + Blood hit shelves in 1980, he was infinitely more Gabriel Byrne than Gary Glitter. As a consequence, Roxy Music had become Yacht Rock for people just cultured enough to maybe have some Fitzgerald or Nabokov in their home libraries. Pretentious at worst and soulless at best, Flesh + Blood was wine-women-and-blow music for aristocrats – perfect for the decadent 1980s but terrible for anyone who favored substance over style. (Look, there’s dark and cool “In Every Dream Home A Heartache”- level decadence and then there’s this shit.) If the Eno era came from Mars, then the Roxy Music of Flesh + Blood resided in mansions. Plot lost.
But then there’s Avalon. Released in 1982, Roxy Music’s studio swan song saw the group’s various aural aspirations come to fruition. An absolutely gorgeous record, Avalon took Flesh + Blood’s formula and sharpened it, providing a listening experience both beautiful and brooding. (Although a deceptively upbeat number cleverly designed for America radio, the album’s best-known song, “More Than This,” also chronicled the smoldering embers of a doomed affair.) Avalon is For Your Pleasure grown up and Flesh + Blood with balls – and the first and only Platinum studio album Roxy Music had in America. And while many of the band’s experimental tendencies had long fallen by the wayside by then, Avalon remains a masterpiece of its time.
Now, in 2022, we have the fourth wave of Roxy Music, sporadically active as a touring entity since 2001 and currently on a 50th Anniversary Tour. This past weekend, the trek touched down at the recently opened MGM Music Hall in Boston. Comprised of Ferry, original drummer extraordinaire Paul Thompson (justifiably revered by scores of timekeepers for his exceptional work on the band’s early albums), original guitarist Phil Manzanera and original saxophonist Andy Mackay (plus a whopping nine onstage auxiliary performers in tow), the band’s latest incarnation is mostly defined by what it isn’t. Eno’s nowhere to be found (of course), and the band’s approach to the Boston show’s 20-song set largely felt as if Ferry and Co. had been encased in ice circa 1982 and chipped out for this latest jaunt. Although the band’s set gave plenty of attention to the Eno years (with show opener “Re-make/Re-model,” “Do The Strand” and a fittingly morose rendition of “In Every Dream Home A Heartache” clear highlights), virtually everything was performed through an Avalon filter – making the show Roxy Music Lite from start to finish. This certainly fit the tunes from the Avalon era exceptionally well but left quite a few ’70s songs without the trademark grit of the era that spawned them to balance out the gloss. What Roxy Music 4.0 delivered in Boston was a smoothed over and palatable version of the three eras that preceded it without offering a moment of risk or new adventure. And at 76, Ferry simply doesn’t have the pipes he once had. This was most noticeable during “More Than This,” which benefited from a trio of backing singers doing some of the heavy lifting.
Fortunately, none of the above quibbles mattered. Ferry is still a captivating frontman – one of Rock’s best – and his vocal limitations actually led him to present many songs in a subdued croon (not unlike Bowie’s in his final years) that added some interesting shades to the material. Manzarena and Mackay are still two of the finest – and grossly underrated – musicians of any decade (and both absolutely smoked on stage in Boston), and Paul Thompson is Paul Thompson. Enough said.
And those songs… My God, those songs…
Nobody should reasonably expect the Roxy Music of today to be the gloriously innovative clusterfuck it was with Eno – that Roxy Music was done 49 years ago! And considering that Ferry has basically kept up the same Avalon-driven image and atmosphere for four decades now as a solo artist, audiences should naturally expect “Avalon” and “To Turn You Own” to land on the set list at the expense of, say, “Whirlwind” or “Casanova.” Fans who accept this fact – and what Roxy Music is willing to give them in 2022 – will be treated to a pristine live experience that will remind them of just how extraordinary the group’s output – regardless of era – truly was and still is.
Official Roxy Music Website
JOEL GAUSTEN ON FACEBOOK