To put the lengthy career of English Metal legends Raven into perspective, the band formed in Newcastle the same year Aerosmith released Get Your Wings and Bon Scott joined AC/DC. That’s a long goddamn time ago, but Raven – led since the beginning by brothers John and Mark Gallagher – is as active now as it was when it first broke through in America in the early ’80s.

This Friday will see the release of Leave ’Em Bleeding, a new Raven compilation on SPV/Steamhammer. Showcasing some of the heaviest music the band has ever recorded, Leave ’Em Bleeding features three tracks off 2020’s Metal City (“Top Of The Mountain,” “Metal City,” “The Power”), two tracks off 2015’s ExtermiNation (“Destroy All Monsters” and “Battle March/Tank Treads [The Blood Runs Red]”), a live track (“Crash Bang Wallop” off 2019’s Screaming Murder Death from Above: Live in Aalborg) and six rare bonus tracks (including covers of Thin Lizzy’s “Bad Reputation” and Montrose’s “Space Station #5”).

“As we are moving on to another label [Silver Lining Music], it seemed a great way to sum up the last 10-15 years with some of the cool tracks off those albums plus all the Japanese/Brazilian/Outer Mongolian extra tracks that a lot of people missed out on!” John explains. “We picked the ‘barn burners’ from the last few [albums], those extra tracks, one from the 2019 live album plus an unreleased version of ‘Stay Hard’ from our 2017 US tour, which is pretty cool!”

The material on Leave ’Em Bleeding features intense drumming courtesy of both Joe Hasselvander (who was a member of Raven for 30 years before health concerns led to his departure in 2017) and current skin basher Mike Heller, who also currently drums for Fear Factory. John is quick to praise Heller for his part in keeping the band’s engine running.

“He’s been quite the inspiration and a great fit. He’s a phenomenal talent behind the kit but also contributes in so many other ways. He always has ideas for artwork and is a big part of writing and arranging the songs with us.”

While 48 years would age anyone – this writer is 45 and grey as hell! – John’s timeless Metal vocal stylings still pack plenty of ’80s-era power.

“I’ve always looked after myself and my voice – no drinking, smoking or the funny stuff. Being a ‘Boy Scout’ has paid off in that my voice is as good if not better than ever. As long as I get my 40 winks in, I’m good!”

Raven is currently on a North American tour commemorating the 40th anniversary of 1982’s Wiped Out, a bonafide Metal classic that is being performed on stage in its entirety for the first time ever.

“[Wiped Out] was a groundbreaking album in that it had fast, crazy songs and was unrelenting,” John recalls. “It’s certainly gonna be a blast playing these songs, as many of them haven’t been played in many, many years – and three have never been played live!” 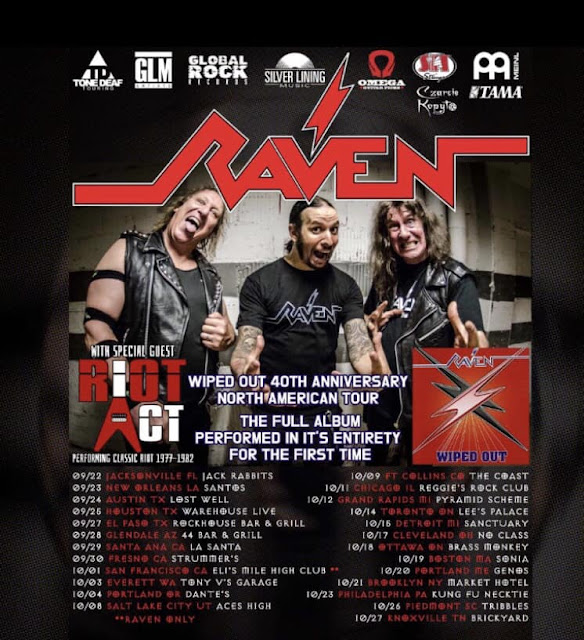 The tour also marks the 40th anniversary of Raven’s first-ever American show: The 1982 “Halloween Headbangers Ball” in Staten Island with Riot and Anvil. In a cool coincidence, Riot Act – featuring former Riot guitarist Rick Ventura – is opening for Raven on its current US dates.

“[Riot Act] has some absolutely classic songs, and I saw them in the UK not long ago – great show, too! I’m looking forward to having them on board!”

In addition to living on the road for the next several weeks, the members of Raven are preparing for the 2023 release of their 15th studio album.

“It’s gonna ‘leave ’em bleeding’!” John comments with a laugh when asked to describe what fans can expect from the upcoming record.  “We knew we had a tall order to follow Metal City, and I think we’ve done just that in all departments – songwriting, arrangements, musicianship and pure energy! We are currently mixing the album, and it’s sounding amazing. It will be out in May, so you shall have to hang in there!”

In the past 48 years, the Gallagher Brothers have seen and been through it all – record labels both large and small, drummers who have come and gone, peaks and valleys in the popularity of Metal and even a freak 2001 accident that crushed Mark’s legs and kept the band off the map for three years. No matter what, Raven has persevered – and its legion of diehard fans keep coming back. John credits the band’s longevity to a single word: Tenacity.

“It’s an attribute of our hometown people for sure, and that stubborn ‘never say die’ attitude has paid off. People know when you are real and you are doing this for the right reasons. We also really enjoy being in this monster we’ve created – as well as knowing how incredibly lucky we are to do this – and doing it at a high level. It’s humbling to look back at 48 years of this band, and we uphold our legacy by giving 100 percent 100 percent of the time!”