Some Thoughts on the Most Gruesome Film in Decades 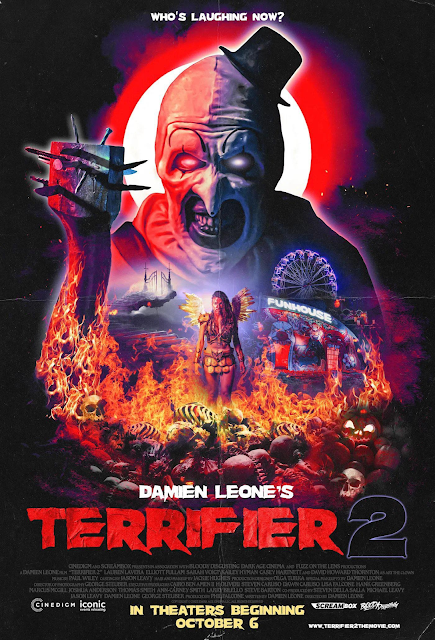 In an era of safe spaces and political correctness, the modern Horror movie icon known as Art the Clown is a breath of blood-spewing fresh air.
Although Art the Clown had already existed for a few years via a couple of short films and the 2013 anthology release All Hallows' Eve (all made by director/character creator/all-around sick fuck Damien Leone), he got his first true opportunity to shine (and slaughter) in the 2016 feature film Terrifier, easily one of the most offensively grotesque things ever conceived for cinema. In one unforgettable scene, a suspended nude woman (Dawn, played by Catherine Corcoran) is hacksawed in half via her vagina. (Fun fact: Actress Jenna Kanell, who played Tara in the film, insisted on remaining tied up in between takes so that she would psychologically feel as if she were tied up when filming. Neat.)
Art the Clown is a perfect movie monster – extravagantly done up in clown makeup and attire and communicating only through exaggerated facial expressions and body movements. Now, he returns in Terrifier 2, an absolute mindfuck of a viewing experience that takes the extremities of its predecessor and pushes them to the nth degree.
Reviewing this film without revealing any spoilers (or getting too deep into all the awesome kill scenes) is a tough task, so I’ll keep things relatively brief here. What’s important to take away is that Terrifier 2 is hands down the finest Horror movie since the genre’s ’80s heyday. The film greatly expands on what worked best in the first Terrifier – namely the murder scenes and Art the Clown’s menacing presence – and elevates them to stunning new heights. (The surreal and disturbing “Clown Café” dream sequence in particular is a brilliant work of violent, sadistic art.) While there’s certainly more carnage this time around, Terrifier 2’s greatest strength lies in the incorporation of a rare ingredient in Horror entertainment: Actual character development. Sienna (played with expressive-eyed charm by Lauren LaVera) and Jonathan (played by Elliott Fullam, best known as the host of the wildly popular Little Punk People celebrity interview series on YouTube) are deeper and far more engaging than Horror movie archetypes, leading viewers to sympathize more with their struggles at home – fatherless and attempting to find a sense of normalcy with their overworked, overstressed and widowed mother, Barbara, played by Sarah Voight – than with the fact they spend the final third of the movie getting fucked up by a brutal Bozo. These characters – and actors – have genuine depth. You end up caring and rooting for them even as you enjoy Art the Clown’s efforts to do them in. Shockingly enough, the empathy these characters inspire is actually the most memorable thing about Terrifier 2.
Well, that and the big scene with Allie (played by Casey Harnett), which should come with its own support group. (For fuck’s sake!)
Full marks also go to actors David Howard Thorton – who horrifically (and often comically) brings life to Art the Clown without having to say a single word – and Amelie McLain, who chills to the bone in her role as Art’s demented little sidekick.
A few more things:
1. Already a master of creating great unease, Leone ups his game in the discomfort department by stretching Terrifier 2’s runtime to nearly 150 corpse-creating minutes. (Hint: Keep watching once the end credits begin to roll.)
2. Terrifier 2 was made for only $250,000 – a jaw-dropping figure when considering the high level of effects and overall inventiveness that went into making it. Sure, some of the gore looks cheap and fake as hell, but Leone and Co. clearly put their money where it mattered most – namely in expertly creating a visual and mental mood of impending dread in virtually every scene. There was clearly love put into every ounce of blood sprayed throughout this film – and Thorton’s and McLain’s makeup and outfits are fucking extraordinary.
3. As far as horror film heroines go, Sienna is this generation’s Nancy from A Nightmare On Elm Street. LaVera is the first real Scream Queen we’ve had in ages. I can’t say enough about how great she is in this film.
4. Fullam, who also just put out some fantastic music on the Kill Rock Stars label, is going to be a major star soon. Mark my words.
5. Make sure to see Terrifier 2 in a (preferably crowded) movie theater. If you’re of a certain age, you’ll love the throwback feeling of seeing a great slasher flick on the big screen.
6. Go on an empty stomach.
Official Terrifier 2 Website
JOEL GAUSTEN ON FACEBOOK