Stranglers in the Night

In 1988, an 11-year-old boy went left of the dial and heard The Stranglers for the first time. Twenty-five years later, he finally saw the band perform live - VIP pass in tow.
In early June, The Stranglers toured the United States for the first time in two decades. When word got out that the Meninblack would be playing at the Brighton Music Hall in Allston, MA, I knew that I not only had to go, but also had to make it a point to shake the hands of the musicians behind some of my all-time favorite songs.

Meeting up with the band as their crew wrapped up soundcheck, I was immediately taken by how friendly they were. Dave Greenfield greeted me with an ear-to-ear smile and an enthusiastic handshake, while current frontman Baz Warne and co-founder/bassist JJ Burnel could not have been nicer. All three seemed genuinely pleased to be playing the States and meeting people on the road, despite the fact that the great Jet Black (who turns 75 this August) was too ill to drum on this stateside jaunt.
Soon after leaving the fellows to their pre-show business and hopping out of the bar to get some fresh air, I received a message on my phone from Massachusetts resident, former Gang Of Four drummer and all-around great guy Hugo Burnham, who wrote that he was in town for the gig and having a bite down the street. Hugo was one of the very first people I interviewed way back in 2005 for my perpetually-in-progress book, Albums that (Should've) Changed the World, and we’ve kept in touch ever since. Warm, good-natured and armed with a sharp sense of humor, Hugo is fantastic company - and, in the case of our chat outside the Stranglers show, kindly tolerant of my incessant fanboy interrogations! I’m so pleased we touched base.
It turned out that my time with Hugo and the Stranglers guys was the tip of a pretty sensational iceberg, as the crowd inside the club boasted some of the friendliest people I’ve ever met at a show. This included an incredibly nice and talkative husband-and-wife team who first met at a Stranglers gig in the late '70s – and who brought their adult daughter along for this most-recent ride. Very cool.
With a young fill-in drummer taking the place of Mr. Black, The Stranglers were absolutely amazing. Newer material like  “Freedom Is Insane” mixed flawlessly with classics like “Peaches” and “Golden Brown” and proved that a band could be at the top of their game nearly 40 years after their first show.
Personal highlights:  I was blown away by the band’s spirited rendition of “Always The Sun” (a brilliant tune from 1986 that proves that  The Stranglers were one of the very few bands who made the leap from Punk to Pop in the ’80s with great aplomb), while my jaw continually hit the ground thanks to Dave Greenfield’s (often one-handed) keyboard mastery. And seeing Hugo happily sing along and bang his fist in the air next to me as his fellow old school UK Punks blazed the stage was a thrill in itself.
Some nights are just perfect, you know?
The Stranglers’ Official Website: www.thestranglers.net 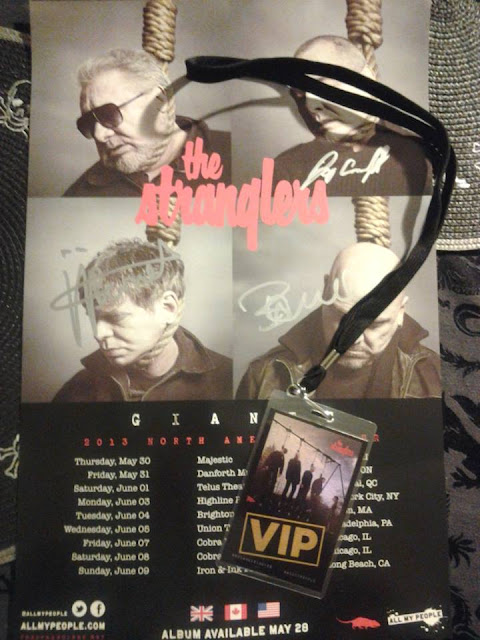