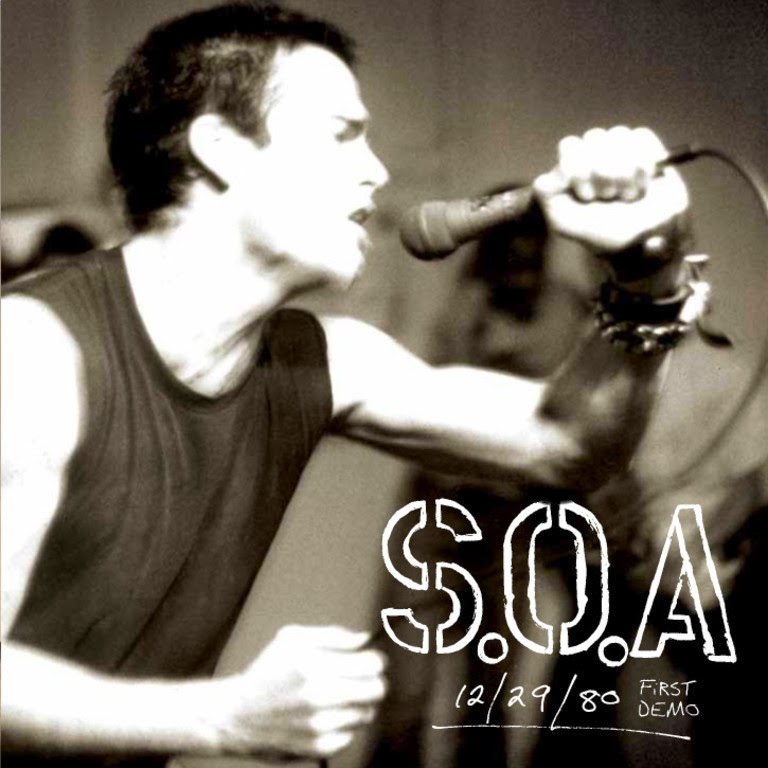 In addition to consistently adding new releases by current bands to their always-intriguing discography, D.C.’s Dischord Records has devoted considerable time in recent years to reaching as far into the dusty crevices of their recorded archives as possible to uncover previously unheard (or at least widely uncirculated) early demos from some of their most popular artists. This ongoing project includes the 2003 release of Minor Threat’s 1981 demo as a 7-inch EP and the 2012 CD/10-inch release of the extraordinary 1984 demo by Rites of Spring. Now, the label has officially released the eight-song demo recording by State Of Alert (S.O.A.)

Of course, S.O.A. is best known as the very first band to feature the great Henry Rollins. When these eight songs were recorded at the end of 1980, Rollins was a 19-year-old kid going by his real last name (Garfield) and hanging around with friends like The Teen Idles. Joined by guitarist Michael Hampton, bassist Wendel Blow and drummer Simon Jacobsen (later replaced by Ivor Hansen), Rollins fronted S.O.A. from October 1980 through July 1981 with the same youthful, raspy exuberance that fueled his early work with his next band, Black Flag. First Demo 12/29/80 is exactly what you’d expect from a band of this age bracket from this era in underground music: The whole eight-song package is over in less than eight minutes, while the usual subjects (cops, fights, etc.) are attacked with the expected amount of vitriol. Sonically, the record sounds a bit like Damaged-era Rollins fronting Agnostic Front circa United Blood. The songwriting is as choppy as the playing, but you can definitely feel the anger and passion come through in the music. Also of note is the fact that the demo’s strongest number, the mid-tempo “Public Defender,” is the only number that doesn’t hit you in the face like a pre-Ritalin freight train.

In many cases (especially on “Public Defender”), the performances showcased on this demo EP are more energetic and maybe even a bit cleaner than the music featured on S.O.A.’s lone official release, 1981’s No Policy EP.

Two of the songs featured on First Demo 12/29/80, “Disease” and “Stepping Stone Party,” were originally released on Dischord’s legendary Flex Your Head compilation, while “Gonna Have to Fight” later resurfaced on No Policy. The rest of the songs on this translucent red-colored record (beautifully packaged in a fold-out sleeve with reproduced show fliers, rare photos and even Henry’s hand-written ad for a drummer who “must have an attitude”) are unreleased versions.

Although Rollins is the most prominent person attached to S.O.A., it is important to mention that the other members of the band later enjoyed interesting times in the music world. Blow became a member of Iron Cross, whose song “Crucified” (from the must-own Skinhead Glory EP) was later covered and immortalized by Agnostic Front. Hampton later played with Hansen in The Faith and Embrace before joining forces with Rites of Spring members Guy Picciotto, Brendan Canty and Edward Janney in the amazing (and sadly short-lived) project One Last Wish. He also played with Jacobsen in the Dischord band The Snakes.

As for Rollins, First Demo 12/29/80 represents the man’s first step in a musical journey that resulted in some of history’s most powerful sounds. Within 12 short months of recording this demo, he had moved out West, joined Black Flag and posed for Ed Colver’s fake-blood-and-pre-smashed-mirror photo for the cover of Damaged. In December 1980, Rollins recorded eight songs in under eight minutes; in the early ’90s, he recorded a 14-minute song with the untouchable Charles Gayle. That’s one hell of an aural narrative. And thanks to Dischord, we can all finally experience this very first chapter.