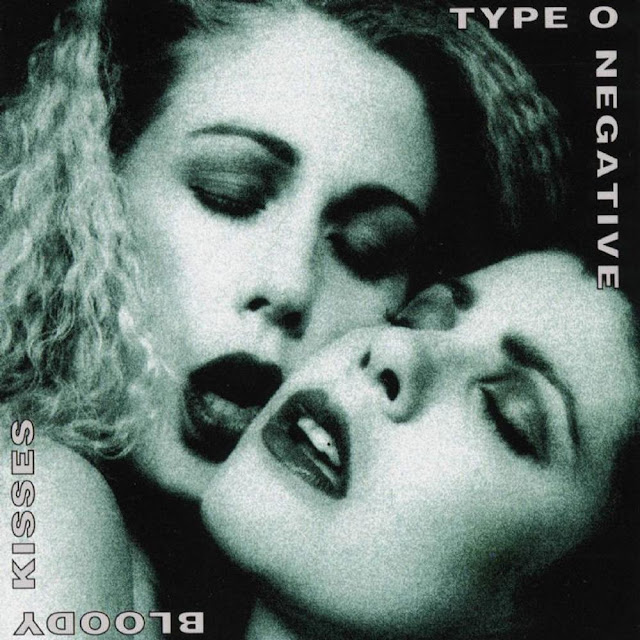 Twenty years ago today (October 30), I experienced one of the craziest and most memorable nights of my life.

There I was, standing in the crowd at The Chance in Poughkeepsie, NY and watching the new version of The Misfits – Jerry Only, Doyle, Michale Graves and Dr. Chud – hit the stage during an encore at a Type O Negative show to play a handful of classic songs. It was the first time The Misfits had performed in public in over a decade. It was the start of a new era for one of Punk's most celebrated and influential bands, and I got to see it with my own two eyes.

A lot of things led up to their seven or so minutes on stage. Earlier in 1995, Jerry and Doyle launched a lengthy audition process for a new singer and drummer. As previously mentioned here and here, I ended up meeting the guys during this time and soon started filling in on drums pretty regularly at these auditions/rehearsals. By that spring, it was pretty much determined that Michale Graves and Dr. Chud would be the guys for the job. Plans were set to have the band's first show with the new lineup be at Action Park in Vernon, NJ, with yours truly serving as the event's promoter and organizer. This sounded great on paper, but on the day we solidified the date with the venue, Doyle just stood there shaking his head, saying “I'm gonna call him... I'm gonna call him.” Of course, “him” was Glenn Danzig. It turned out that there was still some willingness on the guitarist's part to at least see if something could be worked out for a proper reunion before moving forward. A few weeks later, the guys went to a Danzig/Marilyn Manson/Korn show at (I believe) the Count Basie Theatre in Red Bank. After the show, Doyle tracked down Glenn's hotel room and went up there to try to talk to him. Before long, Glenn had Doyle removed by security. (I wasn't there that night, but this is the story as it was told to me back then, so I'm sticking to it.) So, yeah, no reunion with Glenn took place. Not too long after that night, Jerry told me that he decided that doing a big show at Action Park would be premature at that early point in their comeback, so we canceled the gig. (I did put on a show with them at Action Park the following year. One of my personal highlights from the evening was singing backups on “We Are 138” on stage alongside Zombie!'s Eric Weiss and – of all people – Bobby Steele.)

With an Action Park show no longer on the table, the real first live appearance from The Misfits 2.0 would be during the encore at the Type O show. Riding up to Poughkeepsie in the van with those guys, I couldn't get over the fact that I was about to witness history like this. On the way, Jerry gave me one of the band's newest t-shirts, which featured the “Jurek Skull” (a variation of the standard Misfits Crimson Ghost). Because this design had yet to be made available to the public, these shirts were worn as “passes” by everyone in The Misfits' entourage that night. Here's mine, which has held up fairly well: 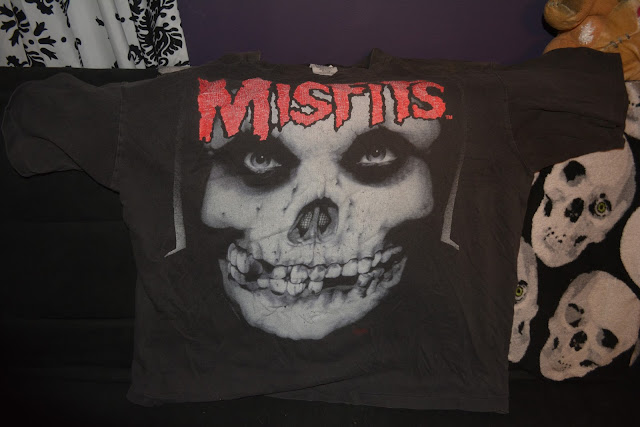 Although we missed openers Lycia and The Electric Hellfire Club, we arrived in time to catch a good chunk of Type O's incredible set. They were simply amazing, delivering flawless (and quite heavy) renditions of tracks like “Too Late: Frozen” and “Christian Woman” (which featured a guest appearance by two young ladies dressed as nuns, who proceeded to make out on stage during the song.) I had been a fan of Type O frontman Peter Steele's earlier band, Carnivore, and had followed Type O's progress since the days they went by the name Repulsion. I was really looking forward to seeing them. They absolutely fucking blew me away.

With Type O guitarist Kenny Hickey on vocals, The Misfits stormed the stage during the encore, playing “20 Eyes” and “Vampira” before Graves came out and took over for Kenny on “Astro Zombies.”

Then it was all over. I wasn't alive to see The Beatles on The Ed Sullivan Show, but I saw The Misfits' first time on stage in 12 years. (I'm pretty sure Doyle's first wife was there that night as well and filmed the proceedings. I'd kill to see that footage!)

Later that evening, Jerry brought me backstage. The first person I met was a jovial Thomas Thorn of The Electric Hellfire Club, who was quick to share his excitement over hanging out with The Misfits. And quietly slumped over shirtless in a chair on the other side of the room... Peter Steele. After Jerry introduced me to him, Peter handed me the bottle of whiskey he was nursing and said, “Drink!” Happy to oblige, I took the bottle and started chugging. “WHOA!” exclaimed the man in his trademark baritone before taking the bottle back. Following that memorable introduction, we got to chatting. Since I knew that Peter had roots in the New York Hardcore scene (including writing lyrics for Agnostic Front's classic Cause For Alarm album), I mentioned that I had recently been in touch with Raybeez from Warzone to book the band for a hall show I was putting on in New Jersey the following month. Peter's eyes immediately lit up, and he asked me to make sure I told Ray that he said hello the next time I talked to him. Later, I asked Peter to sign the only thing I had on me at the time – the back of one of my business cards for “Joel Gausten Productions,” which was the name I went by when I used to book shows. (I've moved multiple times in the last 20 years; to the best of my knowledge, that card is currently boxed up - along with a bunch of other personal items - in my family's storage place in the Midwest. I really need to get out there one of these days!)

Although some (hell, many) details of this evening are a blur due to the fact that I was drunk as a skunk for most of it, I do recall Peter being incredibly friendly and quick to make me feel welcome. (He even offered me some of the porn that was scattered around the room!) Later that night, I went with The Misfits somewhere to check out a building (a barn?) that they had converted into what looked like a mad scientist horror movie set. I could be wrong, but I think this is where they shot some of footage for the Chiller Theatre/Fiend Club show they were working on around this time. (This is why I no longer drink when I go out. Memories and details are more important to me than hangovers.) Anyway, it was an incredible night, and I'm forever grateful to Jerry for inviting me along for the ride.

A lot has happened to that evening's cast of characters in the last two decades. The Misfits' “reunion” lineup lasted five years before imploding, with Graves spending subsequent years releasing an array of intriguing albums. Doyle, who apparently forgave Danzig for the hotel incident, has been touring with the original Misfits frontman on and off for the past decade or so. Jerry's currently on the road with a new version of The Misfits with his son of guitar, while Chud has maintained a decidedly low profile in recent times (with the release of his limited-edition doll being a notable exception.) Sadly, Raybeez died less than two years after I passed along Peter's well wishes to him.

Of course, the biggest thing that hits me when I look back on this night is the fact that Peter Steele is no longer with us. Twenty years ago, I saw a frontman and band at the absolutely peak of their powers, quickly building a legend that has only grown in relevance with each passing year. It's a shame it all ended so tragically. A lot of been said about Peter, but here's what matters: That guys was fucking brilliant, and he left the building too goddamn soon. (Just listen to “Love You To Death” off October Rust. Only a truly special soul could create something so powerful.)


With Peter's mortality in mind, I'd like to publicly send this message to Jerry and Doyle:

It's been 20 years since The Misfits came back from the dead, and more than 30 years since your last show with Glenn. Time is nobody's friend. Peter's gone. Raybeez is gone. Dave Brockie is gone. We're all going to end up there eventually. You guys and Glenn are still here and breathing. Please, do it before time steals your chance.

Happy Halloween and all the best -