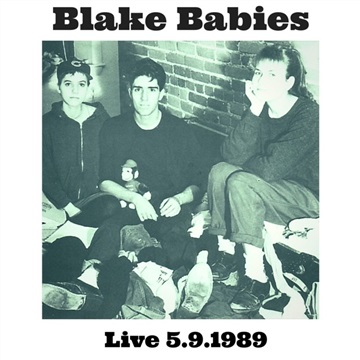 ...And with a free memento from decades past, The Blake Babies were reborn.

Anyone who loves and remembers The Blake Babies and the amazing music they produced from 1987 to 1991 (and again from 2001 to 2002) should take the time to check out the Massachusetts band's official spot on Facebook. Last May, the long-dormant page sprung back to life with a message that the group “was going through a bunch of amazing live videos from the '80s for our Pledge/reissue campaign coming later this year.” Since then, a number of intriguing visuals have appeared on the space, ranging from old flyers unearthed by Lemonheads co-founder Ben Deily to photos that tease of treasurers from the vaults. Then, in the third week of October, the band – bassist/singer Juliana Hatfield, guitarist John Strohm and drummer Freda Love Smith – offered up a free download via Noisetrade of a 1989 live set from Emerson College's WERS. The release was preceded by the publication of Smith's memoir/recipe book, Red Velvet Underground, and followed by the band's first interview in more than a decade. Before all of that, Hatfield made plenty of headlines in the first few months of 2015 by delivering the best album released so far this year. While these things have led to an air of excitement around The Blake Babies' unexpectedly active present and hopeful future, Live 5.9.1989 celebrates the band's glorious past.

The WERS recording (often including a brief post-show interview with the band) has been floating around the Internet for a couple of years now, but this is the first time to this writer's knowledge that these live renditions have been made available with The Blake Babies' official stamp of approval. Despite the absence of the band interview, this group-sanctioned version is an intriguing listen from beginning to end. The WERS gig saw the band settling into their best-known, three-piece lineup following temporary flirtations with fourth members including early bassist Seth White (who played on the band's 1987 debut, Nicely, Nicely) and Lemonheads frontman Evan Dando (who added bass and backing vocals to the band's 1989 Slow Learner EP). It also represents a good chunk of music that would turn up later in '89 on Earwig, one of the most perfect albums The Blake Babies – or any other band, for that matter – ever created.

Naturally, any live band stripped down to a trio needs to rely on the actual songs to carry the show. Thankfully, Live 5.9.1989 proves that The Blake Babies' songwriting was up to the challenge. Strohm's guitar shimmers throughout the 11-song set (take a listen to the sterling “Don't Suck My Breath”), while Hatfield and Smith succeed in their less-is-more musical approach. Highlights include the Goth-tinged “Dead And Gone,” an early version of the Sunburn track “Look Away” and a fantastic take on the Earwig highlight “You Don't Give Up.” (By the way, am I the only one who thinks the second half of the song could have sonically fit somewhere on The Cure's Seventeen Seconds?)

Of course, this is a live radio recording of a still-developing band, so listeners should not expect a pristine affair. Smith's tempos often fluctuate, while Hatfield's obvious shyness is matched in many spots by a noticeably shaky voice. But these minor quibbles don't take away from the enjoyment of this collection – a document of a band only months away from releasing one of the finest albums of the 1980s. It's so wonderful to know that this live recording survived. These are truly gorgeous songs; it's a joy to hear them in this preliminary context.

While it is unknown if any of the current buzz surrounding The Blake Babies will materialize into an actual reunion on stage or in the studio, Live 5.9.1989 allows new and old fans alike to experience an exciting era of a band that left us too soon (twice!) and maybe – just maybe – will be sharing their magic with us all again very soon.