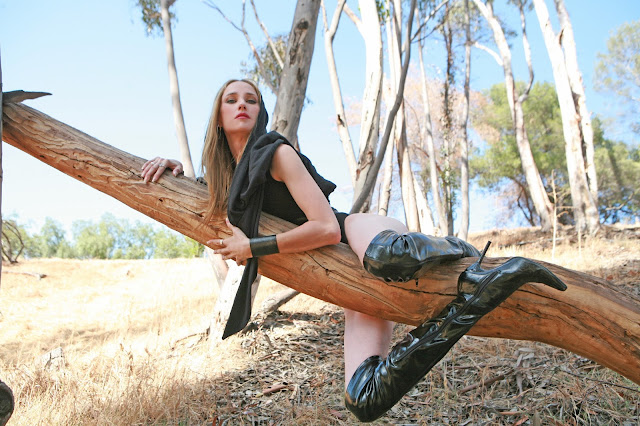 Imagine fronting one of the most esteemed and successful new Metal bands around while fighting the ongoing urge to take your own life.

This is the struggle in the heart of Huntress frontwoman Jill Janus. While the past six years have seen the California band gain an international following, Janus has experienced a life fraught with a variety of psychological issues including schizophrenia. At one point, Janus' mental disorders led her to become a topless DJ named “Penelope Tuesdae” and pose nude in the April 2004 issue of Playboy. Even as Huntress' career took off, the Opera singer-turned-Metal priestess still struggled to overcome her inner turmoil. The process of recording the band's recently released third album, Static, saw her overcome various hospitalizations and suicide attempts. Not surprisingly, the album's deeply personal lyrics detail the Hell she went through to simply stay alive during the album's creation.

Just as Huntress reached the finish line with Static, Janus was diagnosed with uterine cancer and underwent a hysterectomy. With Static finally completed and awaiting release, Janus revealed all in the August/September issue of Revolver, offering insight into her long-running struggles for the first time. Of course, these revelation left many Huntress fans wondering how the trauma surrounding the band's singer would ultimately impact what they were about to hear on Static. Fortunately, the obstacles that Janus and her bandmates faced only served to intensify their output. Fiery from start to finish, Static is not just the latest album from one of the most powerful bands on the scene today - it is a statement on strength and survival under horrific circumstances. Instead of hiding her battles from the public eye, Janus uses Static to air her journey and stand before the world as nakedly honest as possible. That, dear reader, is fucking Metal.

I recently had the pleasure of connecting with Jill for a frank discussion on the making of Static, the response she received to the Revolver piece and the current state of her mental and physical health. Jill is an extraordinary person, and I wish her peace and strength as she moves her life forward.

The release of Static follows some very intense revelations from your personal life. It’s rare to have someone in the industry be so honest about the things you've opened up about. What kind of feedback have you received from friends, family and fans since words got out about the Revolver interview?

Honesty is something I’ve preached for years. No matter how brutal the truth is, I prefer to have it out there rather than people weaving lies about my life. I’m no stranger to sensationalism, but so far, I’ve received only amazing support from fans and the Metal community.

One of the most admirable things about what you have revealed about yourself is the fact that you are succeeding in a very difficult profession despite having these obstacles. How have your bandmates in Huntress been able to not only understand these issues, but help you through them?

The things I’ve achieved with Huntress, under these very difficult circumstances, would not be possible without the support from my bandmates. When I first began touring in 2012, I was terrified that my band would implode because of my odd behavior. It nearly did fall apart with relentless touring and my drama. But the opportunities kept coming, and I had to learn how to control myself, which I still struggle with. It’s always a challenge, but the vision keeps me going.

On a lighter note, your PledgeMusic video was brilliant. How important is humor to what Huntress does?

There has been so much darkness in my life that the only way to stay alive is with humility. I’m very serious about my career, yet I never take the small stuff to heart. I see the big picture and I want longevity. Huntress likes fun; we’re all having a blast when things are running smoothly. Humor is vital to my existence. I’m not politically correct, which I catch fire for sometimes, but I just do not give a fuck what others think of me.

Considering that you are a trained Opera singer, why does singing heavier music with Huntress appeal to you as a career choice?

I’m a very versatile vocalist and I love expanding my abilities. Growing up with bipolar disorder came with violent and aggressive behavior. I spent years fighting with directors and actors, always wanting to run my own show. I was a nightmare, quite the little diva with a massive ego because I had a rare four-octave range by the age of 13. I’m a coloratura soprano. Metal was so appealing to me because the aggression and interesting compositions made my brain calm. Black metal is the most soothing music to me. Metal saved my life.

Of all the songs on the album, why was “Static” the one that ultimately became the album title?

'Static' was the first song idea. I wrote it in a rest stop bathroom on tour. All three Huntress albums start with an “S,” which I had planned since signing with Napalm Records. The triple S. It all ties in with numerology and reveals instructions to the Stargate. 'Static' represents the world being controlled by a monster who exists within electricity. Eating up brains, turning you into a Zombie of the Noise, thriving off mediocrity. Kinda like the state of humanity today. 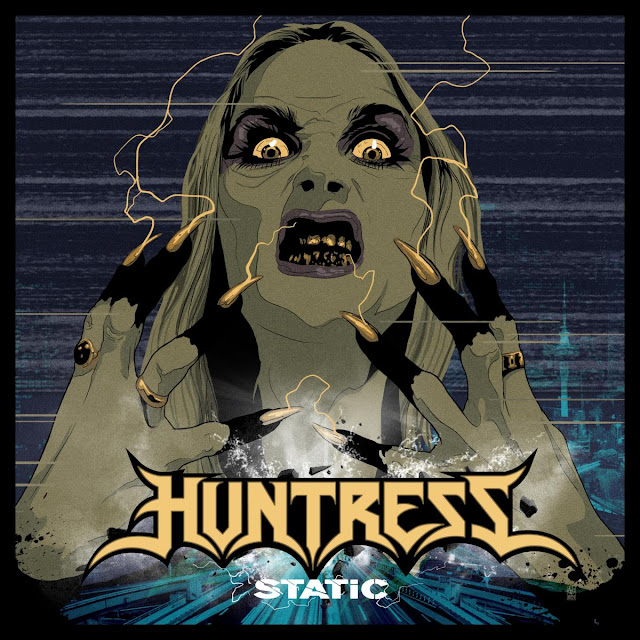 Which song on the album was the most cathartic for you to write? Which track was the most difficult to create in terms of expressing what you wanted to with your lyrics?

'Mania' was probably the most cathartic. It’s inspired by my intense bipolar mania, which nearly killed the band. This particular disorder has affected [guitarist] Blake Meahl the most. He’s the closest to me and has pulled me out of the deepest, darkness caves of my insanity. I wrote it for him, really.

It's clear that music has helped you overcome some of the issues you experience in your private life. What are some other ways you are able to find peace when things become difficult?

Cognitive behavioral therapy is a great tool, getting me out of potentially bad situations before they start. I’m also medicated. Some people try to avoid meds, but I have no other choice. I will be on psychiatric medication for the rest of my life. Luckily, it’s finally stabilized me after 20 years of trying.

What advice would you offer someone – especially a younger listener – who might be facing or acknowledging his or her own mental issues for the first time?

I’m not one to give advice; I’m still figuring it out! But one thing that is vital to my existence is sobriety. I am a raging lunatic if I drink or abuse substances. I have come close to being arrested, and drinking has caused me to be placed on 5150 holds in county psych wards. However, I’m not a purist because I do smoke marijuana to ease acute anxiety and drink the occasional shot of  Jägermeister, the only liquor I will ever enjoy again. Huntress is partnered with Jäger Music for a reason. It’s not only a great sponsorship; I find a shot of Jäger medicinal after a show. I found out what works for me, but I know many people with duel diagnoses like alcoholism and mental illness, and the only thing that works is strict sobriety.


Your past as “Penelope Tuesdae” has been covered quite a bit in the music press in recent years – with some of it being rather condescending and sexist. How do you respond to those Metal fans who might negatively judge this era of your life and pass Huntress over as a result?


I don’t respond to them ever! I keep my goals away from trolls. Sensationalism has always followed me. I chose to share very personal struggles when we completed the third album, Static. I have calculated my moves since the beginning of Huntress, all of the albums leading to the absolute truth. Penelope Tuesdae became another identity - not a persona, an identity that replaced me for years living in New York City. She made choices I never would have, the most brutal is coming out of a manic state to discover I had breast implants. I don’t remember the surgery, payment, nothing that had happened a month earlier. I did have friends looking after me; I call them 'keepers' who remember details, but I’m uncontrollable when I want something. My family took me home; I spent time in Bassett Hospital in Cooperstown, NY. I was diagnosed with dissociative identity disorder [DID] and schizoaffective disorder, which developed into schizophrenia. I’m an uncommon success story; I’ve survived with no health insurance for most of my life in the worst possible mental states. But music has always brought me back to sanity, even if it’s fleeting.

As a result of your recent Revolver interview, it is possible that fans will be paying greater attention to your lyrics than ever before. Ultimately, what is the message or vibe that you most want listeners to walk away with after listening to Static and experiencing your words?

Every album in the Huntress Trilogy, the first three albums on Napalm Records, represent three phases of the Triple Goddess – Maiden, Mother, Crone. I waited until the Crone phase, representing wisdom and death, to unleash all these very personal things. I was possessed by this nasty, evil cunt who was a version of the Crone; I had violent, terrible mood swings and hallucinations writing Static. I was hospitalized at least three times during the process and attempted suicide twice. Blake literally saved my life. Then, on the final day of recording vocals, the Crone left my body, but within my womb she left her disease. I was diagnosed with Stage 1 uterine cancer during the recording of Static; the lyrics hold so much of my anguish. I was often crying in the vocal booth. It was brutal. I delayed surgery and had a hysterectomy on June 29. I’m now cancer-free. The vultures can wait.

*Some portions of the above interview were edited for clarity.