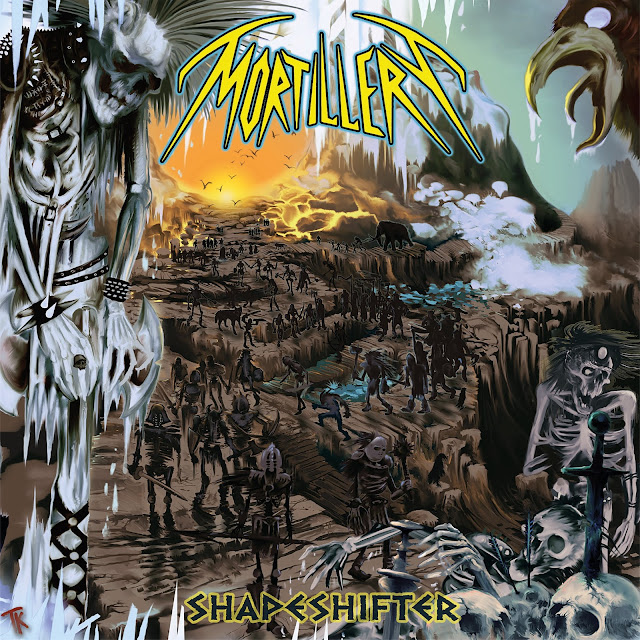 True Thrash is alive and well in Canada.


Based in Edmonton and fronted by raging singer Cara McCutchen, Mortillery have just delivered one of the strongest Metal albums of the year with their bulletproof third release, Shapeshifter (Napalm Records). A band that clearly knows and respects history, Mortillery hit the listener over the head with a sound and power reminiscent of classic mid-to-late ‘80s Thrash. If Détente comes to mind faster than Deftones when you hear the word “Metal,” then Shapeshifter is the album for you. I recently had a chance to touch base with Cara for a chat on the new album and more.

What was the band’s ultimate goal going into this record? What were the biggest things you learned from your experience creating the previous two albums that you brought to Shapeshifter?

I think that our ultimate goal going into this record was to do whatever comes naturally to us. We have been really lucky, I think, in the way that our songs just come together without too many speed bumps. Every time we go into the studio, we all improve musically in different ways, so I think that Shapeshifter is just another step forward in our journey as a band.

The band has had a few lineup changes over the years. What makes this current combination of members work so well?

It may sound strange, but I think it is our differences that make us work so well musically. Individually, we are all very different as far as our personalities and our interests go, and I think that really gets reflected in our music. It keeps things interesting.

You’ve been with Napalm Records for four years now. How has that relationship most impacted what you’re working to accomplish with the band?

Napalm Records has done so much for us. All we really want is to spread our music around the world and perform in as many places as we can. Napalm has really helped us accomplish this, and we are grateful.

Your bio mentions Détente as an influence, which is interesting because that band – and Dawn Crosby in particular – don’t normally get their deserved level of recognition. What makes Detente stand out to Mortillery?

The aggression of the music and the melody of Dawn Crosby’s voice are somethings we like to bring forward. Totally underrated band. I think people seem to forget how important Punk bands are and how much they have influenced this and other genres of Metal.


You have a lot of dates in Europe coming up. Where are your favorite spots to play? What are your plans at this point to play the states?

My personal favorite place so far is Austria. It is absolutely beautiful. Poland also…The last time we got on stage, people were bleeding within five minutes from thrashing around so hard! We all really want to play the states. We are neighbors, after all! No exact plans yet, but if a tour that works for us pops up, I'm sure we will start packing our bags.

(Former Death manager) Eric Greif handles the legal side of things for Mortillery. What’s it like having someone with such a heavy history involved in the band?

It is truly an honor to have him on our team. He is so knowledgeable and patient with us. Signing a record deal and touring to other countries is heavy document-wise, and we really would not be where we are at today without him sorting things out for us.

Shapeshifter definitely has a strong traditional Thrash influence. What keeps this kind of music going year and year? Why is old-school Thrash seemingly immune to trends?

I think it's because it's fun and super high-energy. I love all kinds of music, but there's a time and a place. Death Metal when I'm pissed off, Black Metal when I'm sad and so on. Thrash brings people together to have a good time and forget about the day-to-day life that we live. I think Thrash also has a very diverse crowd. Most Black Metal/ Death Metal/ punks / new parents/ mailmen say, 'Hey! Are you listening to Anthrax? Fuck, I love Anthrax! I remember back in the day…' You know how that ends.

How does Mortillery define success? Where do you want to see the band in five years’ time?

Success for me is when someone from a random city/country that I've never met says, 'Hey! Aren't you the singer for Mortillery? You guys are awesome!' That's all I need. If that still happens in five years, I'll know that I did well. For me, I just want to play all over the world. So in five years, I'd like to see the band kickin’ it on a tour bus.