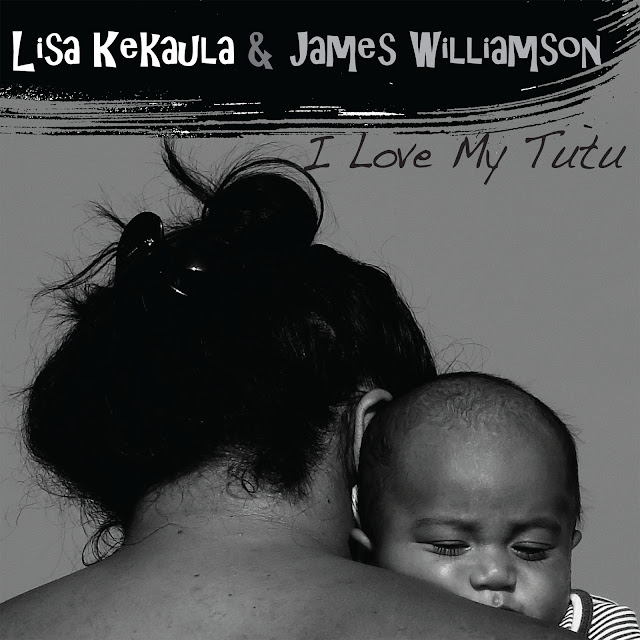 What do you do for an encore after you release the best album of 2014? You put out a children's single, of course!

Tomorrow, Iggy and the Stooges guitar legend James Williamson will release a new digital single, “I Love My Tutu” / “Never Far From Where The Wild Things Are,” with the extraordinary Lisa Kekaula of The BellRays on lead vocals. Although geared towards younger audiences, the two tracks (also set for release as a seven-inch single on August 12) offer a fun listening experiences for people of all ages and usher in a fascinating new chapter in Williamson's storied career.

“I Love My Tutu” is a fun “Jawaiian” song about the relationship between grandchildren and their grandmothers, while the rocking “Never Far From Where The Wild Things Are” is inspired by the book Where The Wild Things Are. Williamson handles bass and ukulele in addition to guitar, while Kekaula's niece and nephew join the always-stellar Petra Haden in providing backing vocals. Drums and keyboards are handled by Michael Urbano (Smash Mouth) and Gregg Foreman (Cat Power), respectively. Kekaula, Haden, Foreman and Urbano previously worked with Williamson on Re-Licked, his 2014 collection of modern studio recordings of Stooges tracks originally written with Iggy Pop in 1973-74.

“Urbano and Gregg Foreman are like my go-to guys for rhythm tracks,” Williamson says. “I just loved working with them [on Re-Licked]. Urbano’s rock solid, and Gregg Foreman brings something to the party. As far as the singers go, this particular [single] is with Lisa not only because she’s just an incredible, talented singer, but also because the A-side is a kind of Hawaiian - or Jawaiian - style song, and Lisa is part Hawaiian, so she had the pedigree to pull this song off. She did a fantastic job on it. She’s versatile enough to wail out on the B-side, which is kind of a rocker. She was the perfect choice for this record.

“I’ll always use Petra if I can, because her voice is so great,” he adds. “In fact – and you’ve heard it here first – the next single [I'm going to release] is actually with Petra, because I’ve always wanted to do a record with her as the lead vocalist, not a backing vocalist. Hang tight; in August, that one should drop.” 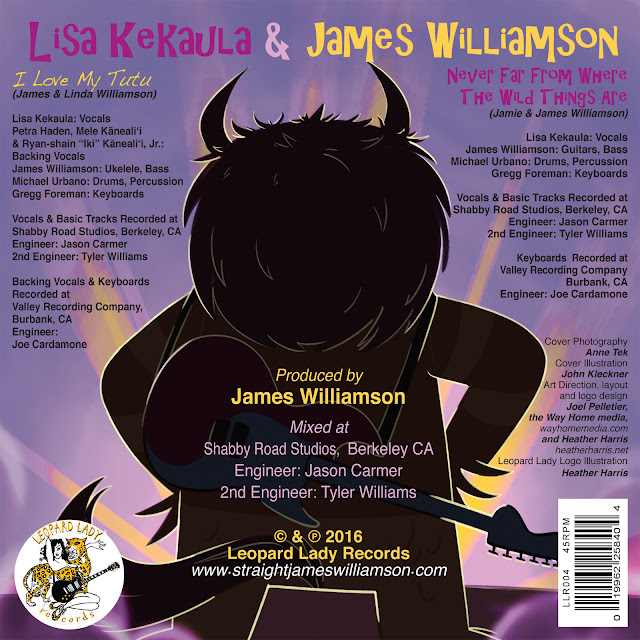 An avid visitor of Hawaii for decades, Williamson has chosen to donate the new single’s profits to Project Hawai'i, who assist homeless children in the state.

“It’s patently obvious when you go to Hawaii, especially certain parts, that they have a huge homeless problem,” he says. “The big island of Hawaii probably has the largest homeless population of anywhere. I started to become aware of the fact that along with that problem comes a lot of homeless children. That's especially gut-wrenching, because they’re caught in the circumstance through no fault of their own. Frankly, every [homeless] person is to some degree… I just became aware of that particular program, which is very positive. They’re taking steps to keep reinforcing these kids to try and lead a better life.”

In addition to serving a great cause, the new single is also a family affair for Williamson, who wrote “I Love My Tutu” with his wife, Linda, and "Never Far From Where The Wild Things Are” with his son, Jamie. Their presence on the record is interesting in light of the fact that the Williamson household was once as far away from Rock ‘N’ Roll as it could get. After retiring from the music business at the dawn of the ’80s, he became a Silicon Valley executive thanks to his work in the electrical engineering field, eventually landing a position as vice president of technical standards for Sony.

An early retirement buyout from the company in 2009 coincided with an invitation to re-join The Stooges, who had initially reformed in 2003 with the late Ron Asheton (1948-2009) on guitar. But up to that point, there was nothing in Williamson's life and work in the corporate world that would have tipped his son or daughter, Elizabeth, off to what he had experienced and accomplished in his past life as guitarist in one of the world's greatest bands. So what was it like for them once dad strapped on his guitar and hit the stage with The Stooges for the first time in ages?

“It was a bit of an adjustment,” he reveals. “On the one hand, it was something kind of cool, like oh my God, old dad is all of a sudden a rock star! (laughs) Of course, my wife always knew that; she knew me back in the day, so it wasn’t anything new to her other than I started having to tour and so forth, and that took up a lot of time. But it had its benefits; she could kind of cherry-pick the nice places she wanted to go to that were on the tour. The kids also got to benefit; you get some bragging rights and get to go to some shows and enjoy all the trappings of the whole thing. On the other hand, I think they had to sort of relate to me slightly differently. But I think overall, they enjoyed it and it was a positive thing.”


Of course, much has happened in the world of The Stooges since Williamson made his return. The great Scott Asheton died in 2014, while saxophonist extraordinary Steve Mackay passed away last October. With Iggy currently riding high with a hit solo album (this year’s Post Pop Depression) and Williamson involved with his own projects these days, does the guitarist see a future with his longtime cohort, whether it’s under the Stooges name or in a different capacity?

“I doubt it,” he replies. “The Stooges is over. Basically, everybody’s dead except for Iggy and I, so it would be sort of ludicrous to try to tour as Iggy and the Stooges with only one Stooge in the band, and then you have side guys. That doesn’t make any sense to me. And frankly, I don’t want to tour anymore; I’m kind of done with it. I also feel like we’re getting a little long in the tooth to be doing these show anymore. I know he does them, and people seem to like them. That’s fine, but I feel like I don’t want to beat it into the ground. In 2013, we were still kind of kicking butt on stage, and I think we could hold up to most bands – young bands, in fact. But these days, I think it’s more of a memory than it is a reality. I’m good with not doin’ nothin.’ By the same token, I still feel I have some music left in me, so I’m enjoying doing these little projects and putting them out there for people.”

These “little projects” for the rest of the year include the aforementioned single with Haden on lead vocals and a third single with a singer Williamson describes as “someone entirely new that you have never heard from before – a fresh, young talent.” His focus on releasing singles is as much an aesthetic interest as it is a creative one.

“I think singles have a kind of purity to them because they’re very focused,” he offers. “There’s usually no fat in them, if you will. They’re either very good on the A-side and the B-side, or a least good on the A-side. They have a lot of effort put into them, and usually people who take the time to do that will make a good cover and so on. You get a concentrated effort versus albums, where you’ve got maybe two, three, four good songs if you’re lucky, and then there’s a lot of filler. On the other hand, I do plan on doing a lengthier piece – an EP or LP – later in the year, but we’ll see how that works out.”

After earning his place in Rock history more than four decades ago with Iggy and the Stooges' Raw Power and making an unexpected return to the international spotlight at an age when most people consider retirement, Williamson is now enjoying the freedom that comes from conceptualizing and releasing music under his own steam.

“It started out that I just wanted to get the songs [on Re-Licked] out there that we had written back in the day,” he says. “I just wanted to see the material that we had planned to do as a follow-up to Raw Power see the light of day. It wasn’t going to happen under the Stooges banner for a lot of reasons, most of all was just the comparison between us old guys and the younger guys who created that music. But in assembling a mixed bag of young and old and various really talented people, I think it did see the light of day in a great way. I really felt that the enthusiasm that those people brought to that album was really palpable. So I guess that was the beginning of that. Everybody always wishes they could have done something this way - or they would have done it this way and they were sorry that it got done that way and so on. I’m no different, although I’ve been a little more fortunate than most people in that I usually produce everything I’ve ever done except for Raw Power, and I have a lot of control over it. In a way, everything I’ve done has been mine. I’ve been gratified to continue in that vein with these newer projects and work with a variety of people. That’s the fun of it for me.”