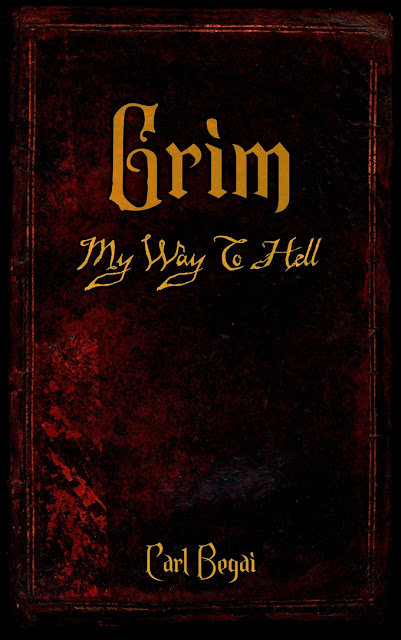 For more than two decades, Carl Begai has been a leading voice in Metal journalism. Whether he’s reporting on acts all over the world for BraveWords.com/Brave Words & Bloody Knuckles (BW&BK) or offering various musings on CarlBegai.com, he consistently provides an in-depth, unpretentious and often amusing take on the world of music. Now, he is preparing to steer his work in a GRIM new direction.

Boasting cover art by former BW&BK graphic artist Hugues Laflamme, GRIM - My Way To Hell is Begai's first work of fiction and his first book since 2008’s Fire and Fame (with Bonfire’s Joerg Deisinger). He has been “dabbling” with GRIM since 2011, when he was inspired to start putting words together after watching The Devil’s Advocate with Al Pacino. In one pivotal scene, Pacino – in the role of The Devil – delivers a powerful speech on how God is “an absentee landlord” when it came to caring for humanity.

“That is my favorite Pacino moment,” Begai says. “That’s where the idea of the book came from.”

Fans of Begai’s work received their first tease of GRIM when he posted the book’s prologue on his website in 2012.

“The premise behind the book is that the world is such an ugly place and Hell is so busy that they decided to outsource in order to collect all the souls that need collecting. One specific guy more or less got sucked into doing the job, which goes against his own morals. He has real issues with that, and he has real issues with the idea of Heaven and Hell – plus the fact that people are looking for an easy way out by being willing to sacrifice their souls. It’s a first-person take on this seemingly ludicrous idea of God and the Devil, but it turns out that it actually does exist.”

Sounds pretty deep and potentially scary, but Begai was quick to note that he has maintained his sense of humor throughout the manuscript process.

“If you know anything about me, you know that it’s certainly not 100-percent serious. There’s a tongue-in-cheek aspect to this.”

Considering Begai’s reputation in the music industry and past experience as a book co-author, it might be a surprise to some that he has decided to go the self-publishing route for GRIM. But as those of us who’ve been down this road ourselves know very well, flying solo certainly comes with its fair share of advantages and opportunities.

“When we went looking for publishers [for Fire and Fame], the general message from most of the ones we approached as far as what they would or would not for an upcoming author was, ‘Well, we’ll sell between 3,000 and 5,000 copies of you book, and then we’ll start paying you.’ And then, it would only be $1 a book. We all know they’re not going to sell between 3,000 and 5,000 copies, so you get nothing out of it other than a pat on the head, basically. I figured that crowdfunding could possibly raise money for advertising and stuff, and I could go that way. It is an industry now as opposed to just a bright idea.”

The first thing you’ll notice when visiting Begai’s Kickstarter page for GRIM is that the video trailer accompanying the campaign has actual (and pretty damn cool) production value. Begai’s decision to incorporate such impressive visuals stemmed from a difficult lesson learned during Fire and Fame.

“The last book tanked because it wasn’t promoted properly,” he admits. “When I stated talking to people in the publishing industry, they said one of the things to do was have a video presence out there – whether it’s a video interview or something else. That’s where people are looking. The guy who was in charge of the previous project never went for it, and I really believe that was detrimental to the whole thing.”

Conceptualized by video director Andreas Spitz, the 76-second clip boasts music by Sander Gommans (After Forever/Trillium/Anna Phoebe) and a voiceover by the incomparable Amanda Somerville (Trillium/Avantasia).

“The music really kicked it all off,” says Begai of the video’s creation. “I was in Holland visiting Sander. He knew about the book in its early stages, and he was going, ‘Yeah, man! We can make an album around it! We can take the concept and make a CD!’ I looked at him like, ‘Yeah, that’s a little bit ambitious. I don’t even have the book complete yet!’ Several months later, I began thinking about it and asked him if he would be interested in writing me a piece of music. He asked me what I wanted, and I explained what I was looking for in terms of mood. Like 10 days later, he got back to me and said, ‘What do you think?’ He divided the piece into three parts; it just kind of fit everything perfectly. It basically called for a voiceover, which I gave Amanda the text for and said, ‘Do what you do.’ What you hear in the voiceover is this wonderfully intense but slightly sarcastic delivery from her, which was done in between two rehearsals, a tour and being a mom. It was ridiculous; she was on tour with Avantasia or something, but she knocked that out in an hour or so. She was great.”

Begai’s out-of-the-box approach to Kickstarter extends to the premiums offered in his campaign. Folks who support GRIM can walk away with goodies ranging from the book stored on an official GRIM wooden cross-shaped USB stick to caricatures drawn by the man himself.

“I look at some of the rewards [on other Kickstarter pages], and I’m like, ‘Okay…’ You get the product and then they’ll give you a freakin’ sticker or something. So I thought, ‘Well, why not just make it as ridiculous or as fun as possible?’ That’s what it comes down to. If you’re going to reward somebody for spending their grocery money on your book, give them something to laugh at; give them something to enjoy along with the actual product that they buy. Of course, I will seriously try my best to do a caricature, but I certainly don’t promise that it’s going to be good. In fact, I can guarantee you that it won’t be any good, but I’ll do my very best!”

After building an international reputation in the Metal community, Begai looks forward to entertaining new and old readers alike with GRIM.

“I don’t know if it’s bad if you enjoy your own writing, but I do like what I’ve written, and I do want to share it with people and just have fun with it. Am I going to be the next John Grisham or Stephen King? Not a bloody hope in Hell, but it’s fun to at least poke things in that direction, I suppose.”