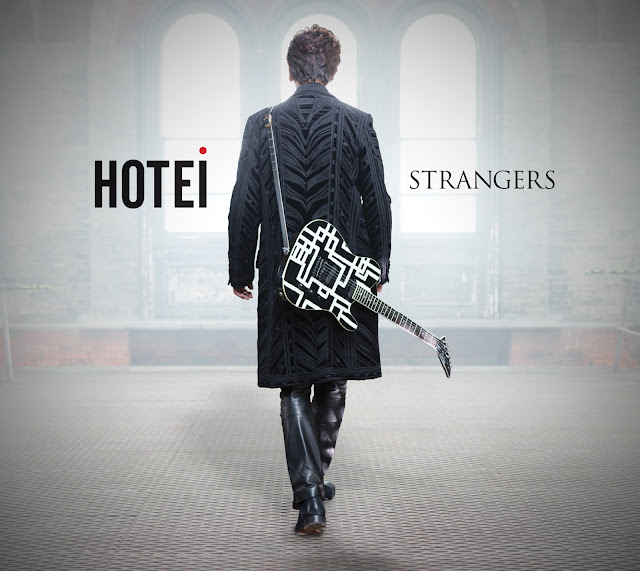 When you're offered an interview with someone who's sold 40 million albums, you say yes.

Easily the most successful solo artist to ever grace this website, Japanese-Korean guitarist Hotei (pronounced '”HOE-tay”) has sold more than 40 million records in Japan alone. When The Rolling Stones played in front of 55,000 fans at the Tokyo Dome in March 2014, Hotei joined them on stage as a guest guitarist.

Take a minute to let that sink in.

Best known to US audiences for his original song “Battle Without Honor Or Humanity” (which was made famous by its inclusion in Quentin Tarantino’s Kill Bill), Hotei is about to hit our shores in a major way with the American release of his latest album, Strangers. Out this Friday on Spinefarm Records/Universal, Strangers features a jaw-dropping array of guests including Rammstein's Richard Z. Kruspe, Bullet For My Valentine’s Matt Tuck, Noko from Apollo 440 and acclaimed Texan singer Shea Seger.

Oh yeah, and two songs have vocals by some guy named Iggy Pop.

“I had a vision of Iggy when I was working on the demos,” Hotei explains. “It was my dream. I tried to approach him directly through his network, and somehow a dream came true.”


Another figure who helped shape Strangers was famed producer/Killing Joke bassist Youth, who added his unique touch to the opening track, “Medusa.”

“[Hotei] is an amazing artist and guitarist,” Youth says. “He is a huge star all around the world, especially in Japan. He jams on stage with the Stones, and he's got Iggy on the album. He's up there. He's a really lovely, humble guy to work with, yet super focused. He makes this dynamic, exciting music that makes you feel like you're in a movie in some futuristic retro, William Gibson Tokyo dystopia. Can't ask for more than that!”

“When I produce myself, I tend to neglect my identify as an Asian,” offers Hotei. “But Youth in particular was really good at reminding me who I am, and he managed to pull out what was forgotten deep down in me and put my identity into the sound… I love him; he’s such a nice guy!”

American listeners who enjoy Strangers have an opportunity to experience Hotei's magic in person when he plays The Troubadour in Los Angeles on July 13 and the Highline Ballroom in New York City on July 15.

“The upcoming American dates are a showcase,” he explains. “A lot of people might think, 'Oh, this is the legendary Japanese guitarist coming to perform in the US.' But I want people to look for and expect to see not just another guitarist, but something very enjoyable and unexpected. I’ll be going to America with two former members of Apollo 440. It’s a minimal formation, but I’m aiming to create some modern guitar dance music that I’m convinced everybody’s going to enjoy. This is going to be the very first step to entering the American market, so I don’t want to look at it lightheartedly. It’s a very, very important step forward.

“Opening the door to the American market was a longtime dream in my career and life,” he adds. “I’m thrilled that this moment has finally come. Having said that, America is a huge country; it doesn’t happen overnight. I am committed to making as many trips as possible to approach many people in many regions. But at the same time, I understand that I need to learn American English first.”

Although Hotei is synonymous with Japan, he has lived in London since 2012.

“I lived in Japan comfortably for so long, but London consists of so many different backgrounds of people,” he says. “I can feel the world much closer, which is something I’m enjoying.”


In June, some of the strongest moments in Hotei's 35-year career were released as 51 Emotions, a three-CD Japanese release that showcases his sonic evolution over the years.

“Of course, if the song came from the very beginning, it sounds very premature. But it was a first step; without it, I would not be here. Those people who are introduced to me through Strangers may look at these 51 songs are bizarre and interesting, but those people will see my progress.”

Last year, Hotei made a guest appearance on Gang of Four's What Happens Next, adding guitar to the track “Lost Souls.” Initially hitting it off with Gang of Four leader Andy Gill when he was asked to interview him for a Japanese magazine, Hotei later had an unforgettable experience with the Post-Punk progenitor in the studio.

“Because both of us sounded so identical, we both questioned, ‘Who’s doing which part now?’ That’s how close we were. That’s a representation of how much I have been influenced by Gang of Four and Andy Gill.”

While 2016 has been a momentous time in Hotei's career, it has also been a time of sadness. Like scores of other music fans around the world, he took the January death of David Bowie hard. Hotei became friends with the legend in the '90s, later joining him on stage at the Nippon Budokan in 1996. The sense of loss in his heart was still palpable seven months after Bowie's passing.

“David was the most influential person, not just for his music style, but for his spirit. Through my dealings with him, I learned that he was always changing and always hungry for something to conquer. I had him as a hero, and then I was able to perform with David on stage. When I learned that David passed in January, I was literally devastated. If I could ask for one favor, I would really like to stand on the stage together with David.”

Bolstered by one of the best albums released in America this year, Hotei is ready to win over the US the same way he amazed his home country – by creating music with his heart, not his head.

As he says, “I never wanted to become one of those technically skilled guitarists; I wanted to use guitar as a tool to move people’s passion.”