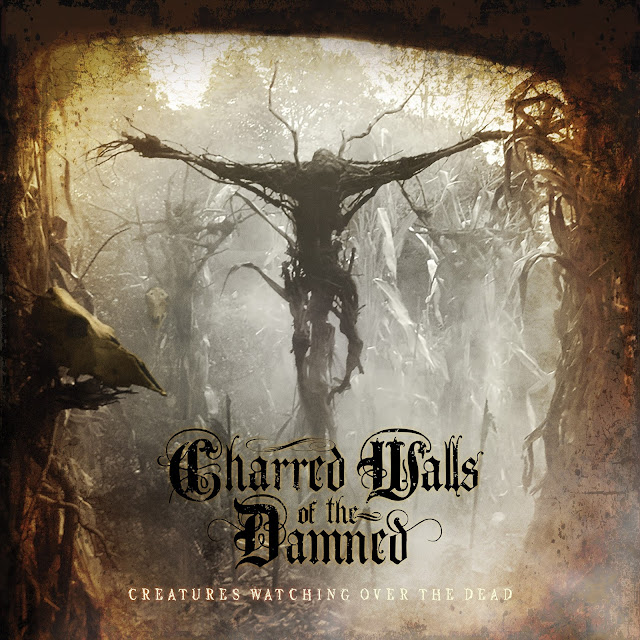 Millions of radio listeners know Richard Christy from his work on the legendary Howard Stern Show, but Metal fans and serious drumming aficionados know him as one of the most innovative players in the genre. Already a major player in the underground music scene for his work with the mighty Death long before he joined Stern and Co., Christy has continued to solidify his reputation through his ongoing project, Charred Walls of the Damned.

“Jason produces so many bands; I think that’s definitely influenced him,” Christy says. “Jason’s a big part of our songwriting. I write all of our music and play everything on our demos. Then, Jason and I get together for pre-production, and he has a big hand in shaping these songs. I think the more experience he gets in the studio, the better songwriter he becomes. I think that’s definitely evident on this new album. I think we’ve done our best job of just writing really catchy, melodic songs. It’s like anything; the more you do it, the better you become at it. After doing two albums, I kind of know exactly what we need to do to write good songs now. We kind of have our sound now, and I know what people are kind of expecting to hear. From experience comes better songwriting.”

Longtime fans of Owens’ bulletproof voice are in for another treat on Creatures Watching Over the Dead, which features some of his most powerful performances to date.

“Tim’s voice is so strong now because he tours so much. A lot of times, we’ll record our albums after we’ve been on tour, and his voice is just incredibly strong. When we did this album, the vocals just took four days. His voice never went out on him once; he never got hoarse.”

Of course, Christy’s vision for Charred Walls of the Damned is also helped along by the ongoing involvement of one of the genre’s greatest bassists.

“I’ve been playing with Steve for a long time. I don’t know if a lot of people even know that back in ’97 when I first joined Death, he flew to Florida and played on demos for [1998's] The Sound of Perseverance. I was like freaking out when I met him because I’ve been a fan of his playing since Sadus, and [Death’s 1991 album] Human was probably my favorite Metal album of all time – although the bass was a little hard to hear on it... When I met Steve in 1997, it was such an honor. We got to practice together, and we really locked in perfectly. It’s fun to play with a bass player who is able to follow every little nuance that you do on drums. He picks up on every little roll and every little cymbal accent that I do.”

While Christy has been involved in numerous projects over the years (including drumming on former Prong guitarist Monte Pittman’s new album, Inverted Grasp of Balance, alongside bass legend Billy Sheehan), he’s most at home with Charred Walls of the Damned.

“It’s very satisfying for me as a songwriter and a drummer to have this band. There are certain songs where I allow myself to go crazy on the drums, like the song ‘The Soulless,’ and there are other songs where I want the song to kind of shine through, with the vocals or the guitar or something, so I’ll lay back a little bit. I’ve learned a lot [about] being a songwriter in addition to being a drummer. By having this band, I’ve been able to really just concentrate [on this as] my main musical thing now… With my day job and this band, I really don’t have a lot of time to play on a lot of other albums, so I am able to focus on Charred Walls of the Damned.”


Considering Christy’s high-profile gig with Stern, it comes as no surprise that the band’s fanbase is expanding beyond traditional headbangers.

“Howard played our new song ‘The Soulless’ and he really liked it. I was freaking out; I was so happy that he liked the song. It’s cool when you can get people who wouldn’t normally listen to Metal to like one of your songs. That’s always pretty awesome. A lot of people who listen to the Stern show have reacted very positively to Charred Walls of the Damned, especially ‘The Soulless.’ I’m really psyched about that. It’s a challenge to write a Metal album that Metalheads are going to love, but also [one that] maybe other people who normally wouldn’t be Metalheads would love.”

As Christy continues to earn international recognition as one of the strongest drummers in today’s Metal scene, he is quick to offer credit and respect to those who inspired him.

“[Cynic/Human-era Death drummer] Sean Reinert is a massive influence on my playing. When I heard Human, I was just totally blown away. I got it right when it came out. I was also a big Cynic fan. I remember hearing their demos back in the late ‘80s. I was already a huge fan of Sean Reinert’s drumming, and then I heard him on the Human album and was just blown away. Immediately, I started practicing to that album, and it became a huge influence on my drumming. I’m also a huge fan of Watchtower; I love that technical-type drumming in a Metal environment. [Their 1989 album] Control and Resistance is a huge influence on me as a drummer and as a songwriter. [Watchtower] were melodic and technical and heavy all at the same time. That’s kind of what I’m trying to achieve with Charred Walls of the Damned, although we’re not nearly as technical. But I like to throw a little craziness in here and there as kind of a tribute to bands like Watchtower.”

Christy also cites Alex Marquez’s drumming on Malevolent Creation’s 1992 classic Retribution as a turning point in his development as a player.

“He did these rolls with the toms and the kick drum that just blew me way. I immediately wanted to learn how to play rolls like that, and I still play rolls that are influenced by him. [Also], when I first heard Morbid Angel’s Covenant and [drummer] Pete Sandoval, that [became] an album I practiced to all the time. Cannibal Corpse’s Tomb of the Mutilated was a huge influence on me as a drummer. Then, when I heard Gene [Hoglan] on [Death's 1993 album] Individual Thought Patterns… I was already a huge Gene Hoglan fan from Dark Angel. I remember the Ultimate Revenge 2 video that had Death, Dark Angel, Forbidden and I think Raven. I was just mesmerized by Gene in that video. I’ve always been blown away by drummers who have kind of an open-handed drumming style, where they play right-handed but they lead with their left. I think that’s amazing when a drummer’s able to do that. When I heard Gene on Individual, I was blown away. But then when I heard [1995's] Symbolic, I was completely floored because – especially on the first song, ‘Symbolic’ – he does these crazy ride cymbal/double bass fills. I didn’t know what the heck was going on! (laughs) It took me forever to learn how to do that. Luckily, by the time I actually joined Death, I had practiced to all of Death’s albums for many years, so I was pretty prepared. It was still a challenge playing Sean’s and Gene’s drumming parts, but it was a fun challenge because I’m such a huge fan on those guys.”


Although Christy is firmly focused on the here and now with Charred Walls of the Damned, 2016 is a significant year in the history of Death. In addition to this December being the 15th anniversary of the untimely passing of Death leader Chuck Schuldiner, this November will bring the vinyl reissue of Christy’s album with the band, The Sound of Perseverance. Looking back at his time with Schuldiner and the rest of the lineup during the Perseverance era (including late bassist Scott Clendenin, who passed away last year), the drummer is quick to express his fondness for his departed friend.

“Chuck was such a humble, down-to-earth guy. If he knew that Metal fans are still listening to his music every day and still talking about him like we are, he would be so honored. I think the fact that he left so much great Metal music is such a great legacy to have. Also, his lyrics meant so much to so many different people. He was such a poet, and his lyrics are so beautiful. That's another great legacy of Chuck’s that he left us – just these beautiful, really deep, meaningful lyrics. I remember when I was in the band, he got a book in the mail, and it was from a fan from Iran who published a book of [Chuck’s] lyrics. It was going to be in like 50 different libraries in Iran, and they considered it poetry. Chuck was so honored by that. I’m so honored that I was in the band with Chuck, Scott and [guitarist] Shannon [Hamm] and that people really regard The Sound of Perseverance as a classic. I’ve got to give thanks to Relapse [Records]; they’ve been re-releasing a lot of Chuck’s music and really doing an awesome job with it. Also, Chuck’s family and [Death manager] Eric Greif have been really making sure that Chuck’s music is out there for the fans, and they’re keeping his legacy alive. It’s great that Chuck had such an awesome family and friends, and I’m so glad that people are still able to appreciate his music.”

Thankfully, Christy is one of many former Death members whose current endeavors are keeping the spirit of the band alive. As you’ll hear soon enough, Creatures Watching Over the Dead is one of the most blistering listening experiences you’ll have this year.