It’s nice being the bearer of good news.

When I got on Skype with Delain mastermind/keyboardist Martijn Westerholt in early August, I had the pleasure of being the first person to tell him that the band’s hit video for the song “Suckerpunch” had surpassed 1 million views on YouTube. There are great bands all over the world releasing music and putting up videos in the hopes of having that kind of success. Why did “Suckerpunch” end up being such a smash for Delain?

“I would drive a very big Porsche and live in a very big house if I knew the answer to the $1 million question in the music industry,” Westerholt replied with a chuckle. “But I think it’s because it’s a good [representation] for us as Delain, because all of the elements you can find in our music can be found in that song. There are electronic elements in there, there’s riffing going on, there’s melody going on. It’s Poppy, but it’s also Metal. There’s also orchestration going on. I think it’s a perfect mixture and blending of all these elements. You don’t see a lot of electronic and orchestral elements coming together in one song most of the time in music, but I think in this case, it really worked out. When it comes to the video, it’s nowadays so necessary to be present on YouTube; that’s the way to go. The times of TV are far past us. (laughs) It’s great to know we hit 1 million views already.”

(Of course, this isn't Delain's first video to hit seven digits. Their 2014 clip for “Stardust” had reached nearly 5.3 million views at the time of this writing.)


The success of “Suckerpunch” is one of many achievements in the Dutch band’s incredible 2016. In addition to celebrating their first decade as an active band, Delain (who are fronted by captivating singer Charlotte Wessels) issued the Lunar Prelude EP in February. The released marked the first appearance of “Suckerpunch,” which also appears on the band’s recently released fifth full-length studio album, Moonbathers. 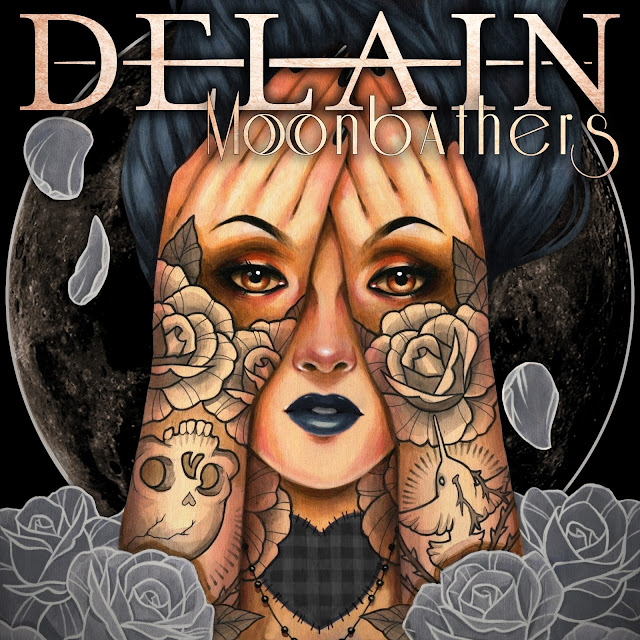 High-quality album art has been a staple of the Delain experience since the beginning, and the packaging for Moonbathers is no exception. The album’s unforgettable visuals are courtesy of artist and longtime band collaborator, Glenn Arthur.

“I think his work is a good translation for our music,” Westerholt shared. “[His work] looks like it’s really sweet, but it’s very dark, like having cupcakes with hand grenades in them, for example. That’s something that really appeals to us. We chose visual art that had the moon in there because of the title Moonbathers. It also has to do with the lyrics. Because of the way Charlotte writes the lyrics, it’s always pretty dark but there’s always some positivity in there as well. It’s like a light in the dark, and what’s a better symbol [of that] than the moon?”

Known for fairly regular lineup changes, Delain is currently comprised of Westerholt, Wessels, bassist Otto Schimmelpenninck van der Oije, guitarist Timo Somers, drummer Ruben Israel and second guitarist/newest addition Merel Bechtold. Although Bechtold was unable to contribute to Moonbathers due to time constraints, Westerholt feels that she is making a great contribution to the band in a live setting.

“She joined us January last year on a tour. She was just filling in for Timo and the time, but it went so well that we decided to ask her to join the band permanently as a second guitarist. She still had to tie up some loose ends in what she was doing at the time. She was also busy with two other bands and following a Dutch education called Rock Academy. She had to focus on these things, and she didn’t really come around to help us with the album. That’s not really the way Delain works anyway. I always see Delain as a train that’s just rolling. As a band member, you can hop on; you’re very welcome to hop on. We really encourage that. I’m talking about hopping on in terms of contributing to an album. But it’s coming there anyway, because the core writers are me, Charlotte and Guus [Eikens, past guitarist]. Guus is not in the live band, but he always has been part of Delain. We free-write everything, and we don’t really think about, ‘How are we going to pull this off live?’ The sky’s the limit with the creative process; that’s how it should be. We are encouraging the band members to be involved in it. It’s not a must-have, but it would be very desirable. Actually, Timo told me recently that he’s really proud of this Delain record because he was really able to put his mark on it. I hope the same thing will happen with Merel with the next album.”

While Moonbathers is Delain’s official 10th anniversary release, diehard fans know that the band’s history actually dates back to 2002, when Westerholt (fresh from fellow Dutch act Within Temptation) put together a tentative version of Delain with singer Anne Invernizzi and recorded the Amenity demo.

“I really saw that as a test phase. That’s also why I say we’ve been here for 10 years and not 14 or 15 years like the Wikipedia page says. I saw [that version of Delain] as a start-up and looked at it as the way to go, but it wasn’t the way to go. So I went back to the drawing board, then we released our debut album [Lucidity] in 2006. I really see that as the initial start of the band, the project and Delain as an entity. Before that, it was much like searching, developing and seeing how things would go.”

Where things went for Delain was the development of an international fanbase that has far exceeded Westerholt’s expectations.

“I consider ourselves really lucky to have such a loyal fanbase. Because of that, we’ve been around for 10 years; because of that, I can do this as my job.”

Above all, Westerholt’s goal for Delain with Moonbathers and beyond is to have fun every step of the way.

“That’s the most important thing. If you’re having fun, you radiate that on stage and in your music. How can you let people enjoy it when you’re not enjoying it?”