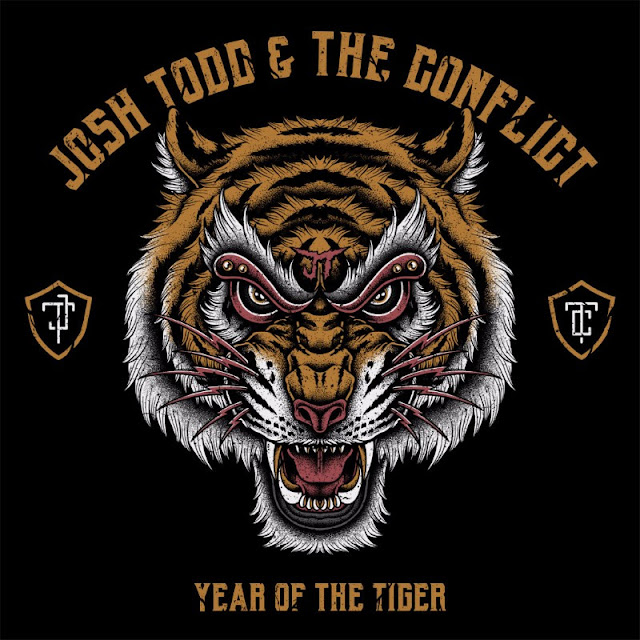 Most people mellow with age, but most people aren’t Buckcherry frontman Josh Todd.

Out September 15 on Century Media Records, Year Of The Tiger is an album much closer to ’90s NYC underground groups like Electric Frankenstein and D Generation than the band that gave Todd his first taste of fame. In addition to boasting f-bombs galore, the album finds the singer fronting a band that is as savage as they are solid. For starters, have a listen to Stevie D.’s Zakk Wylde-esque guitar pings on “Inside,” then marvel at how gut-punching Winchester’s Bad Brains-precise drumming is all over this thing. After that - when you feel your head and blood pressure needing a break - try on the radio-friendly “Rain” or the group’s cover of Prince’s “Erotic City.”

Year Of The Tiger’s arrives at the end of one of the tumultuous times in Buckcherry’s 22-year career, a rocky era that saw the departures of original guitarist Keith Nelson and drummer Xavier Muriel earlier this year. What does the future of Buckcherry look like at this point? Where does Josh Todd & The Conflict fit into Todd’s career goals? I tackle these and other questions with the man himself in the following interview.

Obviously, you have a full-time band and you’ve done some other things project-wise in the past. I’d imagine you have a pretty bust schedule as it is, so how did this Conflict project take shape?

It started happening last year. I was on the road with Buckcherry. Stevie and I were walking through a Target parking lot, and I was like, ‘Hey, man. I need to find somebody who can make some beats.’ He said, ‘I can make you beats.’ I said, ‘Oh, yeah? Make me a beat!’ We proceeded to start writing a lot of songs together for this project called Spraygun War, which was a clothing company that I had started; I always intended to put music to it. So we made an EP; we were out on a road, and we basically did it on a laptop. We had a lot of fun doing it, and my intention was always to make a Rock record. Buckcherry was kind of in disarray; there were a lot of things that weren’t decided at that point, and I’m like, ‘I’ve gotta make new music this year.’ Basically, Spraygun War kind of morphed into Josh Todd & The Conflict, and we started writing really heavily when we got off the road last year in November.

Musically, this is a bit on the heavier side compared to Buckcherry. What can those who know most through Buckcherry expect when they pick up this album?

It’s basically my roots. Stevie and I have each known other since I was 19. We wrote all the songs together, and he knows my background and where I came from. I grew up in Southern California; my foundation was independent Punk Rock records. I wanted to make a more aggressive record that didn’t have traditional tuning on the guitars – something heavier. Stevie knew exactly what I was going after. He would just come up with these great compositions, and I would just be off to the races with lyrics and melodies. It’s just more along the lines of my foundation.

Where do you see The Conflict in the grand scheme of things in light of the ongoing Buckcherry thing?

I always wanted two bands that I could work that had two different flavors. I could work one year on one band, and then the next year on the other band. I like to work, you know? You can’t just continue to hammer the road with the same product all the time – not in this day and age. You have to be diversified. If I was making the amount of money that some of the top bands are making where they can just sit home for a year and pay all their bills, it would be a different story. That’s not my situation; I have to work. I love to work, and this is my labor of love. I created The Conflict so I could give Buckcherry a rest and create something that was inspiring for me and something that I could build – and that’s what’s going to happen.

The album’s coming out on Century Media. I’m always curious when I talk to artists who got their careers rolling right when the industry was changing and becoming more digital-based with Napster and what have you. We’re a good 17 years into that, and the industry’s a lot different now than it was when the first Buckcherry album came out. For you, why was it advantageous to go with a label for this as opposed to doing it home-grown using Facebook or any of the other things at your disposal as an independent artist?

We kind of did that with the Spraygun War EP, and it fell flat for us. We have big intentions for this, and we want a big machine behind it and a worldwide situation going. We’re touring on this; we’re going to make more records. It’s just a different thing. I’ve got a lot on the plate – I need help. I need somebody who can take over those situations. I can’t get to everything, you know? It becomes a big load for me as an artist to sing and write the songs, record them and coordinate where I’m going to be. That’s when things start falling through the cracks. At the end of the day, you’re like, ‘How did this record cycle get to be so shitty?’ And you’re like, ‘Oh, because you weren’t paying attention to enough things.’ So we wanted a great record label in place that we could have a great relationship with and that could really handle radio and the things that we’re not paying attention to on a daily basis when we’re out working. That’s why you have a label – to help you with kind of stuff and the distribution and all that as well.

I want to touch a little bit on Buckcherry, because I know there have been some recent changes internally with the band. For those people who are curious where things are, how would you best characterize the current state of affairs within the band and what you’re hoping to do moving forward?

Buckcherry is in the best place it’s been in a long time. Basically, for the last three years, it just wasn’t really a band. We weren’t connected; we didn’t have any synergy anymore. There wasn’t that magic there. We were just kind of going through the motions, and it sucked, honestly. The changes took place, and they were great changes. I know that a lot of people who were close to the band were kind of bummed out about it. Some people were fine with it, but I got new players. Sean Winchester’s on drums, and we've got Kevin Roentgen on guitar. The band’s got the best players it’s ever had; the live shows are going off. We’ve done a lot of shows with the new lineup, and it’s just in a great place. It’s so weird because I have these two great bands, and I have to be diversified as far as giving Buckcherry a rest and then tending to this other project so that Buckcherry can thrive. I want The Conflict to thrive as well, so you have to get time away for each project so that it can do that.

You’ve had a long-running career at this point with Buckcherry, and you’re still trying new things with this new project and other stuff you have going on. It’s becoming more and more difficult to build that kind of career in this industry. For you, what was been the key to longevity and survival in this business?

First of all, I think the key to it is to remain teachable – and you’ve got to be passionate. If you’re not passionate, you shouldn’t even do it – especially now, because it’s become a lot more challenging. I know this just from starting something from the ground up again. There are so many things that I’m learning through The Conflict that I didn’t even know about as far as getting a brand happening again from nothing to something. It’s like, ‘Wow! Things have changed.’ I established my brand with Buckcherry, and there was always an audience to go to. Now, it’s like the great news is I’ve got this great record; the shitty news is that I have to kind of establish an audience. I’m going to get some Buckcherry people, of course, but I want a new audience as well. In order to do that, I have to find it and get in front of the people, and we’ve got to play the shows. That’s the challenging part right now. We’ve got to really get on a great package tour. These bigger bands know who I am, but they don’t know what this is. I have to be patient and wait for the record and the awareness to get out there.