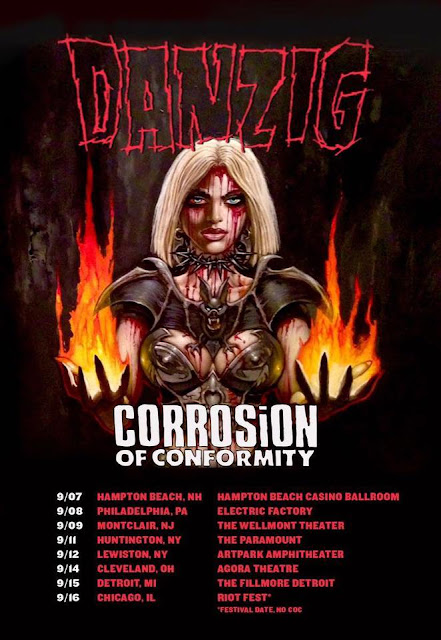 Forty springs ago, Lodi singer Glenn Danzig and the first proper version of The Misfits made their live debut at CBGB. In the years that followed, he built a solid career and international following by adding his persona and rich voice to some of the most incendiary Punk and Metal material ever conceived. With a strong new album with his long-running namesake band (this year’s Black Laden Crown) and another live reunion of the “original” Misfits looming, the man is experiencing a new career high at a time when most people with his kind of track record take a back seat and collect whatever’s left of their royalties. The ongoing relevance of what he has created in the world of music was felt in every note delivered from the stage last night at the Hampton Beach Casino Ballroom in Hampton, NH.

First, let’s get the obvious concern out of the way. While live performances in recent years occasionally revealed elements of strain in his voice, Glenn’s vocals soared on this night, often reaching heights in intensity not heard since the tour for I Luciferi 15 years ago. No one should reasonably expect a sixtysomething singer to hit the target with his pipes the same way he did in his mid-20s (and Glenn is certainly not of the same vocal strength these days as he was on The Misfits’ “She” in 1977), but what he gave last night still stood head and shoulders above most heavy music belters half his age.

Of course, singers are at their best when they have a great band behind them, and Glenn’s success at Hampton Beach was helped along tremendously by the veteran players he’s selected to fuel his band. The singer’s longest-running bandmate, bassist Steve Zing, has been in the band for 11 years and first began working with Glenn all the way back in 1983 as the original drummer for Samhain. Before that, he drummed for the Misfits-inspired New Jersey Horror Punk act Mourning Noise. Later, he played in The Undead with former Misfits guitarist Bobby Steele for a number of years before venturing off on his own to front a series of bands including Marra's Drug and (currently) Blak29. Before joining Danzig in 1996 for the first of many stints with the group, guitarist Tommy Victor cut his teeth in the early '80s NYC Noise scene (via a slew of bands including Radiant Boys and The Keeper) before settling into his ongoing role as the leader of Prong. Once the powerhouse drummer for post-Slow, Deep And Hard/Origin Of The Feces-era Type O Negative, Johnny Kelly has kept the beat for Danzig on a fairly regular basis since 2002. Together, this trio of musicians represents Danzig’s longest-running lineup and the incarnation that most meets (and sometimes surpasses) the intensity of the original band represented on the first four albums. The finesse they have perfected by playing together for so long was on clear display throughout the evening. Kelly added a near-Funk bounce to a punishing “How The Gods Kill,” while Victor is the first guitarist since John Christ to truly inject his own style into the Danzig formula.

While the inclusion of “Mother,” “Twist Of Cain” and show opener “Skincarver” are an absolute given at this point in Danzig’s career, the Hampton Beach show benefitted from the addition of deeper cuts like “Not Of This World” (from 1988’s Danzig), “Black Mass” (from 2002’s I Luciferi), “Do You Wear The Mark” (from 1992’s How The Gods Kill) and “Long Way Back From Hell” (from 1990’s Lucifuge). While the show gave all fans in attendance what they came for, the night truly belonged to the diehards. And even when “Black Mass” went temporarily pear-shaped due to some onstage flubs, the band’s adrenaline level remained intact. (The blunder also gave Glenn a chance to remind audiences that – unlike a lot of bands hitting stages in 2017 – his band doesn’t use backing tracks and other onstage trickery to make their point. It takes a performer quick on his feet to turn a fuckup into a cheer-inducing fuck you. Well played.)

It’s been a long road for Glenn Danzig, but what he continues to accomplish on record and on stage proves that he's still living by the rulebook he wrote for himself four decades ago in a working class neighborhood in New Jersey. Few musicians ever rise from the Garden State with any legitimate and long-landing results. The show at Hampton Beach showed us exactly how and why this guy did.